Why is Hill Population Less Affected From COVID 19? By Binny Yadav 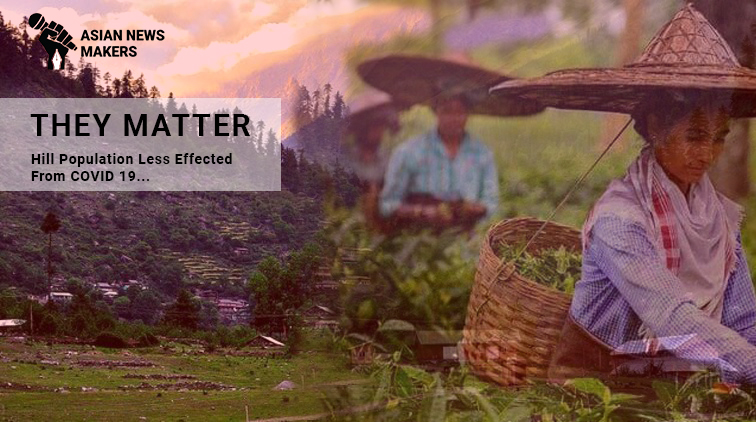 The pattern leads us towards finding permanent cure for COVID 19 and many more such fatal future diseases. Human race is too strong to be hostage to tiny viruses and bacteria.

Is there a pattern to Covid 19 infection? As the corona cases surge and the deaths too, all over the world, surprisingly there are also the places which have negligible cases and no deaths in spite of the mixing of population and complete failure of social distancing.

Going by the patterns of corona, studies are emerging which claim that people of plains are more prone to not only Corona virus but all sort of virus, bacterial and co-morbid diseases. If the pattern can be established, it can be a big leap towards finding the causes and remedies of many such diseases in future and situations like ‘corona pandemic’ and the millions of deaths could be avoided.

While we search for cure and vaccines amidst the motivations of ‘Be kind, be calm, be safe,’ from certain health officers like Dr Bonnie Henry of British Columbia, the pattern can’t go unnoticed as to why certain places have numbers soaring with each counting minute whereas many places have none or very less despite high possibilities of the infection.

In India corona is spreading fast and situation is getting critical each day but surprisingly it has certain neighbours like Bhutan and Nepal where in spite of their poor health care facilities and porous borders with India have very less or negligible corona cases. Bhutan till the writing of this piece had zero death and 59 positive cases and 18 recoveries while Nepal had 4085 cases and 15 deaths.

In an interesting observation it is noticed that population of high altitude have less or no effect of Corona virus. If the proportion of cases and number of deaths are taken into consideration even after the mixing of migrants’ population-coming from corona infested metro cities like Mumbai and Delhi, with the local residents, number of Covid cases are not showing much in hill region in comparison to plains and this is a significant difference.

Cities like Delhi and Mumbai in India have alarmingly high Covid numbers and it was expected that some smaller cities, towns and villages too would soon witness the similar patterns because of the migrants’ population which have travelled from these big cities back to their native places. But surprisingly the number of corona cases did not spread equally in plains and hilly regions.

It has been observed that in the population residing beyond the height of 2000-3000 meters the effect of corona is negligible. Dr Bindhey Wasini Pandey, who has been studying the Himalyan region and its population on higher altitude for past ten years insist that there are specific reasons for this which cannot be ignored.

Dr Pandey, whose main focus has been to study the pattern of Corona in hill region emphasises that states like Sikkim, Arunachal Pradesh (AP) and Himachal Pradesh (HP) have very low number of corona cases in comparison to Uttarakhand (UK). Even in Uttarakhand, which too is majorly a hilly region 90 per cent cases are concentrated in lowland areas of Haridwar and Udham Singh Nagar.

“Although HP & AP had least out-migration in comparison to UK which has the cases above 1000-majorly in low lands, explaining the difference in pattern of Corona. But if we compare the surge of corona cases between UK and Bihar and UP after the reverse migration from Delhi and Mumbai the ratio is far less in UK. Hence it can be said that people of plains are more susceptible to Covid 19 in comparison to people residing in higher altitude. There are however other factors too to support the conclusion”, explains Dr Pandey.

AP had 47 cases and zero deaths while Himachal Pradesh had only 410 cases and five deaths till 9th June. UK had 1380 cases and deaths mainly in lowland areas when number of cases surged faster in Bihar with 4915 cases and 30 deaths and Uttar Pradesh (UP) with 9733 cases and 257 deaths during the same period.

Does the low number of cases in Sikkim (seven cases and zero death)-a hilly state, can also be attributed to the similar reason? Is there a pattern that the corona effects certain geographical population? And is it worth noticing?

The pattern is not limited to India only and there is a similar study published in ELSEVIER journal which has analysed epidemiological data of Covid 19 in high altitude region of Tibet, Bolivia and Ecuador comparing it with low land data. “Available data suggest that physiological adaptation that counterbalance the hypoxic environment in high-altitude may protect from severe impact of acute SARS-CoV-2 virus infection”.

Is the hill population stronger?

According to Dr Pandey, there is an innate immunity towards all viral and bacterial diseases in hill people because of the special geographical and environmental reasons. Hill population have adopted to a condition called ‘Hypoxia’ because of low ‘Barometric Conditions’ on high altitude. He explains that lack of oxygen makes the people of hills stronger. There are no evidences of corona cases beyond the height of 3000 metres, he says.

The other important factor which contributes in high altitude population is the strong Ultra-Violet rays. Because of the density of atmosphere, impact of UV rays would be more which might affect the capacity of virus to impact the human population. “At high altitude UV rays are stronger and the impact of corona is less”, explains Dr Panday.

The other reason for corona not effecting the hill population can be the local atmospheric conditions due to which people are generally healthy and remain largely unaffected by viral and bacterial infections. Due to barometric effect and lesser oxygen level local people are more resistant to diseases.

How can people in plains achieve such health conditions?

This is true that people of hills have different anatomy due to their special living conditions. They have to walk not less than 20-25 kilometres daily that too on high and steep slopes amidst low oxygen level and high barometric conditions. This special condition makes their heart stronger and lungs lengthy.

These populations also have stronger immunity because of pure air and fresh spring water and these two things are a great luxury for people who live in plains and cities.

The experts who are studying the cause as to why hill people are less effected by pandemic and epidemics have also concluded that low immunity due to air pollution and poor water quality along with sedentary lifestyle makes the population of plains specially metros more susceptible to any diseases not only highly fatal diseases like Corona.

Pattern of Covid infection have proved these findings as it is affecting those with low immunity and those who have comorbid conditions like heart problems and dybetese, both are considered to be life-style diseases.

So, the pattern of corona has a lesson for the government and the people. We need to have excellent immunity to fight the diseases and this can’t be achieved with good food only. We clean air, clean water and lots of physical work. The example is already in front of us from British Columbia, a Canadian province, which has successfully fought corona and major reason is attributed to responsible governance, law abiding people and healthy life choices.

Once the world overcomes Corona, policymakers and stake holders (the people) should come together to achieve this goal of clean air, clean water and healthier people so that mankind is not hostage again and again to something as tiny as COVID 19.