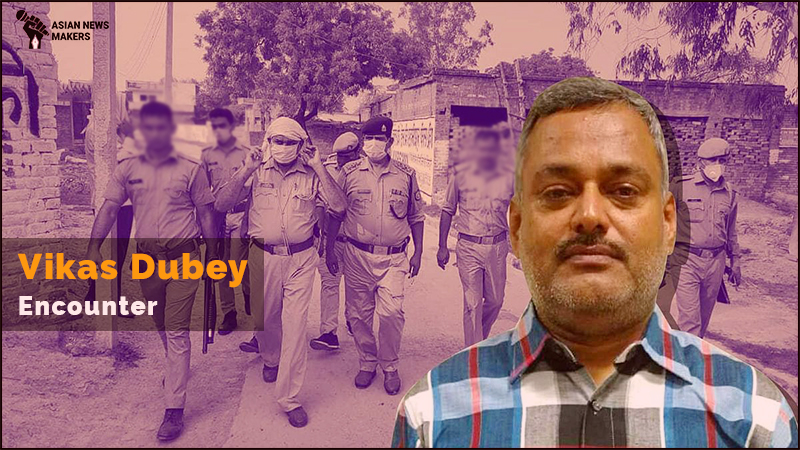 Vikas Dubey encounter doesn’t end the story. The series of events following the death of eight policemen in Kanpur allegedly by Vikas Dubey seems like a scene of any Indian film where a dreaded gangster, whose stature and clout reaches beyond administrative and political control is killed to protect the nitty gritty of the nexus. The encounter is the beginning of long list of questions not only on the system of administration but also on the criminal justice system of India.

Encounter of Vikas Dubey which followed the series of encounters of his confidents and aids might be an end of the gang and the gangster it definitely is no end to the networking of crime and criminals with the power-hungry politicians till there is an overhauling of criminal justice system of India. it leaves thousands of questions rather than answering even a single question.

Encounter may be an end of one dreaded gangster Vikas Dubey but there are many who may be ready to replace him and witness the same trail of events before meeting the same fate, the encounter.

Amidst the let loose of media trials and post-mortem of police theories and explanations, the fact remains that these criminals with a long list heinous crimes to their credits never have public sympathies. They thrive on administrative support and political nexus.

The fear which they spread in public and the control they flaunt over administration and police has the only important resource line called politics and politicians. This is a typical symbiotic relationship where each partner is a vital source of survival for the other. But in this symbiotic nexus between the crime and politics the power to call off the relationship rests with the most powerful one-the politician.

Ironically this power which makes this criminal-politician relationship tilted on one side emanates from the crime. Encounter of Vikas Dubey, may look like a breaking news moment but it is nothing but an end of one of these many symbiotic relationships which thrive on the ambitions of power-hungry politicians.

Questions Once Again on The Criminal Justice System of India

Police theory of encounter in self-defence appeared too loose and repetitive and easily relatable with many Bollywood films like Jolly LLB, Raees, Vaastav etc making a clear mockery of criminal justice system in India.

Right from his life till his death, the rise and fall of Vikas Dubey exemplifies the failure and denial of criminal justice system. His daring act of murdering a law maker in broad-day-light in a police station in presence of policemen when no one, not even policemen came forward as a witness and nothing was done by even the police department to bring in justice to the man who died is the proof enough how such criminals are being shielded and nurtured for political vendetta and aspirations and in return assured protection from the law.

Lack of action by the administration and police develops this unrestrained confidence in criminals by not only encouraging them for future but also making them noncompliance for the law and justice system.

In life Vikas Dubey like gangsters live on their own rule of law, ruling like a king and enjoying their own empire giving least heed to the system of law of the country. They have their own army of goons and armoury and their own kingdoms which thrive on the protection of local police and administration through direct intervention and instruction from the politicians in power.

Brutal killing of eight policemen on July 3rd in an ambush who went on to nab Vikas Dubey is the evidence of how such criminals after a point become not only bigger than any system but also start dictating the system. They are in fact one parallel and an independent system of law.

This is the point where they become dangerous for their protectionist lords, leaving no choice but to be eliminated as they become too big to be contained.

The other usual path for them is the politics which becomes their permanent shield. The criminal in them doesn’t die but it survives by nurturing the crime and creating another line of criminals who maintain this vicious circle of nexus at the cost of criminal justice system of the country

There is no denying the fact that criminals like Vikas Dubey—with 62 criminal records including five murder and eight attempts to murder should be held and punished grievously for their unpardonable crimes. The criminal with a long track record of crime and creating fear amongst the people deserve to be punished to provide justice to the victims.

But instead of being caught and punished their clout keeps growing and they remain scot free till either they are encountered like Vikas and his aids or if they happen to survive, they are adopted by the political system which help these criminals survive and grow thus continuing the chain of criminal-politician nexus.

Vikas Dubey had a long criminal track record but never convicted. In 1999 Dubey had allegedly killed Jhunna Baba and grabbed his land, in 2000 he was accused in the murder of his teacher and retired principal of local Tara Chand Inter College and the most notorious was the alleged murder of a BJP leader, who had minister of state rank. Vikas Dubey allegedly chased him inside a police station in Kanpur and shot him dead in broad day light in presence of policemen.

The encounters instead of the trial and conviction of such criminals with background of heinous crimes is a clear mockery of ‘criminal justice system’ of the country.

The criminal-political-administrative nexus not only thrives on the failed and incompetent criminal justice system but also demeans and makes a mockery of democratic system. Either way the justice is denied to the people.

Till the time the symbiotic criminal-politician relationship is maintained it exploits the people and their rights and when this relationship ends it denies justice by way of curtailing the rights of the people to know about the nexus which was responsible for denying the justice to the people.

The encounter of Vikas Dubey and his accomplice has denied justice to those who were victim of his crime for years. The events which followed the encounter seems no less than a part of some film script which has been repeated many times to suit the theory of police.

The obviousness of the police theory triggers thousands of questions and raised eyebrows. The most important one being why and how the gangster like Vikas Dubey led a free life without any fear of law and order despite his open challenges to the system and the most important one- why could not the proper procedures of protection under law followed to protect the criminal of the likes of Vikas Dubey so that he could have been charged and put to trial and convicted. Why was he allowed to be killed?

At least some justice should have been delivered if not denied had Vikas Dubey not been killed under dubious circumstances. It is high time that the criminal justice system is put to test and brought to the track so that justice is delivered and not denied again and again in want of police and administrative appropriateness. It is also the time to reform and make the criminal justice system and make it more transparent so that it is not exploited to safeguard the political stakes of power seekers.

Encounter of Vikas Dubey should not be an end but the beginning of introspection and correction of the ailing system.

Who is Xi Jinping: The Man, His Life And Politics By Nirendra Dev