Swamy Being Swamy!! By Nirendra Dev 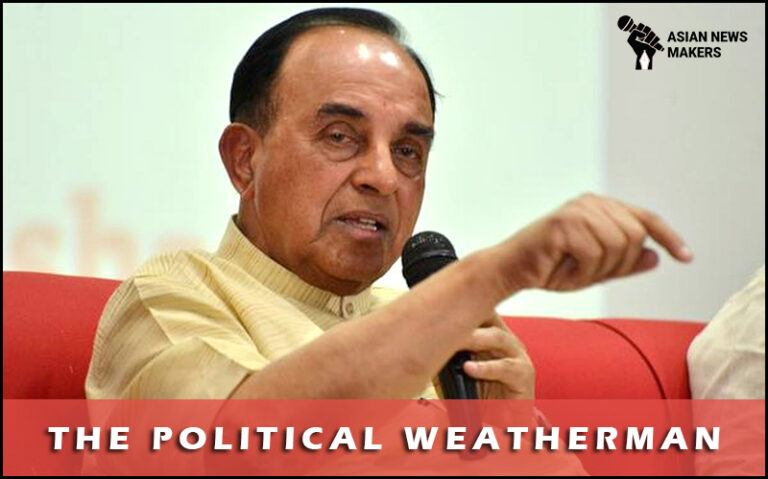 He stood by Late Chandrashekhar and became his Law Minister after VP Singh government was voted out.

He went against Atal Bihari Vajpayee and was instrumental in bringing Jayalalitha and Sonia Gandhi together by hosting the famous tea party to bring down the NDA dispensation in 1999.

But his honeymoon with Congress and Sonia Gandhi – directly and indirectly – was short lived.

He blamed Arjun Singh for the failure of the opposition parties to form an alternative regime in summer of 1999.

He went against Sonia and Congress party tooth and nail and brought a series of allegations against Sonia, her son Rahul and also the grand old party.

He demanded that the Lok Sabha Speaker (then Manohar Joshi of Sena) should refer to the ‘Ethics Committee of the House’, complaints of alleged falsification of Sonia’s educational qualification.

During the UPA regime, he took up the fight on the 2G spectrum in a big way and in the run up to the 2014 polls, his fledgling Janata Party merged with the BJP. He became a Rajya Sabha member in April 2016.

In fact, with regard ‘The National Herald case’, Dr Swamy is leading the litigation and Sonia and Rahul Gandhi are on bail now.

As per the complaint filed in the court of the Metropolitan Magistrate, Associated Journals Limited (AJL) took an interest-free loan of Rs 90.25 crore from Congress party. It was alleged that the loan was not repaid and the rest of the row relates to a company called ‘Young Indian’.

Much to the delight of BJP leaders and Sonia Gandhi-critics in social media, on December 7, 2015, the Delhi High Court ordered Sonia Gandhi, Rahul Gandhi and five others to appear in person before the trial court.

They did not appear in the court and, on their lawyers’ request, the trial court ordered them to appear before him in person on December 19. Later, the Patiala House court granted bail.

But lately, Dr Swamy seems to be not so happy with what is going on in India’s ruling establishment.

He has flayed GST and demonetisation in the past. More recently, he urged BJP chief J P Nadda to sack Amit Malviya as the IT cell chief for trolling him. However, in the reshuffle announced by Nadda last week, Malviya has been retained.

Dr Swamy took to Twitter and posted: “Now that Malviya has been reappointed, I have this to say: My earlier tweet was to test whether Malviya financed fake ID tweets on his own or not. Now it is clear. PMO Haren Joshi was behind it. I have written to PM two weeks or so ago bringing this to his notice with documents.”

Sources said there is no PMO official by that name. Of course there is another ‘Joshi’. The crux of the issue is not a mere official. The question in discussions in political and media circles is – whether Dr Swamy is done with the Narendra Modi regime too.

In 2018 itself, he had castigated demonetisation and the Goods and Services Tax (GST) “There is definitely a feeling among businesses that there is tax terrorism and this needs to be corrected,” he had said at the 14th Annual India Business Conference at Columbia Business School hosted in New York.

Possibly the target was Arun Jaitley – the then Finance Minister and now deceased.

In January this year speaking at a ‘New Indian Express’ event in Chennai, Dr Swamy targeted incumbent Finance Minister Nirmala Sitharaman and said: “Economics is a macro subject where one sector has an impact on the other sector impact. That you have to understand. You can’t just go to JNU, get a degree and learn anything”.

Ms Sitharaman is an alumna from JNU.

In fact, the Rajya Sabha MP went on to say Prime Minister Narendra Modi does not understand economics. “Tell Mr Modi to try and experiment with me”.

In politics, Dr Swamy is often rated as a someone more than the ‘weatherman’ who can read well how things could turn at the end of the tunnel. In effect, he often turns out to be a force who changes the weather.

Or is it all in media speculation only?

Last week of September he surprisingly penned a letter for Lok Sabha Speaker Om Birla and requested him to change ‘Parliament records’.

In his letter, Dr Swamy said the Congress chief responding to his earlier complaint about her qualification ‘admitted that it was an error’. Sonia earlier claimed she had obtained a Certificate in English from the University of Cambridge.

“Therefore, please take appropriate action to rectify the record of Parliament…..in the interest of maintaining the dignity of Parliament, please censure Ms Sonia Gandhi if appropriate if it is found my allegation is well founded as per past records of the Speaker’s office”.

Like cricket, in Dr Swamy’s politics too – nothing is final till the last ball is delivered. And perhaps even the slog overs has not started yet.