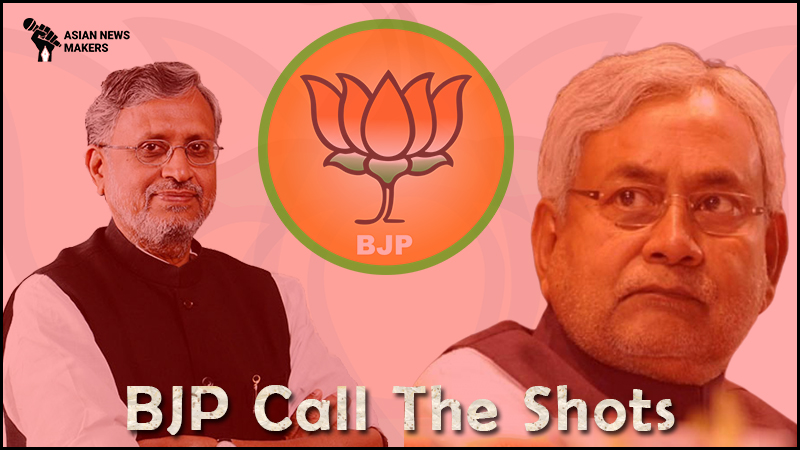 The ensuing Rajya Sabha election in Bihar may have easy sail for the BJP. But that’s not ‘big news’; the real big event would be Sushil Kumar Modi’s shifting base to central politics.

The BJP in Bihar – especially a section of high command and younger leaders in the state – want the Chief Minister’s post for the saffron party.

These BJP leaders are in a belligerent mood as they believe the recent polls have made it clear that the BJP is dominant force in the state and its partner JD(U), which lost many seats, should easily now bow to the BJP leaders.

The BJP leaders also feel the NDA could return to power in the fiercely contested assembly elections mainly due to the ‘charisma’ of Prime Minister Narendra Modi.

So it is final, former Deputy Chief Minister of Bihar and Nitish Kumar’s long-time associate, Sushil Kumar Modi, will now shift to the central politics.

Now all eyes will be on the possible expansion of the Narendra Modi cabinet in the centre and perhaps Sushil Kumar Modi will also perhaps make it.

It was then speculated that probably Sushil Kumar Modi would be shifted to Delhi.

However, there has been a difference, according to observers — that in most instances it has been Nitish Kumar who walked away with glamour and prized positions while Sushil Kumar Modi readily played second fiddle.

Of course, during the height of the debate, Sushil Kumar Modi had tweeted to say: “The BJP and the Sangh Parivar gave me so much in the political life of 40 years. I will discharge the responsibility that will be given to me. No one can take away the post of the party worker”.

Political observers know it well that Sushil Modi’s friendship with Nitish Kumar goes back to 1970s when both of them were active in students’ politics of Patna University.

Of course, both Sushil Modi and Nitish Kumar and also Lalu Prasad had formed the famous troika of younger leaders in Bihar.

Perhaps, Sushil Modi provoked high command’s unhappiness when he had tweeted in support of Nitish after demands were made from within the BJP to replace the chief minister after the Bihar elections – wherein BJP has won more number of MLAs than its partner Janata Dal (United).

“Nitish Kumar is the Captain of NDA in Bihar & will remain its Captain in next assembly elections in 2020 also. When Captain is hitting 4 & 6 & defeating rivals by inning where is the Q of any change,” Modi tweeted on 11 September.

There has been talk about internal conflict within BJP as a number of state saffron party leaders did not agree to Sushil Modi’s decision to openly bat for Nitish Kumar when the JD(U) suffered huge number of loss of seats in the 2020 state assembly polls.

It is said the row was initially kicked off by Sanjay Paswan, who wanted Nitish Kumar to shift to Delhi.

Senior BJP leader Dr C.P. Thakur, a Bhumihar, countered his party colleague and said – “The decision to ally or not to ally or who will be the CM face is to be decided by our central leadership”.

Mritunjay Tiwari, a Brahmin legislator and state BJP vice-president, also said that Sushil Kumar Modi’s views are his personal opinion and not of the party’s.

There would be now anxious moments whether and how the BJP would be able to clip Nitish Kumar’s wings. The BJP has already taken the post of the state assembly speaker and key portfolios like industry and disaster management. The BJP has 74 assembly seats an increase of 21 in 2015. On the other hand, JD(U) has won only 43 seats recording drop of as many as 28 seats.