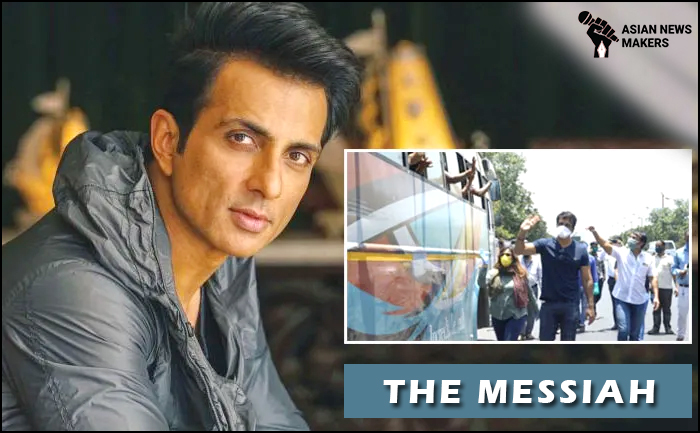 “When a pregnant woman told me that she is going to keep her yet-to-be-born child’s name as Sonu Sood, I couldn’t believe myself. I think this is what is going to be etched in my memory forever”, this was  Sonu Sood, an Indian actor who donned the role of saviour and a great humanitarian when the entire country was under the grip of complete lockdown due to Covid 19 pandemic.

COVID – 19 pandemic effected different countries differently. For India the beginning of lockdown in the end of March resulted in the biggest humanitarian crises and the biggest mass migration the world ever witnessed after the partition of India during 1947.

The migration due to lockdown which opened the hidden seams of the second-largest population of the world also exposed extreme poverty and complexities of survival of those who stood at the lowest strata of social structure- the workers, the daily wagers, who had been holding the burden of informal sector till now but were forced to take miles of journey because the city they build could not support them and feed them during the time of crises.

Those were the times when people like Sonu Sood, who reached out to them was nothing less than a messiah, facilitating what they longed for-the journey back home, food and security and above all-a patient ear for help.

In the times when state machinery came to a grinding halt, supply chain collapsed and even basics like food was not available people wanted nothing but a way to reach their home, helping hand in form of Sonu Sood, who facilitated a journey back to their native places was no less than the hand of ‘God’.

The story of Sonu Sood, an Indian actor and humanitarian who helped lakhs of homeless, hungry and distraught people single handedly during the lockdown period is indeed the philanthropy personified.

On 24th March 2020, the Indian government announced a country-wide lockdown leaving lakhs of people stranded in different states with absolutely no work and food. Due to halting of all the economic activities across the nation, people who were dependent on daily wages struggled to afford even a single meal for the day.

Sonu Sood, along with his friends came out with a food drive – ‘Shakti Annadanam’, to distribute and feed almost 45000 people daily. As early as in April itself when everyone else was still trying to understand the actualities of lockdown, he was already on job arranging and distributing food to stranded people in business capital of India, Mumbai.

Lakhs and thousands of those who suddenly became jobless and stranded in metropolitan Mumbai had no money and food and were left with no option but to take miles of journey on foot to their villages in states like Bihar, Uttar Pradesh, Rajasthan and Madhya Pradesh.

There were pictures all over of small children, old people and even pregnant women walking on road holding their belongings heading for a long foot journeys of 500-700 or more kilo metres.

It was on 9 May when Sonu Sood came across a group of people who were going back to Karnataka and asked them to wait for two days while he arranged some transportation.

Finally, after successful coordination with Karnataka and Maharashtra government, by 11 May he managed to arrange numerous buses which ferried the first 350 migrant workers back to their home town which was a small start to a long journey of buses ferrying thousands of workers across the country.

It was very hard to see families with young children walking empty stomach under the scorching heat. I did not want their children to grow up and remember only the destitutions faced by their parents during one of the most severe times of 21st Century, he said in one of the interviews with a TV channel.

In his various interviews he says that all the things we have today are constructed one way or the other by these helpless workers. Be it be our home we live in or the roads we walk on, and the one time when they want to go back their home safely, have to face all these problems. For him, the true freedom for a country is to serve the country and help fellow citizens equally.

It was only me in the start, later my childhood friend Neeti Goel, and then my entire charter accountant team along with their friends came on board. It was so overwhelming to see that it wasn’t only me and my friends but several others who gradually later joined with me to play their part in helping the distressed people, he told when asked about his team to the media.

In such an unprecedented time when governments fail to bring out solutions to important issues faced by lakhs of people across the nation, individuals such as Sonu Sood and many others whom we have failed to mention, stood up for the humanity and took pain to work and help people in distress.

These are the situation which calls out united efforts by every able citizen of the country and contribute to the cause. Sonu Sood, a man who believes to bring a change, has shown that even a small effort by every citizen can bring out an enormous change to the problems. That, the government alone is not responsible to improve the situation but, we all together are.