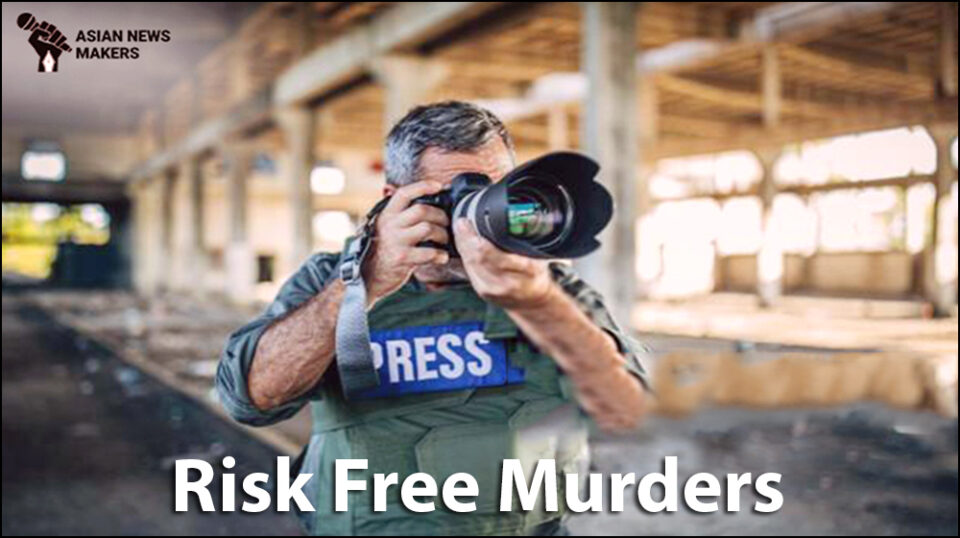 “There is no single explanation as to why journalists are targeted, but one of the principal causes has always been wars and armed conflicts where journalists who report on them are exposed to injury, kidnapping or worse,” says the International Federation of Journalists www.ifj.org in its latest report.

The report further says during last 30 years, as many as 138 journalists were eliminated in Pakistan, and 116 of them were killed in India and 110 in Russia.

The report says 2658 scribes have been eliminated across the globe since 1990. The IFJ says, “In no less than 90 percent of journalist murders worldwide, there has been little or no prosecution whatsoever. In two-thirds of the cases the killers were not identified at all and probably never will be”.

In this context, the report points out that “….it is almost virtually risk-free to kill a journalist – (and) murder has become the “easiest and cheapest way of silencing troublesome journalists”.

The report says in recent years a novel threat to journalists has emerged with the involvement of ‘terrorist organisations’.

“The untold story, however, is the risk to local journalists as most of the murdered are local beat reporters whose names do not resonate in the media. In fact, nearly 75 percent of journalists killed around the world did not step on a landmine, or get shot in crossfire, or even die in a suicide bombing attack. They were instead murdered outright….,” the report says.

The report clarified that in Afghanistan the casualty numbers 93 among journalists only reflect the aftermath of the US invasion in 2001. The link between deadly conflicts and a spike in the murders of journalists was also apparent in the civil war in Algeria which kicked off in 1993 and ended in 1996.

“In its 2020 ranking per country, Mexico tops the list for the fourth time in five years with 13 killings, followed by Pakistan (5) while Afghanistan, India, Iraq and Nigeria recorded 3 killings each,” the report says.

The study also found many more cases of journalists who were detained for short periods of time before being Released without charges, underscoring the fact that their detention had nothing to do with law-breaking but just sheer abuse of power to escape scrutiny for their actions in public office.

The other finding from the study concerns the recurrent allegation of membership of – or support for- groups which are behind the events which journalists cover. This is the case in Turkey, where scores of journalists have been detained after the failed attempted coup of July 2016 on allegations that they supported the coup.

Civil unrest and elections-related protests have also led to massive arrests of journalists and other media professionals.

Reporting on the handling of crisis situations, like the outbreak of Covid-19, has also led to the arrest and detention of journalists in some countries. In one tragic case, a veteran Egyptian journalist, who was detained on this spurious charge, contracted the virus while in custody and died there.

In many cases, the IFJ’s study found that numerous journalists have not been charged with any crime for years after their arrest, even decades for some who are now feared dead.

Medicine for Corona: Hope in Offing By ANM Bureau