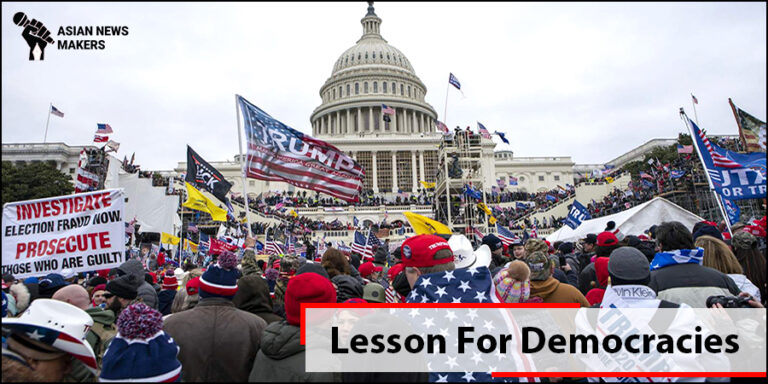 In the wake of Capitol Hill riotings it is indeed pertinent to relook at the viability of democratic politics. I would like to do so by examining at least three assertions on democracy in relation to the unprecedented and incredible happenings in USA.

One was made way back in 1967 by Theodor W. Ardono, a German philosopher of politics and culture. He had argued that the fascist tendencies survived in the liberal democratic orders of the capitalist West.

Second was of Shawn W. Rosenberg teaching in University of California, “Democracy Devouring Itself” in the face of the rise of the incompetent citizen and the appeal of the Right-Wing Populism.

The third, maintained by myself that democracy consists of an interplay between individuals, institutions and the processes.

Capitol Hill rioting: An attack on citadel of democracy

As the American Congress sat to certify the presidential election results which was not conceded yet by incumbent Donald Trump, his supporters stormed the Capitol. The motive was to disrupt the proceedings and deny Joe Biden to take over on 20 January. The worse was, marauding mob was incited among others by President Donald Trump himself.

In the violent assault on the Congress building, four persons lost their lives and many got injured. From the latest reports surfacing from the site of violence, a truck loaded with bombs and explosives has been found. The plan perhaps was to kill Nancy Pelosi, Speaker of the House of Representatives, and a formidable critic of Trump.

Following this unexpected and unprecedented violent incursion into the Congress premises, Pelosi has taken the extra-ordinary step of warning the Chairman of Joint Chiefs of Staff Mark Milley against letting the ‘unstable’ president access the launch codes and ordering a nuclear strike.

The graphic details and visuals of violence coming from Capitol and circulating across the world has shocked and surprised everyone attached to democratic politics. It goes without saying that Donald Trump, his comrades-in-arms, and dedicated band of supports shamed America; the stinging sights of lawmakers cowering for cover under the tables and behind the doors of Congress building, and heavily outnumbered security guards standing desperately with their pistols pointing out at the attackers, were hard to believe.

The ‘citadel of democracy’ seemed to be crumbling. Admittedly, America had witnessed similar or worse violence during the civil war in mid-19th century, about a century and a half ago. Nonetheless, repeat of such scenes in the 21st -century America is too bitter to swallow.

How America stood together during Capitol Hill incident

Thanks to the strength and resilience of the democratic institutions and individuals in US, there was an overwhelming reaction to Trump’s attempted coup. Pelosi wrote to the chairman of Joint Chiefs, “we must do everything that we can to protect the American people from his (Trump’s) unbalanced assault on our democracy and the country”.

The former Republican president George W. Bush demurred, “I watched it in dismay and disbelief”. Other prominent Republicans Mitt Romney and Ted Cruz have come out openly against Trump demanding his immediate removal etc.

Trump’s own Vice-President Mike Pence refused to buckle under Trump’s pressure nudging him to fudge the election results, “Come on Mike, it is time to show extreme courage”. The twitter blocked Trump’s account and the FB removed him from its platform

Arguably, America quickly and effectively neutralized its ‘maverick and malignant’ president, but the cracks he has caused in his own party and the country will take long to fill as the wounds take time to heal. What is, however, is more alarming is the implication of this epiphanic episode on democracies across the world.

People wonder if this could happen in the ‘greatest democracy’ of the world, it can happen anywhere, and if democracy is too fragile to survive. One quick explanation to assuage the worries of democracy lovers is the odd and unique personality of Donald Trump, one of his kind.

An editorial in New York times portrayed him thus, “Trump was a malignant narcissist in person, a fraudster in business, a bully in relationship, and demagogue in politics”. Agreed, but one cannot escape the fact of democratic politics which is, Trump was elected by the Americans. What does it speak of the cognitive capacities and political understanding of the Americans who elected him? This is the contention of Rosenberg about the voting citizens who are supposed to be the custodians of democracy.

I would like to go back to my initial three assertions; the first, Theodor’s thesis that Fascist uprisings are not exceptional to liberal democracies but are internal and structural signs of its failure.

Theodore argues further that authoritarianism was never really defeated, resides in everyday facets of both social and political structures, and personal conduct, must always be combatted anew. He is right as there are political forces and parties in so-called mature democracies representing such xenophobic and authoritarian tendencies: Tea Party and Proud Boys in US, let alone the banned Ku Klux Klan, Swedish Democrats in Sweden, Northern League in Italy, National Rally in France, Freedom and Justice Party in Poland, Fidesz in Hungary and so on.

While Theodor blames the structures, Rosenberg focuses on the citizens. He pontificates, “democracy seems poised to devour itself” as it lacks the citizenry with abilities to participate in public sphere and operate in its institutions and understand its culture. He argues that the elements of modernity like globalization, science and technology have ironically divested the elite of their control of the public sphere, mainly the communication and the messaging, making the citizens vulnerable to propaganda and falsehood circulating freely in the New media.

Is Right Wing Populism to blame for Capitol Hill incident?

The Right-Wing Populism (RWP) has grabbled this space by offering the citizens an authoritative definition of the ‘real world’ and an authoritative direction of how must they act to secure their place in that world.

Rosenberg is making us wary of the phenomenal growth of RWP across the world- America, Britain in Brexit, Israel, India, Brazil. Russia, Hungary, and Poland etc. One could attribute the 6 January incident to the politics of RWP that had overtaken USA.

I would combine Theodor and Rosenberg and add one more element, that is democracy as the interfacing of Individuals (citizens) institutions (structures) and Processes (innovations). America has strong structures but has faltered in innovating processes and educating its citizens.

Many political observers add India to the list of politics of RWP, which should be the topic for another full article. Suffice it to say that Prime Minister Modi has reacted timely and correctly to the crisis in Capitol.  Narendra Modi, who had somewhat endorsed the candidature of Trump, which was politically and diplomatically incorrect, condemned the protests, “distressed to see news about rioting and violence in Washington DC. Orderly and peaceful transfer of power must continue. The democratic process cannot be allowed to be subverted through unlawful protests”.

But in my thesis of the three forces shaping democracy, in India, we have innovative processes, individuals tamed by the Constitution barring the aberration in 1975, but our institutions have become brittle in recent times. That is a nagging worry. Also, the citizens often fall prey to RWP rhetoric. Indian democracy remains intact owing to her history of freedom movement, and her unique social and cultural fabric; the social pluralism is co-terminus with political democracy. The freedom movement that bred the Indian political culture was an all-class, non-violent liberation struggle unparalleled in the political history of the world.

To sum up with a note of optimism, that we must understand democracy is not a full-fledged reality even in America, it is a project in constant evolution, an ideal that is yet to be realized, and as long as it betrays its promise, it will continue to generate movements of resentment and even reckless rebellion. So those who love and defend democracy must confront the persistent inequalities of- income, race, caste, colour, gender- or of any kind, that breed resentment, often undemocratic and d violent, and prevent democracy from becoming what it claims to be.

At the same time, we must undertake massive educational initiatives for citizens to create informed individuals and visionary leadership, felicitous processes which will contribute to building robust institutions. The citizens’ political education could be premised on the vulnerabilities of the citizens exploited by the RWP politics- the public hunger for meaning, security and direction. These are the challenges that confront democracies all over the world after the ugly and unsavory display of distortion of the democratic process in the United States.