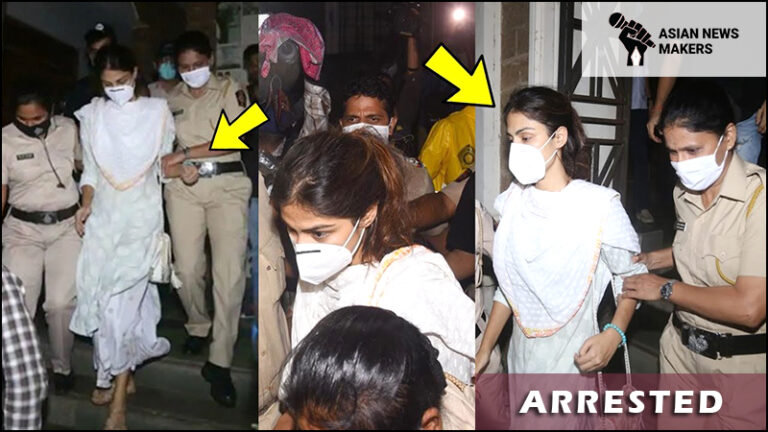 Arrest of Rhea Chakraborty seems to have complicated the investigations of death of actor Sushant Singh Rajput more than it being a step towards  some conclusion.

Mumbai Police has had a shoddy track record vis-à-vis functioning under political influence, with the arrest of Rhea NCB too now can be viewed through the similar lens.

Possession of  around 60 gram banned drug by Rhea as claimed by the agency is no crime under the law, it is important to watch what are the other admissible and valid ground for the arrest of the actor by NCB.

It is important to note that just a day before her arrest by NCB Rhea had filed an FIR in a Mumbai Police station against SSR’s sister alleging her for suggesting brother Sushant an unprescribed drug.

FIR with Mumbai police at the time when the case is being handled by the national investigating agencies like Central Bureau of Investigations (CBI), Enforcement Directorate (ED)and NCB puts the intention of Mumbai police once again under scanner.

Is the Mumbai police trying to shield Rhea by giving her ‘VVIP’ treatment while national investigating agencies are under pressures from their own masters will be something to watch for in the future.

‘Rhea Chakraborty episode’ is not the first phase that marks the dawning of an alleged corrupt era in Mumbai police. The reason for such overgenerous observation is Mumbai police itself. There have been other VVIPs also.

Mumbai Police and its political masters

When he was asked by journos, “Did the Mumbai police not know about the drug menace angle”, Maharashtra Home Minister, Anil Deshmukh, preferred to keep silence with folded hands and moved ahead.

There is one thing common between Maharashtra of 2003 and 2020. Coincidentally on both the occasions, NCP has Home Department and both the Home Ministers – Chhagan Bhujbal and Anil Deshmukh – are Sharad Pawar acolytes.

Anil Deshmukh had tweeted sometime back to say – “I condemn the demand for the Sushant Singh Rajput case to be handed to the CBI. The case is now being politicised for political gains. Maharashtra Police is inquiring into the case professionally and are competent in digging out the truth, leaving no stone unturned”.

These are not to suggest that Mr Pawar has been singularly influencing Mumbai police with regard to their alleged mishandling of the mysterious death of actor Sushant Singh Rajput.

Who Will Police the Police

Time and again, one has heard the whispering, “Who will police the police”. It is also true, the police always appear to be in an adversarial relationship with the common citizens and especially the media.

Both have thank-less nature of jobs and both need each other too. Any journalist who has covered a city like Mumbai, the communal mayhem or insurgency will back this statement.

The Mumbai police is in the news these days. Now that arrest process has begun in the much talked about Sushant Singh Rajput murder case involving drugs; the whispering about the efficacy and more importantly, the sincerity, of the ‘Scotland Yard of East’ has only gained momentum.

The sagging image of police is of course not confined to one state or region. Nor the credibility of Mumbai police has taken a hit for the first time.

The past is a mirror. Hence I go back to the 2003-04 days when the infamous Telgi stamp paper scam was being investigated by a Special Investigation Team (SIT) led by senior cop S.S Puri.

Yes, here I would recollect the ‘questionable role’ of inspector Dilip Kamath, who had gone to the length of serving tea and snacks to none other than the prime accused, Abdul Karim Telgi, in a Colaba apartment when the SIT team raided it.

The Karnataka police had already alerted about Telgi’s role and Anti-Corruption Bureau of Maharashtra was already on the job.

Though Kamat was acquitted in 2016, the alleged episode certainly could not find sympathizers for the Crime Branch of Mumbai police during the murky days of 2003-04.

Thus, the important take away is Rhea Chakraborty is not the first ‘prime suspect’ who got a VVIP treatment under the sun.

Shoddy Past of Mumbai Police

DCP Pradeep Sawant of Crime Branch too was arrested. It is, however, worth pointing out that Pradeep Sawant was suspended in 2004 for his alleged involvement in the stamp paper scam, but was reinstated in 2009 after he was found innocent. Sawant was later posted as DCP Anti-Terrorist Squad, Mumbai.

But the big embarrassment for the so called ‘national’ Scotland Yard was the arrest of a former Joint Commissioner of Police (Crime) Shridhar Wagal. The day Wagal was held on the charge of connivance and taking bribes, he was Additional Director General of Police in the Maharashtra’s DGP’s office.

This journalist was in Mumbai those days discharging the role of a News Coordinator at the city’s well known newspaper ‘Free Press Journal’.

It goes without saying, the arrest of a bright academic career background IPS officer of 1976 batch, Wagal, who at times preferred keeping shirt buttons undone, had sent a shock wave among the men in Khaki.

Our news team was also as much surprised as the citizens of Mumbai or satellite towns Thane and Kalyan.

In fact, that was just the tip of the iceberg as regards the scam and taking the police morale at all time low ebb.

But yet again, Wagal too was reinstated after the Supreme Court in 2007 said there was no case against him.

Similarly, in Sharma’s case too, in a setback to the prosecution in the multi-crore fake stamp scam, the Special MCOCA Court in Pune had discharged him along with ex-DCP Pradeep Sawant and Inspector Vashisht Andhalefor ‘lack of evidence’.

The high profile case relates to unearthing of ‘Telgi’s racket’ and seizure of fake stamp papers worth over Rs 3,068 crore.

Pune’s historic Yerwada jail was established during the colonial period in 1871. In 2004 and 2005; in the high-security precincts of the prison stayed notorious criminals like Abdul Karim Telgi and various gangsters barely a few metres away from the ‘arrested cops’.

As many as six Mumbai police personnel including two IPS officials were arrested in the case.

Are we asking for a moon?

There is definitely a nationwide clamour for reforms in police administration. The National Human Rights Commission (NHRC) has spoken about certain limitations in today’s law. All these bring us back to the task emphasizing once again that the archaic Police Act of 1861, should be replaced at the earliest.

The Supreme Court in a landmark verdict in 2006 in Prakash Singh & Others and Union of India took serious note of the issue of police violence and impunity and directed the states to establish Police Complaint Authorities (PCA).

The judgment also made crucial points on the separation of law and order functions from the investigation functions for the police.

From several quarters, one key recommendation has been that the chief of state police force – the DGP should be selected from a panel of three senior IPS officers and the panel itself should be prepared  by the Chairman of UPSC.

It has been also suggested time and again that the police chief (DGP) should have a fixed tenure. At present he or she is at the mercy of the Chief Minister and state Home Minister.

The faux pas in the existing system came to light in 2003 in Mumbai itself when over appointment of DGP in Maharashtra, both the then Chief Minister Sushilkumar Shinde and Deputy Chief Minister Chhagan Bhujbal resorted to verbal fracas before the media on camera.

In December 2003, Bhujbal also had to resign in the thick of the row over stamp paper scam. But for records, it was given out that he was bowing out of office owing moral responsibility for the attack on a TV channels office by NCP workers.

In 2020, days before the Supreme Court had given its nod for the CBI probe into the death of Sushant Singh Rajput, NCP

Stalwart Sharad Pawar had said – “I have one hundred per cent trust in the Maharashtra and Mumbai Police”.

But to his embarrassment his grandnephew Parth Pawar had made a demand for the investigation by the premier investigating agency.

With new development happening each day in #ssrcase and varied political interest seemingly siding different sides it is something of the concerns how #justiceforsushant is delivered and delivered on time.