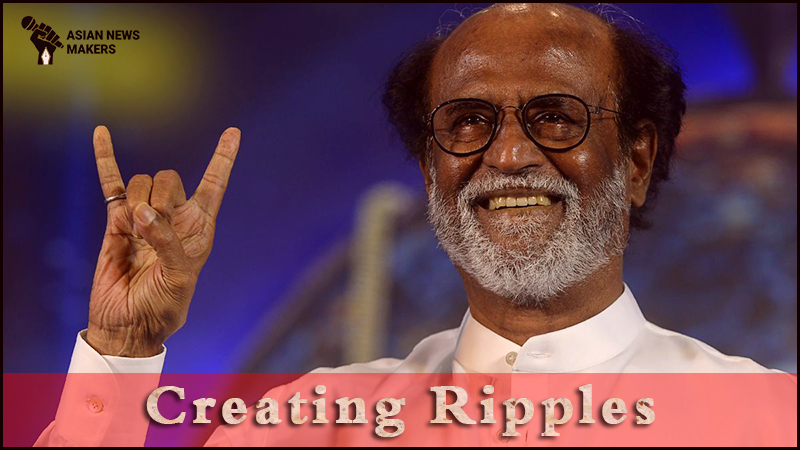 Enthusiastic admirers of superstar Rajinikanth are in more than jubilant mood. While BJP cheers but Hindutva may not be Rajni’s Plank.

‘Ronald Regan of Tamil Nadu is here’ remarked one of them in the social media close on the heels the matinee idol of Tollywood announced his decision on December 3 to launch his party. To put it mildly, the basket is full. Tamil Nadu polity is certainly gearing up for the mother of all elections.

A source in the Communist Party of India says, Tamil Nadu is heading towards an ideological war – between Hindutva laced with Nationalism on one side versus others. Corruption will be another issue more so because Rajinikanth is a new entrant.

Both the DMK and the AIADMK have more often hit headlines for corruption. Likes of sitting MPs A Raja and M Kanimozhi, powerful DMK leaders, were behind bars once and later acquitted. The faceless voter of Tamil Nadu may perhaps prefer a party that believes firmly about ‘clean politics’ and here comes the relevance of Rajinikanth and his yet to be floated new party.

However, it goes without saying that the political structures of both DMK and AIADMK are so strong that after legendary M G Ramachandran and Jayalalitha, no cinestar has been able to make big in the political battles.

“Vijaykanth was also a great cinema actor then Shivaji Ganesan was hero of the cinema world for many years, but he also could not do….I think, the AIADMK and DMK structures are so well set that you have to have a very strong organisation to be able to make a dent and convert your popularity into votes”, BJP leader Dr Subramanian Swamy told a television channel.

The DMK, which presumed it could be an easy contest in 2021 only a few months back, is now perhaps getting little perplexed. For long it was thought that Tamil Nadu politics is all about a ‘Dravidian hegemony’ one way or another. But lately, one hot issue in debates in Tamil Nadu politics is a mixed package of the Tamil identity, Dravidian issues, the Bharatiyata or Nationalism and some elements of ‘spiritual politics’ laced with the Hindutva ideologies.

Dr Subramanian Swamy had said in 2019 – “Tamil Nadu is ready for Hindutva driven politics and Tamilians are fed up with Dravidian bogus history driven and CBI fear driven politics. ….Needs an overhaul to fill the vacuum”.

But on Dec 3, shortly after the mega announcement was made by Rajinikanth; Dr Swamy was more candid- “Rajinikanth has been a chela (follower) of spiritual leader Dayanand Saraswati and used to visit him at Rishikesh. That way, he is not anti-Hindutva but that may not be his main plank”.

The remarks made to a television news channel have added its own significance as there is widespread speculation on Rajinikanth’s future moves. There will be yet another round of complexity as BJP has already entered into an alliance with the AIADMK.

Shortly after Rajinikanth’s announcement, cinestar-turned-politician Khusbu Sundar, who recently joined BJP, said, “Everyone is welcome to join us”.

Khusbu also advised her erstwhile party colleague Karti Chidambaram in Congress not to worry much about whether Rajinikanth’s entry into politics will affect BJP’s alliance with the AIADMK.

For his part, Karti Chidambaram had raised a vital and valid question, “Is the alliance between @AIADMKOfficial & @BJP4India still on after this announcement? Will @BJP4TamilNadu clarify? Asks Karti Chidambaram, Congress MP after Rajinikanth announced formation of a new party.

BJP’s alliance with the AIADMK is already on shaky ground as erstwhile close associate of Jayalalitha, V K Sasikala may not approve the deal. There is on-ground analysis too that suggests that things could be really complex.

“There is now a possibility of contest between the ‘nationalist plus Hindutva vote bank’ represented by BJP and AIADMK on one hand and on the other hand, the Dravidian plus votes including traditional Left supporters and a section of Tamil support base which feels LTTE was wronged in Sri Lanka,” says a senior politician.

In the last six months or so, several district and local leaders have shown keenness to come closer to the BJP though the general belief is that DMK will come to power.

Tamil Nadu politics has been over the years grounded on different yardsticks. Politics in the state has been linked to freebies. Another trend has been changing voters’ favourites every five years. All eyes are on 2021 assembly elections.

Detox and Stay Fit During Pandemic By Dt Sonika Mathur