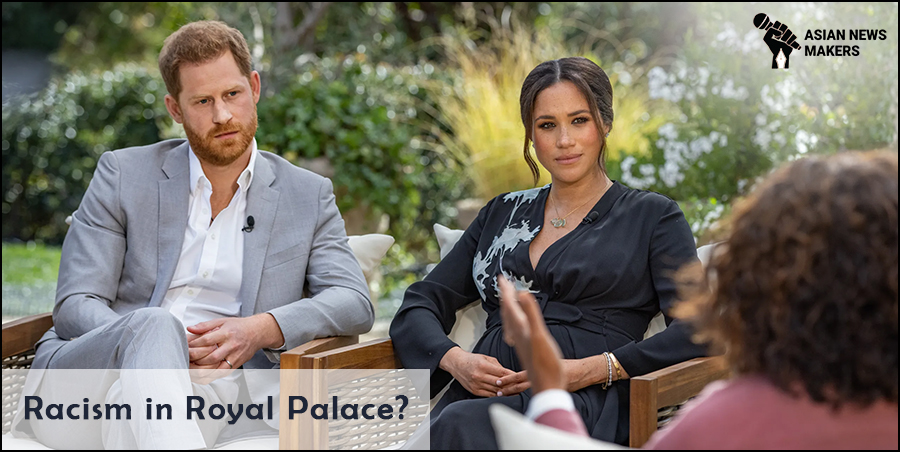 Meghan Markle and Prince Harry’s interview has not just triggered the racism row but brings forth the hypocrisy of how British have ruled the world. ‘Much awaited’ Buckingham Palace response which came after ‘crises meetings involving senior royals’ said that it takes race issues “very seriously”, that “recollections may vary” and the matter would be addressed privately but fell short of any categorical statement on issue of racism. The interview however has spilled the beans open on how the response on racism issue is a divided house.

Even before Prince Harry and Meghan Markle’s interview with Oprah Winfrey aired, much hype was created on social media and various publications. Viewers expected something sensational and they got it. ‘Racism? Within Buckingham Palace?’ Really? Unbelievable!

Allegation of racism is a big thing today and not only no one want to be shown siding by it, categorical refutal is demanded to put the records straight from the high-governing institutions and their leaders.

While the White House lost no time in pointing out that Harry and Meghan’s interview took “courage”, the Royal Palace, in a typical ‘British royalty way’ chose to handle matter “privately”, the interview definitely is proving to be a big statement against existing racism in British society, besides ‘brushing-under the carpet’ attitude of “suicidal thoughts” as pointed by Meghan.

Piers Morgan, the controversial host of ITV’s popular Good Morning Britain Show who had to lose his job after row over Meghan remark represents how it is a long way to go in changing how even the advanced societies feel and react on ‘racism’ and ‘mental issues’.

It is therefore important to acknowledge ‘racism’ as very much a deep-rooted discrimination rather just as a fashionable and voguish mention of the word in social circles, which make ears pop out. And the minute you learn who the racist is, the polished amongst us few, will berate them privately as well as publicly and boycott them, without even looking inside their own souls and minds, about their own ideology. Practice what you preach is not in vogue these days. Those phrases died with the coiners.

Not in any way doubting Meghan’s feelings or her assertions, yet I would have been shocked had she ‘not’ experienced racism of some sort in a very British traditional household. Getting married into a monarchy, which till recently ruled half the world, this was not unexpected. Residents of the palace or even those remotely associated with the Kings and the Queen, may still be living in their age-old ideology of oligarchies and looking down on those downtrodden and not-so-white human beings.

Responding to online vacancy advertisements, researchers sent out similar resumes with different names, including British sounding names and other ethnic communities recognisably African, Muslim, Pakistani or European names. The study found that for every ten positive replies for British names, the minority sounding names got only six. UK’s Guardian newspaper too found that the ratio of British to other ethnic responses was 10 to 8, in an experiment they conducted in 2018.

In their racial beliefs survey, researchers asked the interviewees a few questions. They concluded that 18% of the responded agreed that certain racial groups were born less intelligent than their white counterparts. 44% of the population surveyed agreed that some racial groups worked harder than others.

In the article on the issue of racism in The Conversation, the writer opined that, “Perhaps the difference between these two percentages is due to political correctness. The claim that there are innate group differences in intelligence would widely be recognised as a racist statement, whereas innate differences in work ethic may not have the same blatant connotations. But whether we go for the lower or the higher figure, on this evidence a substantial minority of the British public subscribe to some form of racist belief.”

The racist repercussions of British imperialism in India, are still felt even after more than seven decades of their rule. How the British ruled by dividing the Indian societies on religious and caste lines to suit their governance, is the reflection of deep-rooted British attitude towards certain ‘low castes and coloured skins’. In order to rule a vast country like India British exploited and flared up ripples among a large Indian population which followed social hierarchies on the bases of caste.

India, till date reels through the side-effects of British rule in India. Years later India is still engaged with Pakistan on order issues. Whether it’s the Kashmir or the Khalistan or the current issues of CAA which bog India, have roots in British imperialism which was based on ‘rule by dividing’. The effect of divisions on the bases of caste and religion were so deeply rooted by British government that the ripple effects are evident in current political scenario which is witnessed in India and may take centuries and generations to roll back to the pre-British historic times.

How Racism needs a course correction in all the western societies

Not only in India, the racist beliefs have travelled far and wide and the remnants are still to be completely eradicated. Living in British Columbia, a province of Canada, I have experienced those beliefs first hand. Whether it is a private workplace or associated with any level of government, I have stumbled on these beliefs far too many times to mention.

Not once, many times when a promotion was due, I was told, “Be happy that you have a job. There are many out there, who would gladly trade places with you.” In a layman’s language, it meant, take it or leave it or suck it up. And I did – sucked up in some places, and left the other after making a big noise. During Black History month celebrated in February, I sent my story to a couple of white publications and none agreed to publish it. Was it because it was Black history month and not South Asian month! Anyway, this story is not about me but the royals. And if the royals are treated so, I should call myself a Queen!

Does the Harry Megan Interview show the way forward for ‘racism’?

That Prince Harry saw racism through his wife Megan Markel’s eyes and trusted her enough to revolt against the royals, is nothing but commendable. Most husbands from similar traditional households, would either ask their wives to suck it up as they cannot change their family or would not believe their wife’s grievances, no matter how depressed or suicidal she would be.

Prince Harry, after watching his mother Lady Diana go through similar experiences, obviously has learnt his lesson in his younger days. Yet, it would be difficult to believe that Lady Diana, too was a target of racism within the Palace. After all, she did have some kind of royal blood flowing in her veins. What is certain, however, is that her husband was not motivated enough to revolt against his family or did not love Diana enough, to quit being a Prince. Or because he had a back-up in Camilla?

We can shout at the top of our voices that there is no racism or eradicate the disease called racism, yet it is all pervasive in society to see, feel and hear. To talk about the colour of an unborn child, whether he belongs to a royal family or not, can only be termed abhorrent and a statement originating from a sick mind.

Though Prince Harry denied that it were his grandparents who had brought up the colour issue and he has not named anyone, yet it can only be gauged that it has to be someone close enough for the rebellious couple to organize a mutiny. And then come on television to claim so is nothing but tenacious. Bravo Harry!

Dr Neelam Batra-Verma is the author of 1971: A War Story.