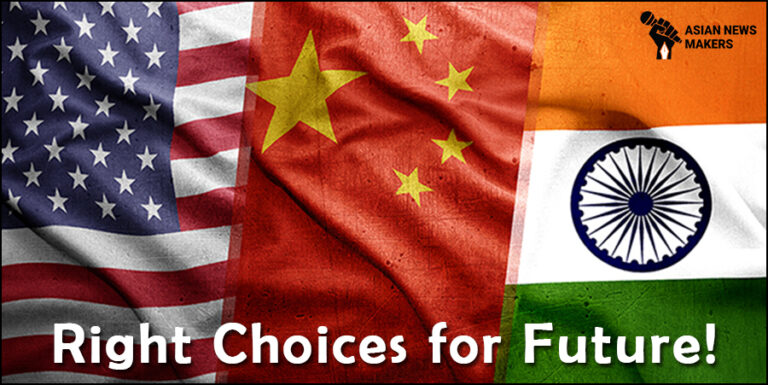 The Quad summit on 12th March 2021 deepened the alliance of four members as it rattled China, the main adversary. As an illustration of the growing partnership, it was resolved that the production of Covid-19 vaccine be augmented and supplied to the countries around India-Pacific.

The idea or refrain is, the vaccine will be manufactured in India with American technology, Japanese funds and distributed with Australian networks. The other notable accomplishment of the summit is a joint declaration by the heads of governments and a jointly authored op-ed article in the American daily. Prior to the summit, each country used to issue their respective communiqué.

While New Delhi is cementing its partnership with the Quad members, mainly United States, questions are being raised about India riding two horses at the same time. The horses in question are the Quad and the BRICS.

The critics have begun to dub such act as strategic confusion, not autonomy. Global Times, the Chinese newspaper known for making controversial comments on international issues, said that it saw “a contradiction in India’s participation in both the forums”. It also suggested that Quad constitutes a clique in international politics and is going nowhere.

Be that as it may, one tends to believe that India’s membership of Quad and BRICS does indicate a fair degree of strategic confusion and dichotomy. The apologists of India’s foreign policy will argue that New Delhi is maintaining a fine balance in a polarised world. The participation in Quad assures a free and stable India-Pacific. Membership of BRICS will lend some diplomatic value as it provides a channel of communication between Delhi and Beijing and a gateway to countries like Brazil, Russia and South Africa. They take a similar position on Shanghai Cooperation Organisation (SCO). But has the so-called balancing exercise yielded any material dividend for India. That is the point of inquiry in this piece.

The concept of ‘strategic autonomy’, is not a new one. This has bugged the foreign policy makers from the beginning. Recall, Nehru building a non-aligned block along with Josip Broz, having the real moniker as Tito of former Yugoslavia, Sukarno and Gamal Abdel Nasser of Egypt. Pt Nehru apparently did so to stay away from both the super powers during the Cold War. But he could not maintain the strategy of non-alignment for long, in 1956, he criticised the Anglo-French attack on Suez Canal while, the same year, he kept quiet on the Soviet invasion of Hungary. Again in 1971, as India intervened in Bangladesh crisis and the United States threatened by sending its 7th Fleet, Indira Gandhi, the then Prime Minister signed a peace and friendship treaty with the Soviet Union compromising the non-aligned status of the country.

Worse, India had to bear a heavy cost for its defence. Since it was part of no alliance it had to carry its own cross on matters of security. On the dispute in Kashmir, India and Pakistan plunged into a virtual arms race. The arms exporting countries took advantage of the conflict and began to sell arms to both India and Pakistan. One remembers the delegations headed by either the Prime Minister or President consisted mainly of arms manufacturers. It was a routine for visiting head to touch New Delhi and Islamabad in the same itinerary and conclude arms deals.

A similar approach of so-called strategic autonomy continues till date irrespective of the political party at the helm in New Delhi. India has been oscillating between the BRICS and Quad, between the East and the West and now between Eurasia and India-Pacific.

Global Times referred earlier warnings that New Delhi will fall eventually between two tools unless it stands firmly on one of them. Beijing perceives New Delhi’s balancing tactic as blackmailing China. The Americans might have a similar conjecture although they would need New Delhi as a counter-weight to Beijing.

Looking at the past, after the non-alignment, New Delhi perhaps wanted to create some space vis-a-vis the United States after the disintegration of Soviet Union. That is why it joined the BRICS.  Was it not an ill-conceived strategy?

The United States was engaged in disengaging Soviet Union from South Asia, mainly from Afghanistan. So it supported Pakistan as it considered Islamabad to be a frontline player against Soviet occupation of Afghanistan. New Delhi could have given a hand as Afghanistan too was a non-aligned, independent and a sovereign country. New Delhi was equivocal. It is now back to square one. It has to back American efforts in bringing peace and stability to the war-torn country. New Delhi’s clear position then would have saved it a lot of tension and costs in dealing with Pakistan. As China emerged as a big economic and technological power almost replacing former Soviet Union as the other super power.

In American’s foreign policy calculation, China became a threat to their hegemony in world politics. They began to soften their approach towards India, remember Bill Clinton questioning the legitimacy of accession of J&K to India during 1993-97. Much water has flown down river Ganges and Mississippi since. Clinton’s successors George W. Bush, Barack Obama and Donald Trump deepened the cooperation with India to make it one of the most strategic partners.

Even for India, China has emerged as a threat in terms of security, diplomacy, trade and so on. More seriously, Beijing has nudged and nurtured Pakistan to go after India. China’s belligerence and territorial aggrandisement has cost India heavily. The latest incursion in the Eastern Ladakh has been the worst of all where Indian soldiers had to lay their lives in defending our territory against Chinese expansionism. Somehow, to the surprise of many, Beijing agreed to disengage in the Eastern Ladakh area but mounted cyber attacks on India’s infrastructure. The spying activities by Chinese officials and companies is commonplace.

It is time India make its international alliances clear

Against such a backdrop in New Delhi’s relations with Beijing, and the major powers of democratic world coming closer, should India continue to equivocate on its alliance building. Is the choice not clear?  Neutrality, non-alignment is not an option in an inter-dependent world. Balancing is no more possible. It will impose heavy cost and credibility loss. It’s time to choose your tent.

On the one hand, there are countries adhering to democracy and human rights – US, Japan, Australia, and possibly Israel, South Korea, New Zealand, Canada and EU. On the other hand, there are repressive regimes like China, North Korea, Russia, Pakistan and perhaps Turkey. On the one hand, democracy and on the other, autocracy and dictatorship. Democratic world is extending a hand of friendship to the biggest democracy of the world, on the other, the autocrats and despots seek to curb India’s growth and influence. Where is the confusion? Is it not high time, New Delhi withdraws from BRICS and SCO.

A last word. BRICS and SCO are run largely by Beijing. How can India remain in these blocks when China conspires to encircle India and squeeze it, and worse, invades it territory. Is there any room for manoeuvre? Let New Delhi stop its self delusion.

(THE VIEWS EXPRESSED IN THE ARTICLE BELONG SOLELY TO THE AUTHOR AND DO NOT NECESSARILY REFLECT THE OPINION, BELIEFS AND VIEW POINT OF THE OWNERS OF ASIANNEWSMAKERS.COM)