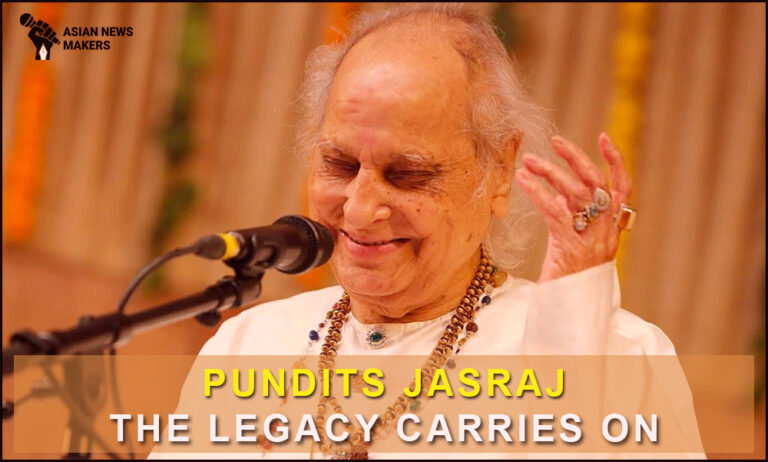 The legends never die. Pundits Jasraj, the doyen of Indian Classical Music shall continue to live through his legacy which remains eternal. Here we re-publish his interview as a small tribute to the great maestro.

Legends don’t need introductions.  Legends are sources of inspiration and have achieved what might need a few life-times. He is now 80 years old but has spent more than six decades trying to popularize classical singing all over the world. A few years back, he went city to city, village to village in India singing classical and devotional songs thus creating not only fan following but also disciples some of whom have been with him forever.

His status as an unparalleled living legend confirmed by a scholarship instituted by the University of Toronto in his name for deserving young Canadian students wishing to train in Indian music, has made history by being the first living Indian musician to be honored by a foreign university in this manner. Pandi Jasraj, the doyen of Indian classical vocal tradition held a jam-packed concert for music lovers of the city of Vancouver during his tour of North America, last month. His rich, soul-stirring, sonorous voice that traverses effortlessly across three-and-a-half octaves, left the audience spell bound. He has performed in Vancouver a number of times, starting first in the nineties. His first concert created so many fans following giving birth to Pandit Jasraj School of Music in Vancouver. The school is run by volunteers who have been taught by Pandit Jasraj himself and then in turn they run classes in their homes.

Like most of his concerts, Pt Jasraj’s concerts are a means of establishing a communion with God. His notes are suffused with spirituality and his concerts are known to cast magic spells that may last forever. No wonder, he has been bestowed with almost every musical award possible that one could write a whole journal on them. Not many Indian musicians have been felicitated and celebrated the way he has been both in India and out of the country. Out of India, he has been awarded by universities who have instituted awards in his name with an aim to seek a portion of musical divinity. In India he has received all the Padma awards ranging from Padma Vibhushan to Sangeet Natak Akademi Fellowship this year and still continues.

This reporter got the opportunity to meet the doyen on his recent visit to Vancouver and he talked about everything under the sun- his music, his life, his childhood, his fans, politics, the new generation etc but I could not get the answers to the questions I had thought I would ask him. Yet, looking back, he did but in his own devotional and musical style.

His childhood memories are mostly related to his father who passed away unexpectedly when he was just about four years old. Says Pandit Jasraj, “Somehow, he knew he would die young. He was not ailing and had everything going for him. He was a court musician in Kashmir, and we had just moved to Hyderabad and he was to take up his new position in the Court of Hyderabad the next day. The same day, he had received a letter from one of my uncles whom he had wanted to meet but had not met in a long time. He went to bed that day telling my mother not to wake him. A little while later, she heard a noise from his room like someone who is taking a last breath. He died peacefully but I still remember the words of my mother who said “mujhe majdhar mein chod gaye” (You have left me mid-way)”

Till then, Jasraj, had just seven notes as his inheritance from his departed father, but with those he stepped out into the cold world of harsh realities. Today, those seven notes make up his rainbow… his bridge to a mystical realm of sound… that lies beyond the applause, the awards, the titles, the trophies, the honours…putting him in touch with the music of the infinite.

Being interested in music, Pandit Jasraj started learning from his uncles and his elder brother, Pandit Maniramji, and later from Maharaja Jaywant Singhji Waghela. “I was also greatly influenced by the voice of the famous ghazal singer, Begum Akhtar, whom I used to listen to, skipping school, at a small hotel that played her songs all day. She inspired me to learn vocal music.”

As a means of livelihood, Maniramji took Jasraj as an accompanying tabla player.  It was in 1937 that he gave his first performance on stage as a Tabla artist, says he, “At that time-table players were looked down upon as minor artists and I did not like that. I said I want to become a singer and started practicing 12-14 hours a day. “By 1945, he had renounced the Tabla and taken to classical singing full time.

During his journey as an artist and also to support his family, Pandit Jasraj worked at the radio station in Calcutta. He fondly remembered an incident in 1954 when despite being a rising star, people still did not recognize him. “I went to attend a concert of the great Kesarbai with tremendous enthusiasm. I had bought ten tickets worth twenty-five rupees. I had given away the tickets to the other nine who were to join me at the venue.

As luck would have it, I had misplaced my ticket, but was sure I would have no trouble gaining entry as a well-known radio artist. To my dismay I went not only unrecognised, I was humiliated and also denied entry. All my ardent even tearful pleas to the watchmen, the organisers, etc., went unheard. I even tried telling them who I was but to no avail. Finally, Mrs. Som Tiwari (Amma) and the great artist A. Kananji came to my rescue and took me inside. He consoled me saying, that a day would come when Kesarbai herself would hear my singing.”

He philosophises about that day in 1999 when he had just returned from a concert. “No sooner had I stepped in I heard a voice emanating from around me. It was as if the walls were singing… resounding with the one word “Hey Kanha”. I kept following it around the room, singing after the voice. Thus, the whole bandish in raga Shankara unfolded, leading me along…”He Kanha…Tum par beeti jo beeti, Hampar beeti so kahi na jai…Ham jani tum jaaye pachtaye, Phir bhi prabhu kahaaye, Ham to rank hoon na ban pai.

Through my music I try to reach out to God and now even my audience sways and enjoys the music. I think that my relationship with God does not need the rigour of ritual. I will always sing in praise of Him and my music is really my aradhana (devotion). Mai swaron se ishwar ko saadhne ki chesta karta hoon (I try to reach God through my music.)”

Talking about taking the music to the next generation, Pandit Jasraj is not worried and feels the desire to learn classical singing cannot be forced. Says Tripti Mukherjee, an upcoming artist who has been singing with Pandit Jasraj since 1976 and has never looked back, regrets the influence of Bollywood amongst today’s youth. “It is Bollywood influence everywhere. Regretfully, the next generation just does not have the right environment to take to classical singing. They learn what they see.” Panditji does not agree and is more complacent. Says he, “If someone really wants to learn, he or she will do so. There is no need to create an environment or influence people. Music is not something that can be perfected in a lifetime. With every life you start off from where you have left in your previous life. Once you have understood this, age is no more a barrier and death is not the end of your musical pilgrimage.”

Bollywood music today though become hit as soon as it is out, yet do not have a long life. Says he, “Today in Bollywood it is more commercialization and people want results fast. They want to earn and don’t care about quality or impact of the music they are creating. Their music is just for today and the songs are forgotten in a few days after. Yet we cannot deny that the impact of Bollywood and its music is here to stay. Once again, it is extension of our own culture. I have also not been immune to Bollywood and did sing a couple of songs a few years back.” Pandit Jasraj has many students and is ensuring the longevity of his genre. Amongst his flag-bearing disciples, Rattan Mohan Sharma, Sanjeev Abhyankar, Suman Ghosh, Tripti Mukherjee, Radharaman Kirtane, Pritam Bhattacharjee, Gargi Siddhant and Kala Ramnath are well-known exponents of the Mewati Gharana. Sadhana Sargam, a well-known Bollywood singer, is one of his disciples.

He married Madhura, daughter of V.Shantaram, the pioneer of Indian Cinema who has worked quietly behind the scenes to express herself through many a medium. She has wielded the pen to take up the daunting task of writing for her father his larger-than-life autobiography and directed a film based on his life’s work; ‘Portrait of a Pioneer’ exhibited in international documentary film festivals and the Indian Panorama. Madhura had also directed and produced the once critically acclaimed ballets, Geet Govind and Kaan Kahaani based on medieval Indian literature, art and music. She has conceptualised albums like Ashta Prahar and has several books and films to her credit. She also has made a documentary on her acclaimed husband.

He does not hold any grudges as none of his two children followed his path of taking classical singing forward. “But they are contributing to Indian music in their own way and I am proud of them. My daughter Durga is today the multi-faceted star of the small screen and promotes music and upcoming musicians. She was the co-host of the popular, Antakshari show on Zee TV and is now trying to find her place in the sun by organising thematic, multi-media and multiple artists classical concerts. She is also planning to reach out to music-lovers through her Indian Music Academy and slickly made classical music shows for the television. My son composes music for the film industry. I know they have the potential, but they are doing what they love doing.”

However, his granddaughter Eshwari Pandit, is making waves especially after she composed and sang a song for America’s first lady Michelle Obama during her visit to India in November.  The two-and-a half minute English composition called ‘Make a Difference’ was commissioned as the anthem for an NGO of the same name.

His collection of albums recorded for posterity, by prestigious national and international music companies is a virtual treasure trove for the music lover. As every maiden effort of an artist holds a special place in his life Pandit Jasraj’s very first album with HMV was an LP and contains a bandish composed by his father in raga Hamsadhwani and one of Pandit Jasrajji’s own earlier bandishes, in raga Shuddh Baradi. Today, Pandit Jasraj’s relentless pursuit, his passionate strife and his single-minded devotion to music have made him what he is……The bright sun of Indian music…the glorious Sangeet Martand.