Honey and Herbs for Good Health in…

Ayurveda Shows the Way for Health During…

Kalayatra 2020: A Journey Through The Epics 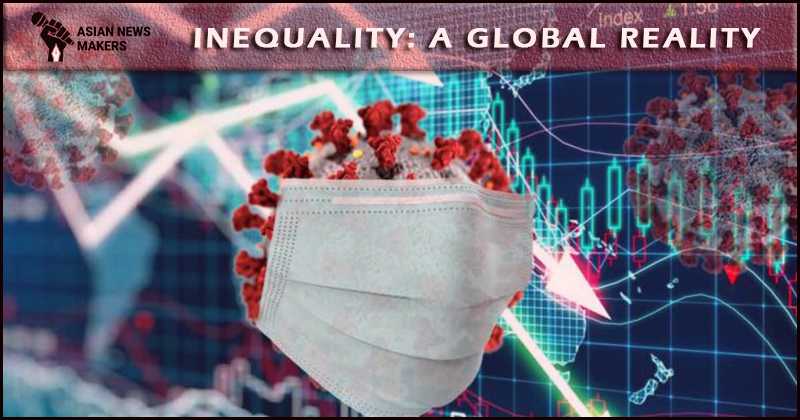 Saint-Augustine considered inequality to be the most serious threat to God’s world. Jean-Jacque Rousseau wrote extensively about the evils of inequality and how it could threaten the social contract.

Most recently, celebrated economists such as Thomas Piketty and alike, have provided a global perspective on rising Inequality and how it could impact the global economic, political and social fabric. It seems, inequality has made a comeback. But why now? Why has inequality become a subject du jour especially as the world goes through this pandemic?

Before the beginning of the economic crisis in 2008, the focus on inequality in the US and elsewhere within the modern capitalist economies, was subdued and under the political and economic radar.

This was because of the following narrative: as long as your income is growing – even if not nearly as quickly as financiers on Wall Street – it is not hard to foolishly convince yourself that you have the same shot at those riches as the millionaire next door.

Yet, we have seen over the years, through well-documented empirical evidence, how the wealth of the top one percent has grown globally as the wages and income of the rest of the populace has either remained stagnant or have not grown at all. This is not a political statement. These are hard core economic facts.

Through the vast army of highly priced and trained wealth managers, the wealthy have been able to create layers upon layers of tax shelters to use the same tax policy that has allowed multinationals to pay zero taxes while the average person continues to pay the state obligation. In that manner, inequality has lots to thank to tax policy framework. In many developing nations, elites don’t even pay taxes at all!

Inequality is a problem, politically and economically, precisely because of a secular stagnation. In that sense, the intensity and longevity of this ongoing great economic recession has brought the issue of inequality within the public forum with the renewed interest and analysis from all ideological corners. Post-Covid economic framework cannot be analysed or implemented without addressing the issue of inequality globally.

Does Capitalism Lead to Inequality?

Obviously, much of the analysis and commentary on inequality circles around the dogma of the left and right-less or more government intervention type of discussion that seriously undermines this serious social and economic issue. This ideologically obsessed analysis on inequality, within the print and electronic media, does not really offer any thought provoking discussion on this crucial matter of public and economic policy.

What is really needed is an open and strategic discourse that discusses this serious economic and social matter without any ideological bend that is capable of analyzing inequality from all possible venues. In a world of hyper partisanship, it is a tall order but the attempt must be made for the sake of a stable political and economic order across all modern capitalist economies and much of the rest of the world.

As an economic system; the rise, success and challenges of capitalism are one of the most sought after subjects of inquiry in the History of Economic Thought. According to universally acknowledged definition, capitalism is a system of economic and social relations marked by private property, the exchange of goods and services by free individuals, and the use of market mechanisms to control the production and distribution of those goods and services.

Some of its elements have existed in human societies for ages, but it was only in the seventeenth and eighteenth centuries, in parts of Europe and its offshoots in North America, that all elements came together in a more cohesive fashion. The triumph of the capitalist economic order unleashed a burst of innovation, technology and new ideas in many societies – regardless of their geographical destiny.

Yet, there is another side to this economic triumph. Capitalism’s intrinsic dynamism, also, produces insecurity among societies so its advance has always met with suspicion and resistance. Much of the political and economic history of capitalist societies revolved around the record attempts to ease or cushion those insecurities mostly through state interventions.

The ongoing recession from 2007-08 coupled with the present pandemic has compounded the tension between capitalism and democracy in modern economies as the growth rates have remained low and the rate of unemployment remains stubbornly high.

The rapid rise in technology, finance and international trade have caused the new waves and forms of insecurity for many capitalist economies where life has become increasingly unequal for not only the lower and working classes but also for the middle class as well.

It should not surprise anyone that the percentage share of worker’s wages as a proportion of total national income is sinking throughout the developed world. In the developing world, especially in China and India, the situation regarding inequality is also similar. Latin America is also on the same boat.

The African situation regarding inequality is well documented. The economic disaster due to pandemic lockdown has only enhanced already unequal wealth distribution and its consequences globally.

It goes like this: the right, in many modern capitalist societies, believe that less, not more regulation and let-the-market-decide-approach is the suitable way to tame inequality; while the left has sought to minimize it through government action, regardless of the costs. Neither approach is viable in the long run.

The contemporary capitalist societies need to accept that inequality and insecurity will continue to be the inevitable result of market operations and find ways to shield citizens from their consequences – while somehow still preserving the dynamism that produces capitalism’s vast economic and social benefits in the first place.

A growing recognition of increasing inequality within the industrial societies has naturally led to discussions of what can be done about rising inequality. What must be acknowledged right from the start that there is not one magic formula which can reduce inequality. If society is serious about reducing rising inequality, all options must be a part of a grand solution.

But the economic growth alone is not sufficient, either. What I am trying to suggest is that all policy options must be a part of an overall strategy to tame this social and economic malaise especially in the post-covid economic framework.

I once wrote: Inequality is the biggest social shame and danger. Unemployment is the other. A stable social order is only possible when the citizens are confident that they have access to equal economic opportunities to thrive and prosper. Rising inequality and decreasing upward mobility are threats to stable order. Within this context, the real challenge for a government policy in the advanced capitalist world and, also in the emerging economies, can be summarized in the following fashion-how to maintain a rate of economic dynamism that will provide increasing benefits for all while still managing to pay for the social welfare programs required to make citizens’ lives bearable under conditions of increasing inequality and insecurity.

There is no doubt that different countries will approach this challenge in different ways, since their priorities, traditions, size, and demographic and economic characteristics vary. But a useful starting point might be the rejection of both the politics of privilege and the politics of resentment and the adoption of a clear-eyed view of what capitalism actually involves, as opposed to the idealization of its worshipers and the demonization of its critics.

Sushant Singh Rajput Death: Many Firsts in the Case By Dr Neelam Batra-Verma