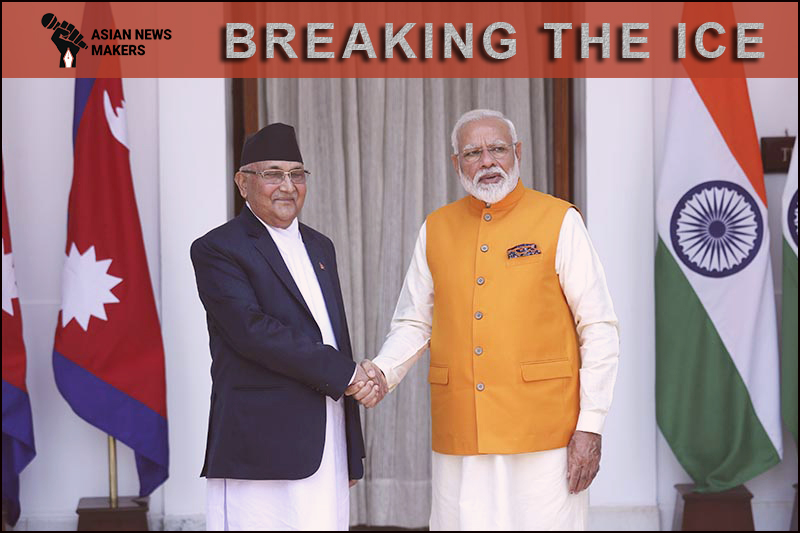 It was indeed a gesture to welcome when Nepal prime minister K P Oli reached out to the prime minister of India Narendra Modi, to congratulate him on the 74th independence-day on 15 August.

While it is customary and an often-exchanged friendly protocols amongst the friendly countries on independence and the republic days, what it is so special and so congratulatory about this telephone call by the Nepali PM this time?

These are those circumstances, amidst which the call has been made which makes this call so significant.

The two South Asian neighbours have been witnessing heated political exchanges on border issues for many months which had resulted in a virtual deadlock in the relationship between India and Nepal.

Prime minister of Nepal K P Oli called up Indian Prime minister Narendra Modi, thanking him for his independence-day speech when Modi reinstated Indian commitment for stronger ties with its neighbours. If it was a signal of some olive branch from India, Nepal lapped it up to make an opportunity of sorts to cooling down of heat between the two countries by using the occasion of 15 august.

Although PM Modi did not specify Nepal or any other neighbour in his speech, it appeared Nepal was waiting to catch even a smallest opportunity from Indian side to reach out even if it was a veiled indication. Nepal in a way reciprocated to the olive branch which India offered without specifying one.

Tension Between Nepal and India

The relationship between India and Nepal had hit all time low after a row over a political map issued by India which included disputed area of kalapani.

The latest spat over the border areas started off with the inauguration of a link road in early May by India. The road connects Darchula in district Pithiragarh of Uttarakhand to Lipulekh pass, which is a shorter route to Kailash mansarover Yatra.

War of words started in May when the two nations were gripped by the Covid 19 pandemic when defence minister of India inaugurated the link road.

Although the construction work of the road had been in progress since 2019 within very much the knowledge of Nepal and without any protest from it till so many months even when the Indian government had issued a map showcasing the areas in question as the part of Indian territory.

Not much objections were raised by the Nepal government then and during the construction period. Surprisingly the issue reached a boiling point only when the construction of the road was completed, inaugurated and thrown open for the public use. Rhetoric and sudden reactions of PM K P Oli and also of the defence minister of Nepal against the inauguration took everyone by surprise.

Nepal even issued its protest by calling Indian ambassador to Nepal by handing him over a letter of protest.

It is presumed that sudden outrage by PM Oli was to exploit the situation for his political benefits at his home ground. There had been raging opposition to the authority of PM Oli from within his party for many reasons, one being his closeness with neighbouring china.

Oli has been accused from his party men that he has allowed China to interfere in the internal affairs of Nepal to settle his political scores and achieve it political agenda. China was too happy to oblige, as for it, this was an opportunity-to expand in Nepal territory, extended beyond the humanitarian and infrastructural help it had been indulging in after the massive earthquake hit the Himalayan region few years back.

Political atmosphere was so much intensified against India in Nepal that people supported by the ruling party protested on roads against Indian misadventurism on the borders of Nepal.

Oli visibly used the situation for his political benefit and tried to assuage the emotions within his party as well as in the country to settle the dust of opposition for him by his colleagues as well as gather people’s sentiment in his favour.

Oli, who was accused by his party men to be playing in the hands of China was apparently trying to create an anti-India atmosphere in a time when China was trying to take over India on its eastern Ladakh borders. PM Oli suitably played to the Chinese gallery.

While China engaged with India on the borders of Ladakh PM Oli was comforting China by anti-India sentiments on the Nepal side of Indian border, thus building pressure on India.

This despite the fact that both India and Nepal insisted on clearing the air on border areas through diplomatic dialogue-Nepalese foreign minister even assured the Napalese parliament that the issue would be amicably settled through diplomatic channel.

PM Oli gave stronger statements blaming India for the rising corona cases in Himalayan nation. He even went on to insist that porous borders of Nepal with India were to be blamed for the corona crises in Nepal. He said “virus” from India is the reason for corona cases in Nepal.

While PM Oli struggled to retain his position within government and his own party and made it a point that anti India rhetoric is kept alive. This was when the parliament of Nepal unanimously agreed to issue and notify a “new map of Nepal” including the controversial area in its territory.

PM Oli was unstoppable even when many of his colleagues openly disagreed with his anti India tirade. This was also the time when the world anxiously watched the war like developments at Ladkah border between India and China.

Given such backdrop the telephonic diplomacy by PM Oli has much to derive from. PM Oli’s closeness with China is not a hidden secret. Nor it is hidden how China is trying to develop all together new dynamics in the South and Central Asian region.

While China-Nepal exploits may suit PM Oli for his own short-term benefits and also suit the Chinese geo-politics in the region, taking on India in the region may not be too good an idea in the long run for Nepal. PM Oli will have much to explain to his people if he appears to be responsible of spoiling age-old historic relationship with India.

Sentiments in favour of India within Nepal cannot be taken for granted for long plus it is not possible to exploit anti-India sentiments for political benefits given the shared historical and geographical relationships with India.

It is important to understand that Nepal might be acknowledging the fast-changing geo-political situations in the region. It has also to safeguard itself from the expantionism of China and therefore cannot afford to stay isolated by taking on India in the long run.

The other important reason can be to indicate China that it should not take the Nepalese friendly exchanges for granted in the region. By calling up PM Modi it could have been an effort by Nepal PM to play the politics of check and balancing in the region.