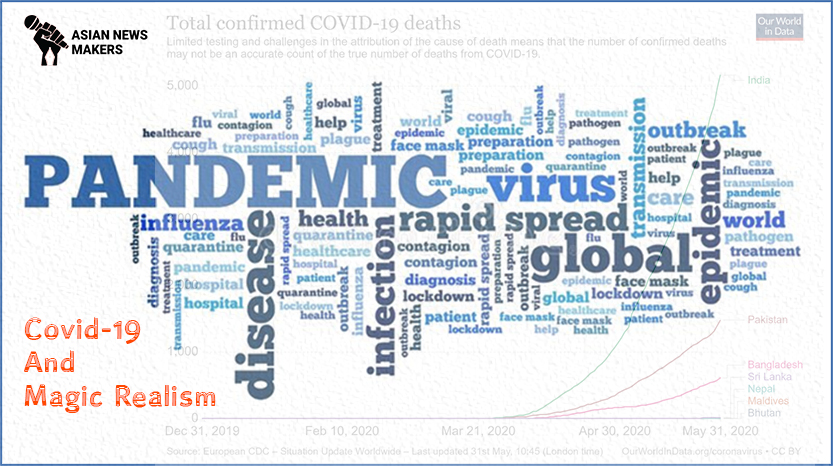 COVID-19 may seem no different, yet we can pledge to make a difference

COVID -19 has not just cracked the system at various levels globally and country-wise, it has also shown us where the system already lays cracked. In this respect, I forward three observations and follow each of these with corresponding arguments:

My First observation is that no major area of human life is left untouched, unharmed and un-eclipsed when epidemics strike. Flying on the wings of a dark magic, an epidemic may suddenly metamorphose into a pandemic. Sending humanity in a desperate scramble and search for medical counters to disease and death, pandemics, I argue, strike us as mirrors of our vulnerable realities.  Additionally, I propose that they may end up by exhibiting to us much more about our world, governments and societies than we would have been able to fathom in ‘normal’ times.

My Second observation concerns how COVID-19 has thrown many a government and social system on the defensive. For instance, all over the world conspiracy theories and blame-shifting is unfolding even more blatantly than the immediate aftermaths of the pandemic. Scapegoating and othering China alongside WHO is just one example. Many national institutions within countries are engaging is wars of words with each other as a direct fall out of such a negative attitude. Can there be any singular version of truth ever, – without mainstream versions, rhetoric, chaos and falsehoods? Zeroing in on India, we witness, how the pandemic  has become an excuse for portraying moral, political and socio-economic lapses with a juvenile spirit of  ‘who Dunnit’? Whether, how or when the origins would be found out and lapses remedied, is a conjectural and long term process. I argue that the rhetoric being created on the source, origin and spread of the Sars-COV- 2 in India will not be able to cover up for the lack of political-will  and actual policy in responding to the pandemic.

Finally and in the third place, I bring to recall a simple fact and observation: The world was always global. People, religions, philosophies, goods, ideas, civilizations, cultures and animals have always been on the move, shifting, migrating and settling down in accordance with their transforming relations vis-à-vis political geographies and nature. Nonetheless, the 21st Century model of globalization stands a class apart from previous strands of the phenomenon. It’s pushy, unjust, over -confident and brutally materialistic soliloquy symbolises processes of momentous political rhetoric and cover up. I argue that COVID-19 thwarts this cover up of unsustainable forms of globalisation and demystifies its unconvincing raison d’être. It pulls the chain and shines a red card on globalisation’s chugging amorality.

Sars-COV-2 as the Mirror of Reality

I wonder, if mirrors tell us any single reality? Or, do they let us onto many versions of the reality, if only we care to see?

Sars-COV-2, the virus that causes corona virus disease, is holding the magical mirror of reality on fast-forward models of globalistaion as well as under-prepared and power hungry governments and bureaucracies. Revealing the chinks in the armour of unsustainable economies and polities, it imparts us an opportunity to ponder.

By bringing many an assumed ‘given’ to a grinding halt, COVID-19 is doing what other pandemics have already done to world history in terms of death, destruction, distress and evolution.

Alongside putting the respective weaknesses and strengths to test within countries, the current pandemic turns a vicariously real focus on those very issues that the 21st Century rush for globalisation was busily pushing under its magic carpet.

These issues can be delineated as follows:

While the many unfolding realities around the pandemic keep up a momentum, comparisons of India’s COVID-19 situation with countries in Europe and North America have been taken up by the Indian government and others to highlight the apparent success of its pandemic strategy. The world is certainly global but each part’s responses to the pandemic are rooted in extreme as well as nuanced local realities. Just as regions differ in their economic structures and demography, climatic zones, sociopolitical realities and genetic make-up, so do their struggles and experiences with the pandemic. The spread of and responses to the pandemic has been very different in Europe and North America as compared to most other countries in the world, including India.

A comparison across South Asia may acquaint us with a better and closer analysis of the pandemic management in India. The efficacy, or otherwise, of India’s pandemic strategy (at the Central level) can be better assessed through a comparison with its South Asian neighbours. In addition to being similar in terms of economic structure and average incomes, South Asian countries share other similarities too. According to the World Bank, the five countries with the highest number of extreme poor are (in descending order): India, Nigeria, Democratic Republic of Congo, Ethiopia, and Bangladesh. Half of the world’s poor live in five countries, two out of which are in South Asia.

India’s neighbouring countries are also similar in other vital aspects that might account for differences in the pandemic’s spread – climate, geography, genetic make-up, age structure, BCG vaccination (The Wire: May 9, 2020) and so on.

In terms of the spread of COVID-19, Sri Lanka has the best position and India is the worst hit. India has consistently recorded the highest cumulative and daily case count. Its daily case count has kept increasing, and it has recorded by far the highest death rate among its neighbouring countries.

The rising death rates in India are a grim reality for national health care teams and related stakeholders, especially those who are frontline fighters of the pandemic,

Death rates are data for epidemiologists and governments who require such information for gauging the impact and trends of the pandemic. At the same time, for the ordinary citizens, deaths are an ‘actual reality’ that they face and an increase in these rates make them feel insecure. A decrease in deaths would imply a relief on many fronts. However, if State data on death is projected through inadequate testing rates (thus missing out on real numbers of COVID-19 deaths), the worries increase manifold at the level of the public. Hence there exists a panic as well as an erudite interest wherein all want to be able to access information and true data records to know the daily trends and policy measures on the pandemic.

Death rates depend upon a number of factors, which include reporting and transparency on data as well as actual rates of testing. Three graphical representations below show how India and its neighbors have so far fared on testing during the pandemic:

The data shows a daily testing record per 1000 people of the population. I have selected the three dates, i.e., March 31, 2020; April 30, 2020; May 30, 2020 so that a monthly spacing out and progressive record of testing can be compared among five South Asian countries. The three charts below have been generated and sourced from the website, ‘Our World in Data.org’.

In terms of testing, among all the South Asian countries, Maldives takes the lead:

As of May 31, 2020, there have been more than 6.08 million confirmed cases of corona virus of which 2.57 million have recovered  and a total of 370K have died since the outbreak of the global pandemic since January 2020(COVID-19 Database: WHO). The number of deaths in India during this time period are said to be 5,400 approximately, whereas total of 91819 have recovered out of the total of 191000 cases tested in the country.

When compared to other pandemics in world history, one of the most striking features of SARS-COV- 2 that emerges so far is, how little states across the globe did to prepare for it, despite watching it build up in China for months. In the past the same kind of speed of communication as we witness today, was missing. Information about the movement of disease was hence much slower, so laxity and gaps were understandable. It’s harder to forgive information and policy unpreparedness in our contemporary world. It begs the critical question: if it wasn’t more information that was needed to manage this crisis, what was it? (The Guardian, April 29, 2020).

Heejung S. Kim and David K. Sherman, professors in the Department of Psychological and Brain Sciences in the University of California (UCT, Santa Barabara) hold a special interest on studying impacts of pandemics and responses to them through world history. For recent pandemics such as the Ebola and the Corona Virus crisis, Kim and Sherman feel that perhaps collectivist societies are better equipped to handle the crisis than intensely individualistic socio-political systems. One explanation why countries such as China, South Korea, Taiwan and Singapore are emerging as better equipped to handle the crisis could be due to what specialist’s term as, ‘Protection Efficacy’.

Protection Efficacy, in the opinion of Professor Kim, is measured at three levels. One is a personal sense of efficacy, and the other one community, how much people feel that community can protect themselves. The third level is how much you feel that a country/your country can protect itself. It seems that collectivistic people especially in the face of a perceived risk/s, tend to have a higher sense of efficacy, believing   that their group will do something to protect them or their community, (University of California, Santa Barbara: March 19, 2020). The protective processes are coordinated and may work well together at macro as well as micro levels owing to high awareness towards sociopolitical accountability. These three are thus the vital inputs that endow an impetus to collective energies and well -being mechanisms which make Protection Efficacy possible.

Numbers and data behind deaths and actual rates of testing aside, other critical factors in effective pandemic management by ensuring protection efficacy thus seem to be:

Information seeking and sharing: The first two pints have been spoken about in the corresponding links shared against each. How well India is faring on information seeking and sharing is taken up in the part II of this article. By making a comparison across these three spheres we can acquire a deeper comprehension of how well India is faring in Protection Efficiency.

The big issue to consider is that COVID-19 may seem no different in terms of the horrors of death including macro well as micro distress, panic and suffering just like other pandemics but a nuanced look at pandemic management is still the most desirable posture to hold: Each country and culture can pledge to see the differences and work towards making a difference in disaster management.

Author Bio: Dr. Bobby Luthra Sinha works as Senior Vice President -Research at Osianama Learning Experience (OLE), Delhi.  As an independent  Political Scientist and Social Anthropologist, she engages in research, writing  and project-work on issues pertaining to environment, migration, development, social and protest movements. She is affiliated to national and international organisations on Migration and Social Science research in the capacity of a Deputy Director and core Executive Committee member.