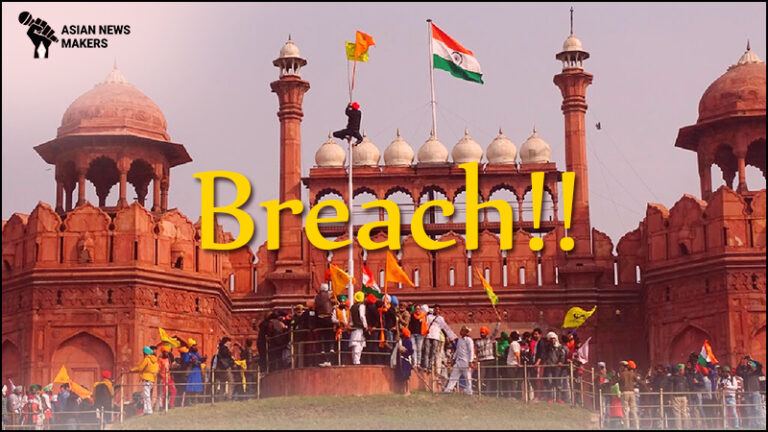 Amidst subdued celebrations on 72th Indian republic day on 26 January due to covid 19 and pictures of Rafael fighter planes for the first time marking the Indian skies displaying strength of a  powerful nation, pictures of  the Indian national flag twinning with the sacred flag of Sikhs, ‘the Nishan Saheb’ at the historic red fort rampart have also been marked forever as a documentation for future references of how the state refused to acknowledge the pent up public sentiments, which went wrong.

While unfurling of any flag on the red fort other than the Indian tri colour is  indeed condemnable, can we solely blame it on the ‘protesting farmers’ or the ‘miscreants’, when the authorities appeared to have ‘unprofessionally’ chosen to rely on testimonies by the protesting farmers’ group to maintaining peace and order in the massive tractor rally by farmers which was supposed to be attended by an unaccounted number of human heads.

There have been reports and videos on social media of how farmers had been reaching the national capital days in advance to be part of the tractor rally on the republic day and police too had been in regular consultations with the farmers’ group for the arrangements after giving it an official nod.

This was supposed to be a beautiful display of expression of fundamental right of expression on the ground although there had also been reports of how the youths were annoyed with restrictions laid out on the route, timings and the number of attendance in the tractor parade.

As it turned out to be, the tractor rally went amok and the capital roads along with the red fort was taken over by the protestors leading to a day-long violence and rampage in the national capital.

Do we term it an absolute lack of professional acumen of our police force or was it purely left to the farmers’ group to maintain law and order situations and also to tackle the eventuality of any untoward incident. Police was caught unawares and ended up being a sitting duck chased by the acrobatics of the tractors on the highways.

So where and how did it go wrong? While we may or may not be able to reach to the conclusive end to these questions it is important to take certain cues from the display of strength at the protected and historic red fort monument

We may see it as a one incident of protesting farmers going amok in the capital and placing the sacred religious flag on the rampart of the ‘protected’ red fort, it is important to segregate it  into two phenomenon and understanding accordingly.

One-day Celebrations of the constitutional establishment of the republic, on 26 January has a great symbolic value but in democracies every single day  is supposed to be a live example of the display of constitutional guarantees  to the citizens.

Two-months long protest of Indian farmers on the borders of Delhi highways has been an example of display of the guarantees of the fundamental right of freedom of speech and expression by constitution of India to the citizens. So far the protest has been lauded for its organisation and peaceful demonstration of expressions.

Call for the display of unity through tractor rally by the protesting farmers was ought to be the expression of this very  fundamental right guaranteed to the citizens through Article 19 (a) of the constitution.

This was to be an  absolute example of a functional democracy by way of peaceful expression of dissent after many rounds of failed discussions between the farmers and the government-which again is an agreeable and acceptable element in any democracy.

72th year of Indian republic too was also supposed to witness live, the constitutional guarantees to the citizen of India in form of ‘tractor rally as mark of unity’ by protesting farmers on the roads of capital Delhi.

The other important element of functional democracy was displayed by the police and the government by giving  the permission for the tractor parade.

Then where and did it all go wrong?

Did government allow to pent up farmers’ frustration?

Farmers have been sitting and protesting peacefully for almost two months on the borders of Delhi. Although contained, there obviously would have been the emotions and frustration which were panting up as there has been no headway after many rounds of talks.

The loggerhead continued between the government and farmers who have been firm on their demands to repeal the three contagious farm laws and legalising MSP. After the farmers refusal to government’s offer of putting the farm laws on hold for 18 months, government in the  12th and last round of talks was categorical that, “take it or leave it, this is our last offer”.

What else it was meant to convey other than that there was no room for discussion anymore and no scope of accepting the farmers’ demand as well? This coming close to the scheduled massive tractor parade sure may have been a cause for the build-up of frustration about where the protest would go further and how long.

Nishan Saheb flag at Red fort: how to read it?

While display of strength at the rampart of Red fort-a national monument of historic important as well as a ‘protected’ structure, is clearly a criminal act and a breach of security and is highly condemnable, it is important again to understand the intent of placing the religious flag on the pole which is supposed to display only the national flag of India, the tri colour.

While this is a matter of investigation who were those who instigated the farmers to break the security cordon and led the march towards unscheduled route and reached red fort and placed the religious flag,  the intent behind religious flag cannot be missed.

Farmers’ protest, after many rounds of failed talks and sitting under the cold and shivering sky had long become a matter of pride. Although this was never the movement of Sikh farmers alone but the farmers’ movement majorly was triggered from the state of Punjab and Haryana which has a dominant  and sizable Sikh farmers’ population.

The narratives at the protest site at Delhi border revolves around the famous Sikh clarion call of,  ‘jo bole so nihal…”.

There have been a clear build-up of emotions against ‘Hindu Nationalism’ agenda of the Narendra Modi government. The farmers have been visibly frustrated with the ‘Pro-Hindu’ and ‘Hindu-Rastra’ plank of the central government and vociferously expressing their grievances against the divisive policies of the government.

While show of strength by any religious group at the national symbols and public places are not a good sign but when the ruling party itself has not displayed any restrain in expressing its religion-specific agenda the trend, like what happened at the red fort  on 26 January, may not be a good precedent in the backdrop of the reports coming from Canada, UK and even the USA. The diaspora is visibly agitated and expressing unrestrained backlash against the government back home with commitment to back their ‘brothers’ in India. Diaspora is gathering up momentum against the Indian government in their show of strength.

There are always the possibilities of separatists and fringe elements taking advantage of the pent up emotions and ideological vaccume in such times as these and India has ample examples to take lead from the history of separatist movement in Punjab.

It is important for the government to respond with a ‘kid gloved’ approach  at this time instead of further disrupting the trust.