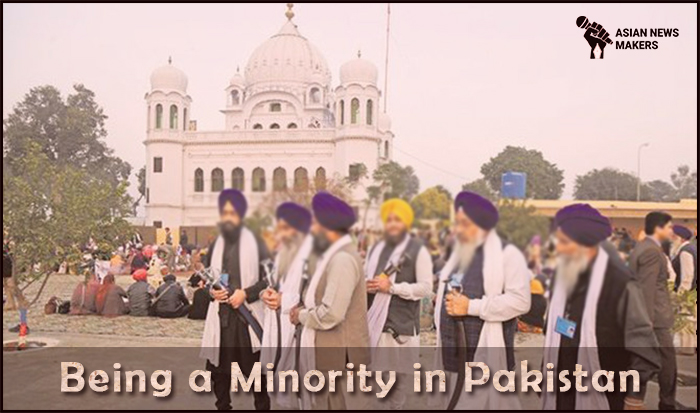 “The Sikhs … have been presented as highly warlike people … and Jihad is glorified as a way to drive them out,” says a study report by Catholic Christians on Pakistan government, its education policy and the fate of the minorities – Hindus, Sikhs and Christians in that country.

According to the report, the Hindus are repeatedly described as the ‘eternal enemies of Islam’ and their culture portrayed as unjust and cruel.

The Catholic bishops’ body the ‘National Commission for Justice and Peace’ published a study claiming that blasphemy allegations and violence against minorities and liberals in Pakistan were increasing in educational institutions.

Nuclear physicist and activist Pervez Hoodbhoy raised concerns about academic freedom in the country. “Forbidden topics include the nature of religious belief, any aspect of the blasphemy law, anything considered critical of certain notions of security and national interest,” he states.

Of some 250 universities, only three offer an option to study other religions, he claims, adding “No constitutional clause guarantees academic freedom in Pakistani educational institutions. Instead, the stated purpose of education is centered on a certain set of values: religion, ritual, tradition and submission to authority. The study of religions other than Islam is a controversial matter in Pakistan.”

According to a report by Catholic news website UCA News,  “Religious minorities are either invisible or portrayed negatively in Pakistan’s textbooks, educational researchers revealed as they highlighted incorrect statements on blasphemy laws.”

It says – Article 298 of the constitution of Pakistan was amended to the effect that anyone found guilty of blasphemy towards the Righteous Caliphs, the family of the Prophet [Muhammad] and the Companions of the Prophet could get up to three years of rigorous imprisonment or a fine or both,” states page 13 of the book of Pakistan Studies for Class 10 used in schools in Khyber Pakhtunkhwa province.

However, Tahira Abdullah, a women’s rights activist, disputes the claim, according to UCAN. “The passage contains incorrect statements, distortions and personal biases. The term ‘blasphemy’ is neither mentioned in the constitution nor in the Pakistan Penal Code (PPC),” she states.

Similar findings were shared in the latest study by the Centre for Social Justice (CSJ) titled “Quality Education vs. Fanatic Literacy” launched on Nov. 16 in Lahore. The authors shared their analysis of the textbooks approved by federal and provincial governments for classes and subjects of grades one to 10.

Abdul Hameed Nayyar, educator and scholar, slams schools for violating Article 22 (1) of the Pakistani constitution, which reads, “No person attending any educational institution shall be required to receive religious instruction, or take part in any religious ceremony, or attend religious worship, if such instruction, ceremony or worship relates to a religion other than his own.”

He explained that the rights of religious minorities are always violated and asks that non-religious subjects not contain religious lessons. Riaz Ahmed Shaikh, who is dean of the Department of Social Sciences and Education at Shaheed Zulfikar Ali Bhutto Institute of Science and Technology (SZABIST), reiterated the need to introduce sensitivity, acceptance and tolerance towards other religions in school textbooks, according to another report in ‘AsiaNews.it’.

Meanwhile, other reports also say that there is something wrong in Pakistani education system and how they promote fundamentalism among Muslim youngsters.

According to Abdul Hameed Nayyar, a retired academic, the study is an indictment against the country’s educational officialdom and holds it responsible for poisoning youth against religious and ethnic diversity.

“Pakistan has suffered immeasurably on account of the mishandling of young minds for about four decades. Successive generations have slowly turned into social pariahs on the global scene. They are not only devoid of any useful social skills but are also easily attracted to destructive ideologies and movements,” he stated.

“Minority children are forced to hide their identity in schools. Content from other faiths should be included in textbooks. The government is still in denial mode. Even my daughter in fifth grade knows that her classmates do not sit with Christian students,” he said.

Reports also say a Christian teenager Sharoon Masih was beaten to death by Muslim classmates for drinking from the same glass as a Muslim at MC Model High School in Burewala, Punjab province.

In 2013, Junaid Hafeez, a former English lecturer at Bahauddin Zakariya University, was arrested after being accused of posting derogatory comments about the Prophet Muhammad on social media. His lawyer, Rashid Rehman, was later shot dead in 2014 for representing him. “Identifying fundamentalism and hate material in textbooks is like attempting a failed paper. No measures have been taken so far to implement the instructions of a 2014 judgment to reform the curricula.”

On June 19, 2014, Pakistan’s Supreme Court, ordered the federal government to create a national council to promote the rights of minorities and provincial governments to create task forces to push religious tolerance, develop appropriate curricula in schools and colleges, protect places of worship and a crackdown on hate speech, among other measures.

India has from time to time expressed concern on the conditions of religious minorities in Pakistan.

“We have seen media reports of an 82-year-old Ahmadi man believed to have been shot and killed by some gunmen, apparently because of his faith, in Peshawar. This is, unfortunately, a sad reflection of the state of
minorities in Pakistan,” Indian Ministry of External Affairs spokesman Anurag Srivastava said in Delhi in November.

He also said: “Over a period of time, we have seen the space for people from the minority community to practise their religion shrink continuously. Besides, their condition remains deplorable”.

India has been consistently raising the issue of the safety, security and well-being of minority communities with the Government of Pakistan, MEA spokesman said.

According to reports, recently in a controversial decision the Pakistan government decided to hand over management of Durbar Sahib Gurdwara in Kartarpur to a body without any Sikh representative.

India on November 6, this year also had summoned Pakistan’s chargé d’affaires in Delhi, Aftlab Hussain Khan, to lodge a protest against Islamabad’s decision.

“The CDA of the Pakistan High Commission was summoned and our strong protest was conveyed.  It was also conveyed to him that this unilateral decision by Pakistan is highly condemnable and runs against the spirit of the Kartarpur Sahib Corridor as also the religious sentiments of the Sikh community
at large,” MEA spokesman has told reporters.

“We have received representations from the Sikh community expressing grave concern at this decision by Pakistan targeting the rights of the minority Sikh community in Pakistan. Pakistan is called upon to reverse its arbitrary decision,” he said adding it is obvious that the Sikh minority community cannot be “deprived” of the right to manage affairs of the Holy Gurudwara Kartarpur Sahib.

“Such actions only expose the reality of the Pakistani government and its leadership’s tall claims of preserving and protecting the rights and welfare of the religious minority communities,” a statement by the Indian Ministry of External Affairs has said.

Of course, Pakistan government denied what it said India’s “propaganda” against Kartarpur Corridor.

“The malicious propaganda by the Indian government is simply an attempt to malign the ‘peace corridor’ initiative by casting mischievous aspersions against the interest of the Sikh community,” a Pakistan foreign ministry statement had said.