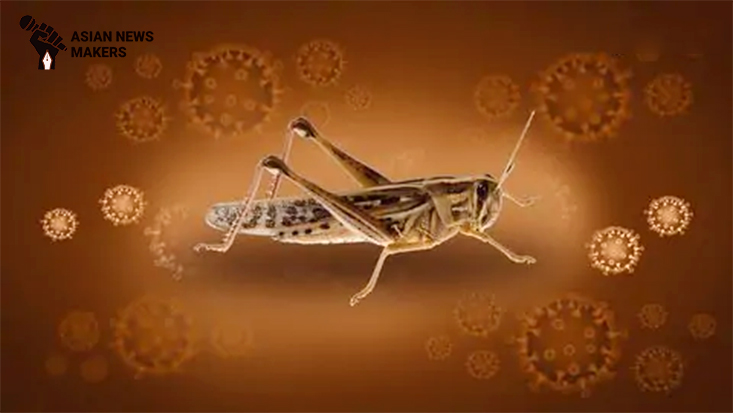 Year 2020 and the triple Environmental woes in South Asia

For the Covid 19-hit south Asian region trouble seems no end. As if the landfall of two cyclones, Amphan and Nisarga, too close to each other was not enough, trouble is brewing  in the form of locust swarms attacking South Asia. Amid the current pandemic times, these three environmental calamities put a  direct question mark on the food security in the region that is already known for poor indicators in health, nutrition and quality of life.

May and June 2020 are highly significant as they come ensconced between the devastating aftermaths of Cyclone Amphan and carried the fury of yet another, the Nisarga. May and June also brought South Asia millions of ravenous, destructive and totally uncalled for visitors in the shape of locust swarms over its skies, cities and fields. Increasing occurrence of cyclones that create unusual humidity are emerging as an important background to the rapid breeding of locusts in South Asian countries.

For local communities, locust swarms of 2020 are turning out to be one of the most perilous aftermaths of monumental environmental burdens caused by cyclones. According to a warning issued by UN’s Food and Agricultural Organisation (FAO), the regions adversely affected by locust swarms, can very well enter into a food security crisis especially in wake of the encumbrances and restrictions in place due to the COVID-19 pandemic.

Known to devour wheat, cotton, maize, other crops, leaves foliage and stems of plants et.al, a locust can consume its own weight-worth in food which is approximately two grams of fresh vegetation. The threat to food and crops in wake of the locust infestation is so grave that a national emergency was declared by Pakistani Prime Minister, Imran Khan earlier this year.

Locusts proliferate in areas where rainfall and green vegetation are plentiful and rapidly breed into havoc-wreaking swarms. In South Asian countries such as Pakistan, owing to exceptionally wet winters in 2019, regions such as Baloch and Sindh have been the worst hit with the swarms this year. Warnings have indicated that the swarms will continue to breed and search out the Rabi crop in neighboring regions.

In India, for instance, huge, destructive swarms of these vegetation- hungry, short-horned insects have invaded more than two dozen districts. Covering more than 50,000 hectares of desert areas of western India, the swarms have swept through Rajasthan, Madhya Pradesh and Gujarat which are the worst affected states. Suburbs of Haryana and Delhi too have not remained out of bounds for the locusts but as these swarms did not settle down on crops, not much harm has yet been recorded.

Cyclone And Locust Breeding. Is There A Connection?

A senior locust forecaster Keith Cressman, states that an increasing frequency of cyclones in the Indian Ocean in past three years has played a crucial role in breeding the current locust upsurge. One of the less visible impacts of climate change is how it is set to alter the dynamics of pest spread and reproduction. While desert locusts have been a longstanding threat, something more is definitely changing.

Cyclones and Locusts Swarms: A perfect storm or a two front-war?

Local communities especially in the western and eastern regions of India have already borne the brunt of cyclone Amphan and Nisarga.The question is will South Asia be able to devise timely combat measures to manage these disasters or will it reel under the devastating trinity of the cyclones, locusts and the  pandemic?

It is predicted that locust hazard will continue in India till July 2020 and at least seven states are likely to combat the infestation.The locusts may zero in on cropping areas or fly eastwards towards Madhya Pradesh, Uttar Pradesh, Maharashtra, Chhattisgarh and as far east as Bihar and Odisha. If authorities fail to contain the fast-spreading swarms soon, extensive crop losses will be an undesirable fallout this season.

Long term regional and environmental impacts and trends that the two cyclones, namely, Amphan and Nisarga close on the heels of unusual locust swarm attacks would bear on the region are yet unclear. Nonetheless, the instantaneous double trouble that environmental anomalies is hard to miss: Together with the pandemic inflicted health crisis upon South Asian countries such as India the locust swarms over the region may throw it into another humanitarian crisis resulting from food shortage.

Moreover, with lockdowns just beginning to open, social distancing still in place, South Asian countries are trying hard to save their economies from a downward spiral. Aside from the macroeconomic implications on key sectors as health, industry and investments, the region is also dealing with newer microeconomic manifestations of poverty and inequality. Reverse migrations have already impacted millions of families in India and plunged rural areas into a high economic distress.

On June 3, 2020 Mumbai escaped the fury of cyclone Nisarga, left the commercial capital of India without much damage as it made landfall in Alibaug, a beach town near the city. However, Gujarat and Maharashtra on India’s western coast, which did register devastation caused by the Nisarga, are not as exposed to cyclones as the country’s eastern coast is. This year unusually warm surface waters in the Indian Ocean lead to a weather depression which quickly formed a severe storm in the Arabian Sea on India’s western coast,

With a velocity of more than 100km/h, the wind impacts from Nisarga further strengthened upon touching the hot waters of the Arabian Sea.

Amphan that hit South Asia on May 20, 2020, two weeks before Nisarga and was the more devastating out of the two thrust an added challenge to the South Asia: protecting impacted people from becoming infected by the corona virus while they were packed inside emergency shelters. Even in normal circumstances, the aftermaths of cyclones, storms and other forms of nature’s anomalies throw the most vulnerable sections of the population in high distress. Managing multiple natural catastrophes amidst holding up a collapsing public health system owing to the global pandemic have further exacerbated the vulnerabilities of the most affected and needy.

Cyclones Amphan and Nisarga had a landfall over the region barely two weeks apart from each-other. While these two storms were enough to thwart and/or complicate the COVID-19 efforts in affected areas, the arrival of locust swarms pushes India and South Asia to ponder over the following:

Tropical Cyclones Of South Asia As Harbingers Of A Monumental Havoc

South Asian region accounts for diversified climatic zones and threats. Tropical cyclones of South Asia are events that can occur with little or no warning and can cause extreme devastation.

Comparatively speaking, tropical cyclones are less likely to form in the Indian Ocean than in the Atlantic or Pacific basins. But storms and cyclones as Amphan, that do form in the warm, shallow waters of the Bay of Bengal have a reputation of having a severe intensity and being unusually damaging for the following reasons:

Disaster Preparedness, Need Of The Day In South Asia

With the arrival of the monsoon season in India, locust swarms usually enter its desert areas via Pakistan for breeding in the humid and wet months of June-July. This year, however, pink adult swarms have been reported since as early as end of April in Rajasthan and Punjab.

As greenhouse gases continue to heat the ocean and the atmosphere, floods and cyclones are becoming more common, increasing the possibility of frequent locust attacks. Alongside delineating resources for dealing with the pandemic and reversing losses caused by Nisarga and Amphan, South Asia will have to devise an active strategy towards locust containment. An earnest dedication to environmental issues directly related to peoples’ well-being is the need of the day.

Aside from sharing magnificent environmental resources, the region witnesses grave ecological challenges as well as environmental activism in face of policy lapses.

An increasing tryst with natural disasters, as amply evident in the first half of 2020, should serve as a wake-up call. Concerned development experts, civil society members, policy makers and stake holders should now insist on a two-pronged approach:

South Asia, a region that has always counted on an immense treasure house of shared natural resources, is ironically not only a climate change red zone but also home to a total of 600 million people living below the poverty line. What went wrong?

A good way to warm up towards possible answers to that question would be mitigating the gap between nature and nurture. Nothing could be more timely given the fact that the region’s vulnerable populations are already reeling under the COVID-19 caused disruption of livelihoods and food supply chains. Current environmental disasters amid the scourge of COVID-19 leave the region with scantier resources and herald unforeseen sociopolitical and fiscal problems. Corrupt projects, wasteful use of resources, time and money form an additional bane to a holistic, people oriented environmental well- being in the region.

In such trying circumstances, frugality of lifestyles stands out as a prime recourse which can ensure environmental healing alongside ecological well-being of local groups and communities. For tapping into its self- healing potential, South Asia will need to revive and update its wisdom of living harmoniously with nature while at the same time managing the well- being of society.

However, I argue that for attaining success in such ideals, it is not just the people but also the states that need a lifestyle change. Moving towards environmental healing and overall well-being of citizens is not going to be a one-way process.

Ecological Remediation: COVID 19 Has Given Us A Chance
By Asad Sultan