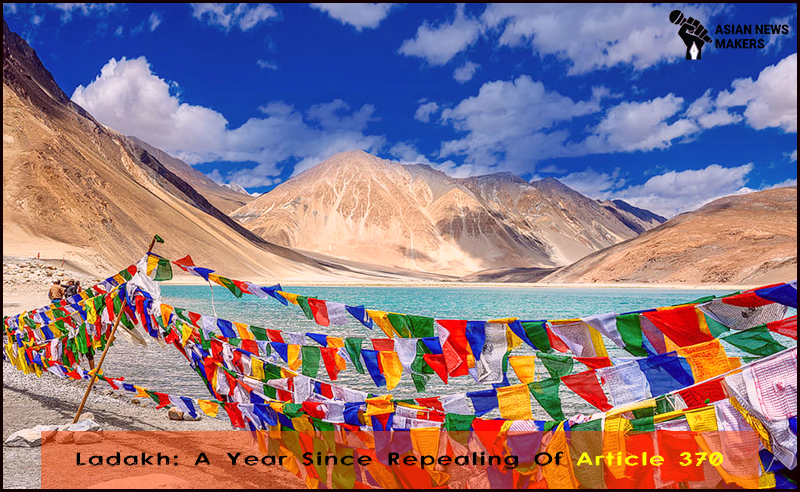 Stanzin Wangtak is a Leh based businessman. Stanzin belongs to the generation of Ladakhis which grew on the hotel business and seen it flourish. After his father he is the second generation which witnessed Ladakh changing from a rough, barren hilly terrain which saw only Indian army men as the visitors to one of the most sought after international tourist destination. These generations witnessed Ladakh shifting from agriculture-dependent population to tourism based economy.

But Stanzin is a worried lot today. He is witnessing a change again. Hotels are shut and the business is down to only 5 per cent of the previous years. One year since repealing of Article 370 had been tough but Covid 19 and border clashes between India and China have aggravated the troubles forcing the people of Ladakh back to agriculture and local produce for survival.

But he has a bigger worry. Since repealing of Article 370 Chinese aggression on Ladakh border  increased and the continued clashes in 2020 resulting in the killing of 20 army personnel has created an anti-china sentiments across the nation. People of Ladakh are anxious that the anti-China sentiments should not be directed towards them because of their Mongolian-Chinese looks.

For Ladakh and its people the year since repealing of Article 370 has been tumultuous. Parliament of India, on August 5, 2019, changed its character to a Union territory bringing it under direct control of the Central government.

People, since, have struggled to get clarity over administrative and infrastructural functioning. Ladakh is still struggling to understand the basic administrative functioning of its Union Territory character-even an important issue of the capital has not been settled even after one year of central rule.

While the region has not overcome the glitches of changed administrative structure Chinese aggression since repealing of Article 370 has put the people of Ladakh through an anxiety due to living under a constant fear of war.

Prolonged India-China border clash is the big worry for the people of Ladakh. Hostility between India and China and anti-China sentiments in India is a worrying factor as the people of Ladakh  fear a backlash from the fellow citizens due to their typical looks which resembles the Chinese people.

People of Ladakh feel it is important for the world to understand how integral Ladakh is to India and how, for people of Ladakh Buddism is an emotional and deep connect with India.

“We may be of the Chinese-Mongolian race but most of my countrymen will be surprised to know that we are much more closer to India than China in most respects. Majority of Ladakhis are fluent in Hindi because either we have been educated in different places of India or we have watched too many Bollywood movies,” emphasise Stanzin. But he is worried now because of the fact that anti-China sentiments might result into hostility towards them because of their looks of Mongolian-Chinese race.

Many like him feel that due to China-India clash there is an unusual attention towards Ladakh for the world. It is important for the world to know that Ladakh shares its history and cultures with India. “Even our food is much closer to Indian than Chinese food and like most Indians, Ladakhis are also crazy about cricket,” laughs Stanzin.

Not only food, culture and shared history but the religion is also the big binding factor of Ladakh with rest of India. Majority of the population of Leh district, and a minority of Kargil district of Ladakh are Buddhist. “For Ladakhi Buddhists religion is one big reason to feel connected to India- the birth place of Buddism. Bodhgaya, is an extremely emotional connect for the people of Ladakh with India,”  points out Stanzin.

Ladakhis fear a backlash for their looks

Historically Ladakh has been much more closer to Tibet than India. There were close ties in trade, culture and spiritual education. But things started changing from 1680 onwards, when the then Ladakhi kingdom had an altercation with Tibet. It is also true that the Ladakhi Buddhists, of the yellow sect, regard Dalai Lama as their spiritual head.

“Therefore, when China occupied Tibet in 1960, Ladakhis were personally hurt. If we assume that white means good and black is bad, then be informed, that in the Ladakhi language, we call India as ‘Gyakar’ or ‘Land of the hundred whites’, and China as ‘Gyanak’ or ‘The land of the hundred blacks,” says Stanzin.

Tension between India and China on the borders of Ladakh has people in the region worried. They have not witnessed the similar situation ever since 1962. “This is the worst situation since the Indo-Sino war in 1962. My father was in college in 1962. He remembers how Hindi-Chini Bhai-Bhai phrase was popular than. Now it has changed to Hindi-Chini Bye-Bye.”

In the changed circumstances when the border issue between India and China refuses to settle down and backlash for China growing in India people are scared that the same should not be directed towards the population of Ladakh spread over India. “As it is we are identified and addressed as ‘Chinki’ (used for those who have small eyes-a peculiar of Mongolian Chinese race) for our peculiar looks and are made fun off. This mindset should not prevail,” says Stanzin.

People of Ladakh who have yet to settle down with its new structure of Union Territory feel that Ladakh should be permanently free from the fear of Chinese aggression. They want the administrative glitches should settle faster so that people have their tourism back and normal lives back into gear. Border clashes along with Corona pandemic has resulted in nosediving of the economy of the region. People on this hilly terrain are too eagerly waiting for border clashes to end and “war” they say should never be the option.

Anxiety of Going Back to Schools Once Again!!