On 22 March, all major newspapers in India carried full-page advertisement from the Election Commission of India emphasising how the commission has been conducting elections through “EVMs since 2004” and “VVPATs since 2017” while also suggesting voters to be “an empowered voter”, along with two important tables, one, of last three election results of state assemblies held since 2004 and the other, clearly marking which party got the maximum and second maximum seats in the Lok Sabha between 2004 to 2019 general elections.

The advertisement came at the time when five states in India are about to vote and the first phase of voting will start from 27th of March. The advertisement seems fine and in tune with its role when it addresses voters to feel proud to be “empowered” but it is violating its own ethics when it appears to be deviating from its important purpose of conducting ‘free and fair’ elections.

The advertisement is highlighting how the election commission has successfully used EVMs and VVPATs since 2014 and 2017 respectively to conduct elections and that is how it appears to be suggesting that the EC has been trying to empower the voters of the country to exercise their right to vote as “an empowered voter”.

The advertisement has published the famous cartoon of ‘common man’ by cartoonist R K Laxman, saying “I am an empowered voter”, but along with it are also published two tables which is questionable. 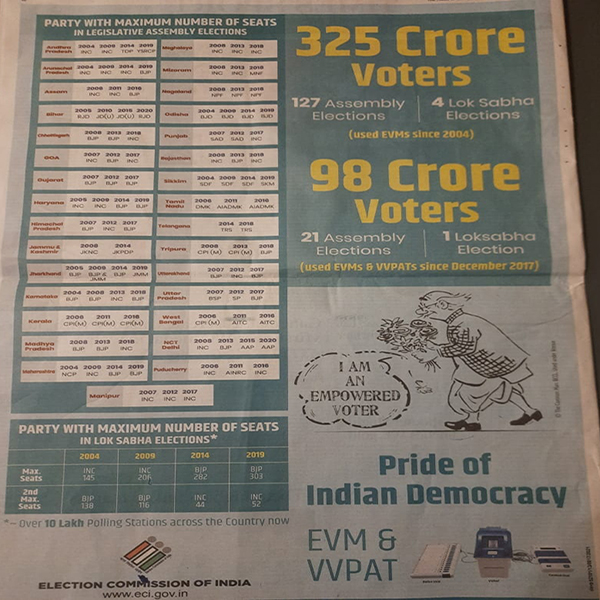 One of the tables with state assembly data has the title, “Party With Number of Seats in State Assembly Elections” while another table which has data since 2004 Lok Sabha results has the title- Party With Maximum Number of Seats in Lok Sabha Elections”. This is where the EC appears to be clearly deviating from its role of conducting ‘free and fair’ elections as there is no justifiable rhyme and reasons as to why the EC should publish the results highlighting which party has won maximum seats in which particular year.

The table highlighting the Lok Sabha results clearly shows how the Indian National Congress (INC), which had maximum numbers in the Lok Sabha with 145 seats and Bhartiya Janata Party (BJP), with 138 seats got the second maximum numbers. The progression and the decline of the INC and the BJP is absolutely clear through the results of 2009, 2014 and 2019 respectively. It is a very clever and an easy way to explain how BJP has been meteorically rising while the INC is losing its base suggesting to the voters how to make their voting choices. The advertisement apparently is violative of the role and functions of the Election Commission of India in organising the elections of the largest democracy, India.

The EC has the prime responsibility to ensure the conduct of ‘free and fair’ elections in the country. Towards this end, the commission has to implement norms and model code of conduct. Since the role of the EC needs a high degree of independence and autonomy the constitution has empowered this body with power to supervise the political bodies and candidates. It has the power to take actions it deems appropriate in case of any violations.

One of the important roles of EC is to see that there is no violation of model code of conduct by the political parties in the fray by way of influencing the voters’ choice. But when it itself appears to be deviating from role and responsibilities and seems to be influencing the voters is it possible to expect a free and fair electioneering?