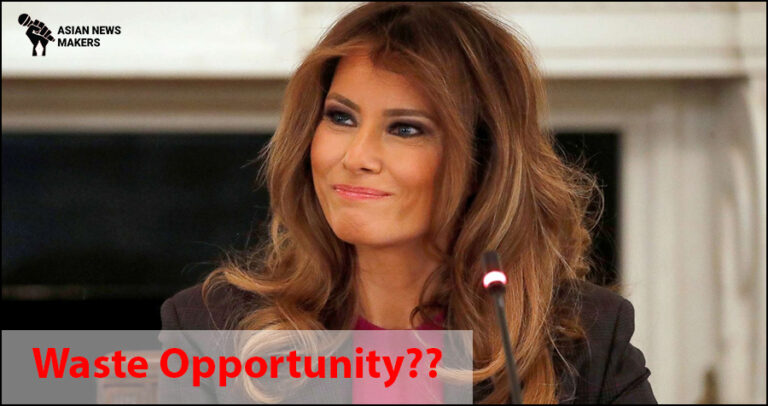 What was outgoing US First Lady Melania Trump doing while Capitol Hill was under siege? Collecting photo albums!!

When rioters were storming the Capitol Hill on January 6, President Trump was allegedly enjoying it live streamed on TV while the First Lady was busy collecting photo albums of her first and probably last time as a First Lady and organizing photo shoots of rugs and ornaments, along with discreetly packing up and sending her luggage to their new, would be residence, Mar-a-Lago Club in Palm Beach, Florida.

A report quoting a staffer said that since the fall of her husband, Melania has been getting ready to go home, behind her husband’s back.

Kate Andersen, author of ‘first Women: The Grace and Power of America’s Modern First Ladies, tweeted, “There has never been any first lady as stubborn and defiant as Melania. In her free times she took up ‘albuming’ and made scrapbooks full of photographs of herself. She certainly had a lot of free time. What a wasted opportunity,”

True, Melania spent four years as First Lady, mainly doing nothing, unlike her peers, who initiated many social causes and still are associated with them, years after leaving the White House.

Sounds unbelievable now, but outgoing First Lady of America, Melania’s approval rates according to a 2018 CNN poll have been higher than her husband’s-the kicking and wailing President Donald Trump. 57% of Americans carried a positive impression about Melania Trump and yet, happily voted her-nay her husband, out of the White House.

While US First Ladies have no fixed roles, they have ample opportunities which can be left behind as a legacy.

Can we count any in Melania’s case?

What is Melania Trump leaving behind besides the images including the one with green jacket displaying, “I really don’t care, do you?” during a trip to migrant child detention centre in 2018.

Unlike Melania Trump, her predecessor Michelle Obama embraced her husband’s presidency by moving bag and baggage within the first week of Presidency to the White House with her daughters. Her first few weeks were fruitfully utilized by transforming herself in her new role as a first lady, initiating her ‘let’s move’ campaign.

Melania on the other hand, stayed with her 10-year-old son Barron, so he could complete his school year in New York City. The cost of her staying in New York and the school commutes cost the taxpayers nearly $1 million each week.

However, it is alleged that Melania’s excuse of staying put in New York was an excuse for her to negotiate a deal with her husband, for the benefit of her son.

In her last video message as the First Lady, Melania talked about the legacy of her only campaign – Be best, a campaign no one had heard about until now. “But our work is not done,” she says.

“As the legacy of ‘Be Best’ comes to a close at the White House, we must continue to give a voice to our nation’s children and the issues that impact their lives. It is the values and spirit of the American people that inspired the launch of Be Best and I know it is those values that will carry on its mission,” She said.

Unlike her President husband, Melania did mention the riots of January 6, 2021. “I am disappointed and disheartened with what happened last week. I find it shameful that surrounding these tragic events there has been salacious gossip, unwarranted personal attacks, and false misleading accusations on me – from people who are looking to be relevant and have an agenda. This time is solely about healing our country and its citizens. It should not be used for personal gain.”

Leaving White House with no legacy behind!!

Yet another rumor emanating from the Presidential grounds is that the First Lady is desperate to leave White House, so she can initiate divorce proceedings.

Some time back, she had reportedly told a TV show that she was repulsed by her husband and that they had a “very strange” marriage where they only “sometimes like each other.” No wonder, she had to rely on Twitter to get news about her husband’s various decisions and statements.

Insiders also talk about their separate sleeping quarters and that Melania allegedly did not want her husband to be the President.

There are however many firsts to her credit like –

Leaving the Presidential grounds after just one term and with no legacy behind, is a first time in the history of White House.

As the Trumps plan to make Florida their new home, it is highly unlikely that they will not carry with them the baggage of impeachment, mishandling of the COVID-19 resulting in deaths of thousands, the mismanagement of the Black Lives Matters movement and finally the fiery finale – incitement of riots at Capitol Hill resulting in deaths of five people, including a police officer. Graphic images of the insurrection of January 6 rioting, will not only haunt the nation for a long time to come, but also the Trumps, much after leaving office.

It is a known fact that the Trump Presidency, has been embroiled in controversies and lies, and once he leaves office, many criminal and tax evasion court cases will follow him. It is said that behind every man’s success is a woman, Donald’s woman did not watch his behind – nor the front.