India and China: Bargaining Tough For Peace
By Nirendra Dev 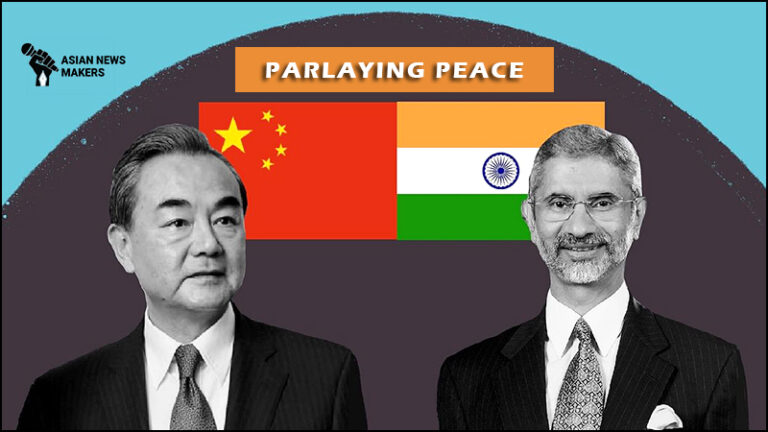 As the world watched India-China Foreign Minister’s meeting outcome in Moscow to ward off war-like situations on the borders, India pushed the line that the “immediate task” for China will be to ensure a comprehensive disengagement of troops in all the “friction areas” and outlined that it is necessary to prevent any untoward incident in the future.

China also remained in its conciliatory tone but there have been suggestions from certain quarters in Beijing that the Chinese side must be “fully prepared to take military action when diplomatic engagement fails”.

India-China at the Crossroads

At the meeting, Wang Yi said the China-India relations have once again come to crossroads. “But as long as the two sides keep moving the relationship in the right direction, there will be no difficulty or challenge that can’t be overcome”, a source in the Chinese side said.

Sources in the Indian government – after the much awaited External Affairs Minister Dr S Jaishankar’s meeting with his Chinese counterpart Wang Yi in Moscow on the sidelines of the Shenghai Cooperation Organisation (SCO) meet said – “The final disposition of the troop deployment to their permanent posts and the phasing of the process is to be worked out by the military commanders”.

“The Indian side clearly conveyed that it expected full adherence to all agreements on management of border areas and would not countenance any attempt to change the status quo unilaterally,” government sources told this journalist in Delhi.

New Delhi also maintained that the Chinese side has “not provided a credible explanation” for enhanced deployment of its forces along the LAC.

“The provocative behaviour of Chinese frontline troops at numerous incidents of friction along the LAC also showed disregard for bilateral agreements and protocols”.

Sources also said that from New Delhi’s point of view, it was emphasized that the Indian troops had “scrupulously followed all agreements and protocols” pertaining to the management of the border areas.

The meeting between two Foreign Ministers came on the backdrop that the Indian Army has reportedly ‘further strengthened and enhanced its dominance’ over a number of strategic heights overlooking key Chinese-held positions around Pangong lake area in eastern Ladakh.

Additional reinforcements have also been made in hill tops and strategic locations around Pangong lake.

However, the Chinese Foreign Minister also outlined “China’s stern position” on the situation in the border areas, emphasising that the imperative is to immediately stop provocations such as firing and “other dangerous actions” that violate the commitments made by two sides.

The Indian side highlighted its strong concerns at the massing of Chinese troops with equipment along the Line of Actual Control (LAC).

“The presence of such large concentration of troops was not in accordance with the 1993 and 1996 Agreements and created flash points,” it said.

Indian External Affairs Minister, Dr Jaishankar underlined that since the resumption of Ambassadorial level relations in 1976 and holding of boundary talks since 1981, India-China relations have developed on a largely positive trajectory.

While there have been incidents from time to time, peace and tranquility have largely prevailed in the border areas.  As a result, India-China cooperation also developed in a broad range of domains, giving the relationship a more substantive character.

While the Indian side recognized that a solution to the boundary question required time and effort, it was also clear that the maintenance of peace and tranquility on the border areas was essential to the forward development of ties.

Joint Statement by India and China

A Joint Statement issued at the end of the meeting said the two Foreign Ministers agreed on five broad issues and that the current situation in the border areas “is not in the interest of either side”.

They agreed therefore that the border troops of both sides should

The two Ministers agreed that both sides shall abide by all the existing agreements and protocol on China-India boundary affairs, maintain peace and tranquillity in the border areas and avoid any action that could escalate matters.

The two sides also agreed to continue to have dialogue and communication through the Special Representative mechanism on the India-China boundary question. They also agreed in this context that the Working Mechanism for Consultation and Coordination on India-China border affairs (WMCC), should also continue its meetings.

The Ministers agreed that as the situation eases, the two sides should expedite work to conclude new Confidence Building Measures to maintain and enhance peace and tranquillity in the border areas.

Earlier, the External Affairs Minister also met his Chinese counterpart Wang Yi in the presence of Russian Minister Sergey Lavrov in Moscow at the Russia-India-China (RIC) format and all three Ministers exchanged views on ‘further strengthening’ of Russia-India-China trilateral cooperation.

Meanwhile, an edit in ‘Global Times’ said – “Apparently, the Indian side is still severely misjudging the strategic situation with China, believing China does not wish for a conflict with India, while facing pressure from the US, and that India could force China to concede by nibbling into Chinese territory”.

It also said the Chinese people should not hope that a ‘single negotiation could’ make things normalise.

The Chinese side must be fully prepared to take military action when diplomatic engagement fails, and its frontline troops must be able to respond to emergencies, and be ready to fight at any time, the edit said.

The Indian Army has lately occupied heights that allow it to ‘dominate’ the Chinese Moldo garrison and the Spangur Gap under Chinese control.

Notably much to the discomfort of China, the Indian Army is also able to maintain its  hold at the Rechin La.

There were also reports of fire shots. These were vital as the previous instance of shots being fired at the de-facto border was in 1975.