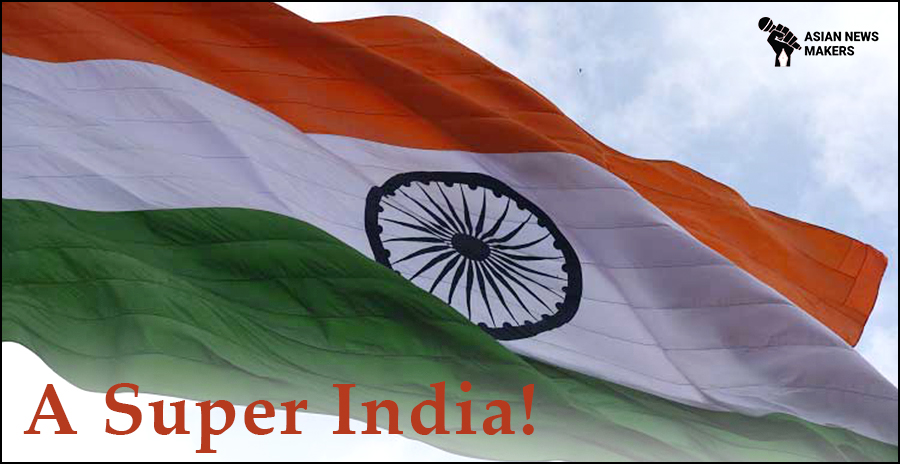 Recent forecast by IMF that India’s growth in 2021-22 will be 11.5 per cent should revive this hope of India joining the high table with big powers in the world. At the same time, the violence in capital Delhi on 72th republic day celebrations, shows India’s obstacles to becoming a big power. Let us look at the promise and performance of Indian politics, economy, society and defence which should constitute the pillars of a super power.

What makes a super power?

A super power is defined by matured politics, a harmonious society, a robust economy and a strong defence structure. These sectors put together help a country exercise dominant influence in international politics. The degree of dominance determines the power status of a country.

The United States with the biggest economy; strongest military with unrivalled dominance in the international security has been rated as a super power. The former Soviet Union which matched America’s military capability was the other super power at the time when military was the measure of a country’s strength.

Now military power has been backed by economic strength which determines the influence of the country. That is how China has substituted a truncated Soviet Union as the second big power in the world.

In the wake of this highly disruptive pandemic gripping the world, pharmaceuticals will add another element of power to a particular country. In that sense, India could emerge into the reckoning as it has produced two vaccines in record time and has begun to supply them to other countries.

Along with pharma sector, the capacity for innovation in technology would prove to be a cutting-edge in power parity of the countries. India with its depth of soft power and ingenuity for innovation could compete for world power status.

However, the other necessary ingredients have to be in place for catapulting countries up the power ladder. It is in order that we assess such ingredients in India’s journey towards that aspiration.

Indian society has been traditional with strong ethos of pluralism, as well as synthesis. There have been historic, culturally inherent inequalities which are often euphemistically called diversities. But such inequalities get eroded by the process of modernisation, industrialisation backed by education.

India has the largest education system next only to that of China and the United States. There are, as per the latest available figures, 17937 institutions, 348 universities, and 17625 colleges. India produces huge number of doctors, engineers and soft ware professionals who serve in and outside the country with distinction.

The downside however is when a society gets polarised; it becomes weaker as we saw it happen in the United States in the last four years. Polarisation pays immediate electoral dividends for the champion of the majority segment, but in the long term, it causes cuts cracks in the society. America is talking bout healing the wounds, and filling up the cracks.

The slogan and strategy embraced by the new president of America Joe Biden is unity. He used the word ‘unity’ at least 20 times in his inaugural speech on 20 January. How realistic is this approach? In a democracy, dissent is respected and diversity is celebrated.

Unity of ideas, initiatives and ideologies is not good for democracy. At least we do a shade better; we call it ‘unity in diversity’. No doubt, we want unity in adhering to laws, protecting the individual space institutional integrity and defending our country from external aggression etc.

On politics, we are a democracy in structure but not totally in functions. But we are better than many in the world. The danger is when politics polarises the society, suppresses dissent, and represses the dissenters. We may experience contest and conflicts in politics, that is natural in a democracy, but if we crush the opposition and behave like one party rule in China, we are on a slippery slope. Dialogue is an indispensable act in a democracy which enlivens politics by eliminating ill-will between losers and winners in a contest of ideas and policies.

Seen in the context of a dialogic and deliberative democracy, we are faltering when certain segments of people protest against certain decisions of the government- CAA and the recent laws on the farmers. We try to defame demonise and discredit the protesters. The consequence is ugly and violent incidents, like the one we witnessed on republic day with one farmer dead, many policemen injured some critically. The measure of a country’s strength lies in how well it manages its internal contradictions and conflicts which erupt from time to time.

The economy is the new measure of a country’s strength. Any social disharmony or political instability affects the growth of the economy. If we are focussed on the economy, our political and social squabbles will reduce. We have perhaps given up the ambition of becoming a 5 trillion economy by 2024 as promised by the prime Minister.

Looking beyond economy and defence to be a super power!

In the past, India’s economy never grew beyond three per cent which Prof. Raj Krishna put in a lighter vein as the “Hindu rate of growth”. With the resurgence of’ Hindu nationalism’, we witness a dip in our economic growth that had touched nine per cent under the UPA government.

The present government has to buck up; make the economy, jobs and equitable development their top priority if they have to contain and compete with China, let alone aspire to be super power.

In defence sector, we are the second largest army in the world. Our army is highly professional battle-ready. If anything, it has been let down by dithering politicians in the past. There are enough studies to show how the army has been let down in 1947, 1962 and 1965 and even 1971.

Be that as it may, having the best army alone does not confer the status of a big power unless it is involved in international operations in providing security etc, like US army in the middle East or Afghanistan. In order to be able to do so, we need to have a strong economy to support those operations.

The bottom-line therefore is to have a combination of economic strength, social capital, technological capacities and depth of defence in order to emerge a big power. We have the ingredients but we need to put them in right place.

To do so again, we need to have radical shift in our thinking as a country. What do we want to be as a country? Vasudhaiva kutumbakam, the world is one family sounds too good to be true. We have lots of such native wisdoms, we export far more Gurus than any country does.

But we fail to realise that pwer legitimises wisdom. There are more people learning American technology and Chinese culture than people studying Hindi and Indian traditions. David Schwartz in his Magic of Thinking Big says “You are what you think you are”. It means we have to start thinking as a big power, our behaviour would change accordingly and we would become a big power. We will be exemplars for other counties, we will not burn buses, destroy public property, disrespect women and dishonour national symbols. Let us sink this in our minds.