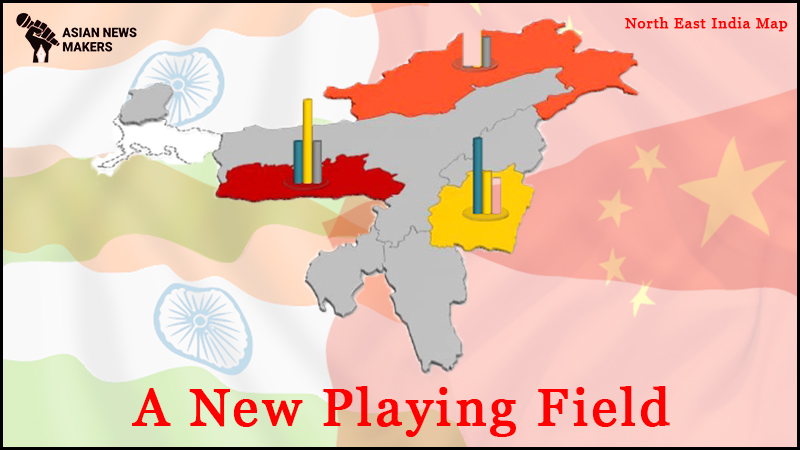 North East India may prove to be a game changer in geopolitics of South East Asia. Recent developments in the region have exposed India & China to each other like never before.

As armed forces in India and China are more often engaged in eyeball to eyeball contacts and confrontation along the border, there is a need to appreciate the fact that both the Asian giants are now exposed to each other on the borders as never before.

There is a sudden significance of Asia and South Asia in international and global geopolitics due to India and China border tussle. The recent developments not only highlights border skirmishes but the row In effect is deeper.

What do the new changes mean?

In geographic sense, the Himalayas had kept China and India “walled” from each other. But the world has changed now. The dense forests are getting cut down, difficult terrains and rough roads would be soon replaced by superhighways and even insurgencies getting crushed. Thus, the great frontiers – one knew – have vanished.

There is now an unprecedented connection among the three billion plus people of South East Asia and the Far East. This is perhaps the first time in recent history.

According to a former Nagaland Minister, Thomas Ngullie, “Even the long-held view that northeast India is a landlocked region is undergoing changes. That means totally new economic, social and political lines may emerge”.

As we take note of this statement, we know the Look East Policy pushed by New Delhi initially, was actually conceptualised as a maritime orientation. But as India expanded the engagements with the ASEAN members, for obvious reasons the importance of the northeast as a ‘land bridge’ has increased manifold.

In view of these developments, it is imperative to note what would be the importance of ongoing Peace Parleys with northeast militants by the Government of India including the Nagas.

Therefore, from New Delhi’s point of view vis-a-vis the northeast India and vulnerable states like Nagaland, Arunachal Pradesh and Manipur, the security experts have now decided to work in tandem with the catalysts of development.

“It is time all stakeholders including Naga or ULFA militant leaders understand that the northeast India’s economy will increasingly get merged with the Asian and the larger global economy,” said an official in the know of things.

Therefore, there is a need to appreciate that once the multiple connectivity projects are built and become key trading routes; there will be a need to ‘protect’ the economic corridors and other infra assets.

That way, the Government of India and its ministries like Commerce and DoNER (specially dedicated to the northeast India) are now working in coordination with various agencies so that the northeast region could well emerge as the ‘regional supply chain’ of the manufacturing industries.

In other words, the Government of India has told concerned players in states such as Nagaland and Manipur that the northeast region needs to make sure that it does not remain only a ‘transit route’ but an active participant in the process of development and transition.

Is North East of India an emerging trade route of Asia?

Naga leaders admit that the opening up of Myanmar has “brought up” new opportunities and there will be possibly healthy competition to ensure ‘influence’ in this vital Southeast Asian nation and other neighbours.

The India-Myanmar-Thailand Highway is a major project in terms of ambitions for the entire region. This highway’s Imphal-Moreh portion on the Indian side has run slow and is expected to be completed only by 2023. Two decades ago, this transnational highway connectivity was envisaged to enable trade from India to the other ASEAN nations.

Some years back, strategists have also given importance to Bangladesh-China-India-Myanmar (BCIM) forum. But somehow, no much headway was made on this.

India’s participation has been always described as ‘camouflaged’ – mostly represented by think tank participants instead of official representatives.

One reason cited for New Delhi’s skepticism is India’s Northeast has been an insurgency-hit region, and suspicions of foreign interference were paramount.

There is also fear of exploitation of the rich natural resources and biodiversity of the Himalayas and opening of scope for greater Chinese involvement in the region.

No wonder, the last BCIM Forum was held in Myanmar in 2015 and one has not heard much on these.

But in the ultimate analysis, the importance of northeast India ad countries like Myanmar have certainly increased manifold in the geopolitical calculus of great powers.

Detox and Stay Fit During Pandemic By Dt Sonika Mathur