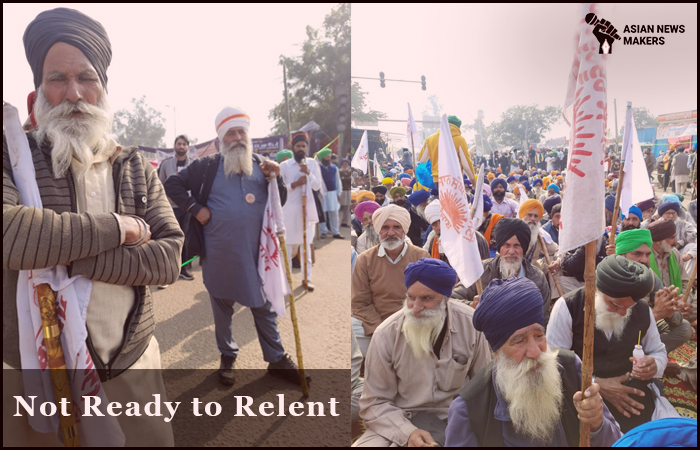 Chilly winter winds, dipping temperatures, deaths of their fellow farmers and hardships of spending endless days and nights away from the comforts of home and indefinite and uncertain wait for the government to blink, none is able to crush the spirits of these farmers of northern states of India.

A month at the border of capital Delhi and many rounds of failed talks with the government of India, the loggerhead continues amidst swelling support and expanding narratives at the protest sites.

Between November end to December end the mood of the farmers is stronger, they are angrier and more adamant. “The option for the middle way”, they say, “is over”. They want nothing, “but the repealing of three farm laws”.

Delay in consensus of every single day is pushing the narrative beyond just the “black farm laws”, as farmers describe it. With more and more people across the rural and urban divide sympathising with the farmers’ cause the narrative is not only unfolding against government but clearly against the central leadership i.e prime minister Narendra Modi.

The farmers are at the borders, ready for a long haul. All prepared and organised, to hold and wait, as long as the government takes to blink.

A young farmer from the state of Rajasthan, Ganganagar, Sahejpreet Singh said, “they knocked Delhi to make their voices heard, waited for the government to listen, and talk. With many rounds of talks the option to middle path is over. The only way now is the repealing of farm laws. No more, no less.”

The social media narratives against the farmers and the name calling for the farmers through certain part of national media has changed the mood of the farmers from just the repeal of farm laws to anti media and anti-government and to be precise anti-Narendra Modi.

Farmers are hurt that there is no effort from the government to stop either the media narrative which they call “Godi Media” (a term popular for paid media) nor through the statement of any official or the minister which could soothe their feeling and stop the false agenda against the protesting farmers.

Now it is the matter of “our Pagg”, or the turban says another farmer from Haryana pointing out towards his head gear or turban which they call “pagadi or Pagg” in Punjabi language. This means other than just being the issue of repealing of farm laws the matter has become now of the pride of the farmers’ community.

“why not”, retorts an old farmer, we not only feed the entire nation but pump the entire economy. We can’t let the corporate take over our land who are eyeing the whooping farm sector”.

The false media narrative and the ‘Khalistan’ propaganda against the protesting farmers have not only hurt the farmers hard but have scratched an extremely delicate wound of entire state of Punjab.

The protest site is a reflection of a mini township–many big community kitchens called langars organised by Gurudwara Prabandhak Committees (gurudwara management committees) to NGOs and many mini langars for various day to day services keep the guards up and spirits stronger.

At Sindhu border the protest site is marked by a long row of make-shift toilets with water supplies from the Delhi government tankers and the barricading of barbed wires and patrolling police posse.

During the second week of December there was a makeshift wobbly bamboo stick stage with open roof and was free for all to speak whosoever wanted to open up their mind and express grievances against the farm laws.

Hundreds of farmers sat in front of the stage on floor-spreads and tried to catch the loudspeaker blaring the speech. Others either rested in their tractor trollies, had food, or just were busy in the arrangement of food and utilities for the night food and day to day items.

There were however few who came for a day visit from the cities in groups to show solidarity and raised slogans.

But by the several rounds of failed talks and no efforts from the government’s side by the third and fourth week at the Delhi borders, sentiments at the protests site changed significantly which signals a wave of change.

The day prime minister visited the Gurudwara in Delhi as a mark of sympathy towards the Sikh community on December 20, the stage management and the rhetoric from the stage changed dramatically.

The day started with the Ardaas (prayers) for the dead protesting farmers who were declared the ‘Martyr’. Pictures of these farmers were garlanded and announcements were made to gather in the evening for candle lighting ceremony to pay homage to these “brave farmers who laid their lives for their land”.

The rhetoric from the stage had changed too. It was not only restricted to the discussion about the harms of new farm laws and how it was important to repeal these but also how the current government has been misleading the people of the country in the name of religion.

The rhetoric and the anger of the farmers were visibly extended from the “harm full farm laws” towards the “pro-hindu” ideology of the “RSS which the BJP is pushing in the name of governance and creating a divide”, in the country, which “would not be accepted”, said these farmers and their leaders in one voice from the stage.

The name calling of the prime minister was clear and loud, through slogans raised by various groups which keep joining the chorus time to time from different organisations on the protesting sites.

Weekends are attracting people in numbers. These are not only the people from rural Punjab but the professionals from adjoining cities including Delhi who want to share their sympathies and also understand the farmers’ cause.

A common feeling which is emerging out of these protest sites and connecting people strongly beyond just the new farm laws is “we have struggled hard and have lost so much to regain this country, can’t let it go waste in the name of Hindu agenda”.

As the loudspeaker blared, “This movement of farmers would bring in a new change,” I just looked at the sea of turbans and raised hand… “Jo bole so Nihal..Sat Sri Akal” (One who utters the grate timeless lord shall be blessed and happy), a Sikh clarion call.

And there were few other farmers with their welding machines and iron rods, all ready to replace the make-shift bamboo stage and tents into a sturdy structure.  “We are even ready to sit in for next two years if this black law is not repealed”, said Gurnal Singh, a farmer from Amritsar district of Punjab.

Are the leaderships missing something amidst dealing with the farmers’ protest?