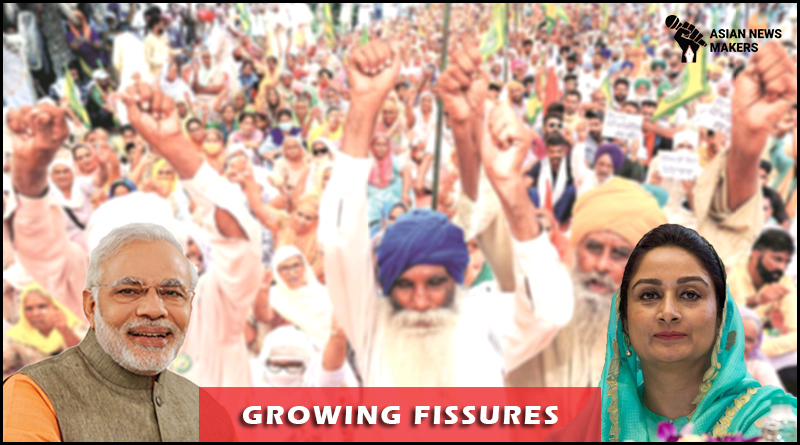 Akali Dal leader Harsimrat Kaur Badal’s resignation from the Modi cabinet is certainly a setback for the BJP leadership and Prime Minister Narendra Modi as this is the first challenge to a government decision by a member of the central cabinet.

Akalis have been the most dependable alliance partner of the saffron party formally since the 1990s and ‘informally’ stood by it even during Emergency days in 1975.

The resignation also supports opposition allegations that the Modi government was perhaps following a pro-corporate policy while ignoring farmers and the poor for the last six years. For Narendra Modi, it was also a bit embarrassment as the resignation of a woman colleague from a minority Sikh community and daughter-in-law of 93-year-old Parkash Singh Badal came on PM’s 70th birthday.

Akali Dal, a party of the Sikh majority, has not formally yet quit the BJP-led alliance, but the move challenges the BJP’s Hindu chauvinistic politics that have brought sharp criticism from two other religious minorities — Muslims and Christians.

A day after resignation of Akali Dal leader Harsimrat Kaur Badal from his cabinet, Prime Minister Modi on Friday had no choice but to strongly defend the new measures of his government saying those were all necessary reform strategies.

“These Bills are like Raksha Kawach….These reforms will give farmers a new freedom to sell their produce and also give them a series of new ‘vikalps’ alternatives,” Prime Minister said addressing a function marking the launch of new rail projects for poll-bound Bihar.

The Lok Sabha on September 17 gave its nod to two Bills – The Farmers’ Produce Trade and Commerce (Promotion and Facilitation) Bill, 2020’ and the ‘Farmers (Empowerment and Protection) Agreement on Price Assurance and Farm Services Bill, 2020’.

“It was utmost necessary to bring these bills as they can do away with the middlemen who used to eat up the lion’s share of business between the farmers and the consumers,” Modi said.

Charity, they say begin at home. So, when Prime Minister Narendra Modi talks about a politics without ‘dynastic’ families – has he disturbed some unexpected quarters?

Are two dynastic-based political parties and good and dependable allies – Shiv Sena and Akali Dal – are uncomfortable with Modi’s ‘New India’ politics where one has to come up the ladder the hard way?

The Shiv Sena, ironically BJP’s oldest ally in Maharashtra, is already a bitter rival now. It parted ways and aligned with Congress and NCP to form a coalition government.

And now, come to Punjab and the Union Food Processing Industry Minister Harsimrat Kaur Badal staged a walkout in Lok Sabha on Thursday (Sept 17) and quit the Modi cabinet. Obviously, the issue is said to be three contentious farm Bills.

“I have resigned from the Union Cabinet in protest against anti-farmer ordinances and legislation. Proud to stand with farmers as their daughter and sister,” Ms Badal tweeted.

We cannot forget that hours before announcing her decision to quit the cabinet, Ms Badal in her missive in the micro blogging site had written – “Warm birthday wishes to our hon’ble PM Narendra Modi.  Your tireless efforts and dedication to make India ‘Atmanirbhar (self-reliant)’ are inspirational for all of us”.

This also raises some questions – when was Ms Badal being economical with truth? On her resignation issue or to compliment Modi for trying to make India ”Atmanirbhar”.  If the Bills were anti-farmers, Modi should not be credited for making India self-reliant and also vice versa.

Nevertheless, one of the Bills in debate seeks to ensure opportunities for farmers to sell their produce in open markets. So, what’s wrong in that? The existing system allowed commission agents to get their share of 2.5 per cent cut.

Farmers fear they will no longer get paid at the Minimum Support Price that is decided by the central government from time to time.

Well, the commission agents – who have been dominating the agri marketing scene for ages in Maharashtra or Punjab – have reasons to be upset. Punjab has over 12 lakh farming families and quite a substantial 28,000 registered commission agents.

But if the issue is political, will it be right to examine whether the BJP took a risk in antagonizing the Shiromani Akali Dal (SAD), which is formally in alliance with the saffron outfit since the 1990s?

Can there be a political life for the BJP in Sikh-stronghold Punjab without Badals?

Come to hardcore politics, no party in Indian politics is as much realistic as the BJP. Thus, the whispering even a few months back that the saffron party leaders have been ‘interacting’ with S S Dhindsa, a senior Akali Dal leader who quit the Badals-led party, makes a lot of sense as in September 2020.

In the context of Harsimrat Kaur’s resignation, one also finds logic in BJP trying to reach out to another Akali dissident R S Brahmpura. He has already floated Akali Dal (Taksali).

The BJP-led regime in the centre also had played a soft ‘outreach’ politics when it awarded the veteran Dhindsa with Padma Bhushan in 2019. The grapevine is, Sukhbir Singh Badal and his wife Harsimrat Kaur Badal were not aware of the central government’s intent.

Of course, personally Modi has always held senior Badal – Parkash Singh Badal – in high esteem and during filing of nominations from Varanasi last year even touched his feet in front of the cameras.

Looking from another angle, it is pretty clear that the Akali Dal’s decision to quit the Modi government also had political compulsion as villagers in Malwa region in Punjab have warned they will not let any leader who supports the three contentious Bills enter the villages.

Peasantry certainly is the ‘backbone’ of the Akali Dal vote-bank in Punjab and Badals could ill-afford alienating the masses further especially after the party suffered humiliating defeat in 2017.

The joke in Punjab is Akali’s drubbing was worse than the Congress defeat in 2014 polls. Akali strength was reduced to just 15 seats out of 117. In contrast, the AAP had won 20 seats.

In 2019 Lok Sabha polls too, NDA show was not at all good and Akali Dal could only win two seats – Ms Harsimrat (Bathinda) and her husband Sukhbir Singh Badal (from Ferozpur).

The Akali Dal sources say Badals knew of their losing ground in Punjab and hence the party has been showing interest lately to expand its electoral base outside Punjab. But Sikhs being one of  the pragmatic of Indian communities, in any part of the country – they have befriended local parties, learnt the local language and even made it to assemblies and Parliament.

The BJP’s own S S Ahluwalia, a prominent Sikh Parliamentarian, represents Bardhaman-Durgapur Lok Sabha seat in West Bengal having wrested it from Trinamool in 2019.

Earlier, he represented Darjeeling on a BJP ticket. Rachhpal Singh is a Trinamool leader who represented Tarakeshwar assembly constituency and was Minister for Planning under Mamata Banerjee.

India’s Sikh population at present would be around 21 accounting for 1.75 per cent of the country’s total population. Out of the total Sikhs in India, over 77 per cent are concentrated in the state of Punjab bordering Pakistan.

Manjinder Singh Sirsa of Akali Dal represents Rajouri Garden constituency and has lately made news when he sought to support the BJP stance on the issue of drug menace in Bollywood.

He has lodged a formal complaint with the Narcotics Control Bureau (NCB) against filmmaker Karan Johar.

Of course, Sirsa has backed Ms Badal’s move to resign to protect the interest of farmers. “….her action shows her commitment to farmers,” Sirsa tweeted.

There have been certain other issues as well between BJP and Akali Dal.

In January, the Akalis had supported a resolution in the Punjab Assembly against the Central Citizenship (Amendment) Act.

The Akalis also decided against fighting the Delhi Assembly elections over its differences with BJP.

Akali president Sukhbir Badal during the ongoing Parliament session objected to non-inclusion of Punjabi in the new language Bill for the newly created Union Territory of Jammu & Kashmir.

There was also an argument that perhaps due to its proximity to the BJP and to keep balance with ‘Hindu aspirations’, the Akalis were moving away from their core Panthic agenda.

However, it was also given out that a Jat Sikh, Navjot Singh Sidhu was sidelined by the BJP for the former cricket star’s constant ‘confrontation’ with the Akalis at the local level.

Politics in an art of the possible.

Of COVID-19, Magical Realism, Vultures and Prophets of Doom: Die, The Argumentative Indian? I
By Dr. Bobby Luthra Sinha