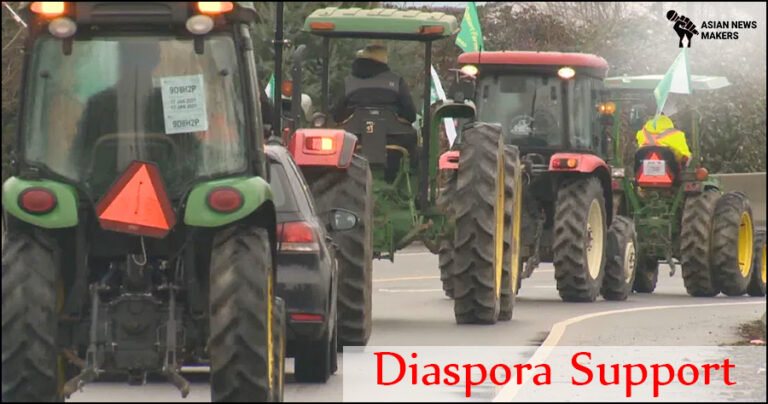 “Dilli Kooch” i.e “reach Delhi”, is what seems to be every farmer’s voice in India, which is celebrating 72th republic day on 26th January. Parallel to iconic republic day parade there is another parade to watch for this year, when more than hundred-thousands of tractors plan to march towards Delhi to take part in the what is expected to be the ‘world’s largest-tractor parade’.

This has been a spectacular sight on highways of India days before 26 January. Every single tractor from every single village house is on the highways, rushing towards the capital Delhi, to be part of this call for ‘world’s largest tractor-parade’ on 26 January.

However, this show of strength by protesting farmers’ in India, demanding the repeal of three ‘contagious farm laws ‘, is just not from within the country. The diaspora is standing tall and high in support for their ‘brothers back home’, in their own respective ways and pledge to support as and when the need arises.

One of the largest farmers’ movement in the world, happening now on the borders of India’s capital New Delhi, is getting wide-spread support from the Indian diaspora round the world.

The call for ‘Delhi Challo’/Dilli Kooch’ ‘reach Delhi’, in the capital of India was matched with ‘Surrey Challo’ call in Vancouver, around mid-January, where protesters had gathered in large numbers in their vehicles to mark their support with the Indian farmers but were turned away by the RCMP.

While one person was ticketed, the police, termed the event a public safety risk and violating COVID-19 restrictions, presently in place in the province, and turned others away. RCMP expected up to 10,000 participants at the event, which reportedly included some music performances, giving the event a festive aura rather than a protest.

Organizers of the ‘Surreychallo’ event, refused to talk to this reporter. In a press release, they stated, “Our Awaaz (voice) is deeply disappointed by the RCMP’s characterization of these protests as celebrations or “festivals” on their official social media channels which had the effect of misleading the public about the intent of the protest. Those of us who are helplessly watching these protests on the other side of the world have very few ways to express our collective concern and support – these protests here at home, are truly the only meaningful actions we are able to take.”

“The shutting down of this protest organized by a racialized community is an affront to the constitutional right to protest. Freedom of expression and freedom of association are fundamental democratic rights that must be respected,” says Meghan McDermott, BC Civil Liberties Association Policy Director and Staff Lawyer, in the press release. “This was an event that took safety measures and provincial health orders seriously but was arbitrarily and unjustly shut down by the Surrey RCMP even before any opportunity for alleging non-compliance arose.”

Parallel to a tractor rally by the farmers in India, a similar rally was held in another part of the province of British Columbia-Langley by volunteers. As many as 250 tractors and 300-400 cars, from surrounding areas, took to the streets, supporting farmers in India. Said one of the volunteer organizers Ishwinder Singh, “We are all law abiding citizens. We follow all COVID guidelines in the province. We had masks, hand sanitizers and we directed everyone not to come out of their cars and not to mingle.”

Originally from Uttrakhand in India, Ishwinder along with other volunteers claims not to have any political affiliations. “We are mainly motivated by humanity. It concerns us to see farmers sitting out in the cold on the grounds and the Indian government not heeding to their demands. We don’t want to see any violence or genocide happening there but a peaceful resolution. Our aim is to create awareness amongst the mainstream community and provide our support. It was a peaceful protest and no rules were broken.”

Prime Minister of India Narendra Modi has claimed that the new laws are aimed to help the farmers and that it is not BJP’s decision alone. Previous governments too wanted to bring in agriculture reforms but did not have the strength to implement them. India’s agricultural sector was long due for reforms and almost every political party have had the issue of reforms in their manifesto for a long time. As Moninder Singh, Spokesperson of BC Gurdwara Council put it, “System has been flawed since the British time, but no one wants to put their time and energy for development and research in the industry to improve agriculture.”

What are the new farm laws in India?

One of the aims for the new laws brought on by the Modi government is aimed to rid the mandi (market) system of middlemen, commission agents and money lenders. Small farmers have complained for years about being drowned in debt and non-payment for their produce by the commission agents, as a result of which, these farmers resort to suicide.

Opines Moninder Singh, “As per the new law, larger corporation will offer the farmers a higher price than the MSP and eventually there will be a monopoly. Initially the corporates will offer higher prices but then there will be a time when they will not.  Where will the farmers go then? At least for now, the farmers know how much they will get and if they can survive. The fear is once that happens; it will not bode well for the farmers. Open market can work in some cases, but in the Indian system, it does not work very well.”

Latest National Crimes Record Bureau data shows as many as 28 people dependent on farming die by suicide in India every day. Undoubtedly, the present mandi system needs a change. Due to price fixing or cartelisaton, farmers are exploited by the middlemen and have to depend on moneylenders to survive, which rings a death knell for the farmers.

True, reforms are needed but they cannot be brought about without consultation with people. As has been the tradition with the Modi government, it brings about changes in laws in an autocratic way and without as much as consultation with the Opposition, thus violating the Parliamentary spirit. Despite agriculture being a state subject, yet it was the centre, which pushed through the reforms.

For now, the immediate goal is to find a resolution so the farmers can go home peacefully. Moninder Singh feels that the bills were a result of a long-standing history of discrimination between Punjab and Delhi, based on culture and linguistics. “This discrimination has always been at the forefront of every movement since 1947. Whether it is the Punjabi Suba or the Khalistan movement, there seems to be an ongoing issue, which can’t be resolved by dealing with it as a one-time issue. For us, the current short-term movement is the kisan morcha along with the three farmer bills, to ensure that there is economic integrity preserved for Punjab. In the long term, it is more about sovereignty and self-determination. The fight is more about autonomy. This is just one piece for us in the larger fight going on.”

Moninder Singh denied any monetary help to the kisan (farmer) movement in India from Canada, as alleged by some sections of the Indian media. “We are not helping from the Gurdwara perspective. They said they don’t need anything. They want us to continue our protest from here and garner support. Some charities like Khalsa Aid or the Sikh awareness foundation are helping out on the ground by providing beds, tents, water and other material but not monetarily. Only thing for which the Gurdwaras here have banded together is to provide legal support, in case the protesters are arrested, then we would help support on the ground there, but that hasn’t happened. So I haven’t seen any money leaving Canada.”

As India celebrates Republic day in India on January 26th, another car rally is being planned in Vancouver on that day.  Nth rounds of talks between the farmers and government have been futile till now. It has to be seen if a cordial agreement is reached, sending the shivering farmers back to the warmth of their sweet homes.