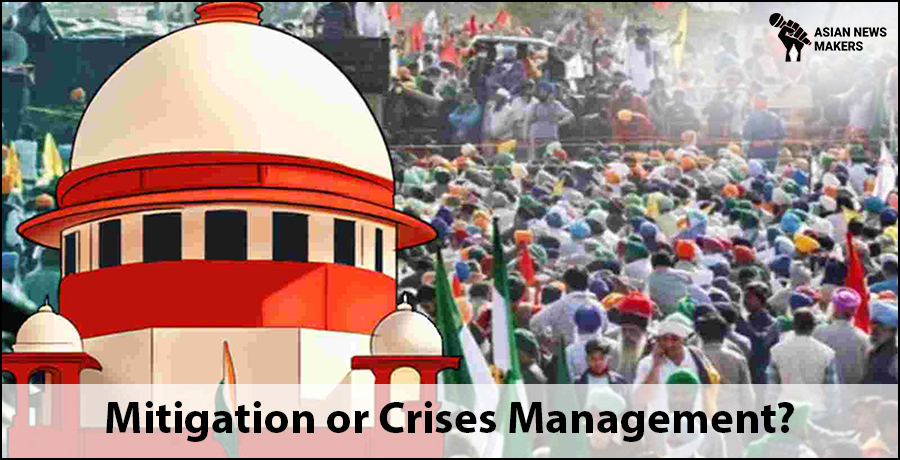 “Put Farm Laws on Hold or we Will Do It”, words of Chief Justice of India indeed must have sounded music to the ears of those who have watched the farmers protesting and dying on the Delhi borders in the freezing and chilly winter months. But does it also mean that the Supreme Court observations would soothe the farmers and placate those who demanded the repeal of three controversial farm laws?

After many months of loggerhead between the farmers and the central government it indeed was welcoming to see the apex court making an observation that government should “put farm laws on hold” and also categorically mentioning that the government was not able to handle well the farmers’ demand.

It is also important here now to understand how the government acts on the suggestions of the court to put on “hold” the farm laws as the farmers have been protesting for the total repeal of the three controversial laws. Holding and not puting a stay might complicate rather than easing out the situation.

Will it ease the stalemate between farmers and the government?

Calling the stalemate over the farm laws a, “very serious matter” the Supreme Court also said, “we have to take some action today”.

While upholding rightly the right to protest the court also raised the issue of shifting the protest to some other site.

The Supreme court judgement comes at a time when there is another round of talks between the farmers and the government due to take place on 15th of January after many rounds of failed discussion.

The doubt over the intentions of the Supreme court observations has a background to its earlier question just few days ago when it had asked the government whether the norms of Corona Virus protocols have been followed at the farmers’ protest sites.

This has been seen in the same light when the CAA and NRC protesters were abruptly forced to end their protests on the pretext of covid 19 protocols.

The Supreme Court by suggesting to put the laws on “hold” must have tried to open a window of easing out the stalemate but it also gives reasons to question. There are suggestions for setting up of a committee to look into the demands of the farmers.

The arguments goes that what extra would this Supreme Court suggested committee would do extra when the farmers and the agricultural ministry have been trying to discuss and achieve in several rounds of failed talks. Neither the government has yet given any sign of agreeing to farmers’ demands nor the farmers seem to be ready to agree to anything less than the repeal of three farm laws

In such a situation the Supreme Court intervention and observation has only benefit that it has opened up a window of fresh discussions while also opening up of a room for thaw without any concrete direction. It creates more confusion rather than a clarity.

While many across the opposition parties as well as the farmers’ body have seen this as a ploy by the court to give room to the government to gain some credibility over the issue as it had been attacked for having passed the three controversial laws in much haste even without any discussion in any house of the parliament.

Many find this observation of the Supreme Court as an opportunity for the government to pressurise the farmers to end their protest which is giving quite a bad press to the government internationally as well as pushing the government under scanner for hushing up the laws for benefitting the corporates by giving them laws friendly for the business purposes which also give the corporates a headway into a vast farm economy.

The issue of ‘farm law 2020’ between the government and the farmers had been going on since September when the laws were passed by the government. Farmers have been protesting on the borders of the capital Delhi since November end demanding a complete repeal of these laws.

While it is yet not clear if this leads to the end of agitation and protest by the farmers who have been camping on the borders of Delhi braving chilly winter months, it definitely has given some headway to a long issue between the government and the farmers.

The next couple of days are indeed crucial as the farmers’ bodies have given a call for a massive tractor rally on January 26th, the republic day of India. This is what the government wouldn’t want for sure as the farmers have made it very clear they would agree to none but the repeal of the three laws.

Biggest Victim of Covid19: None but Children
By Binny Yadav