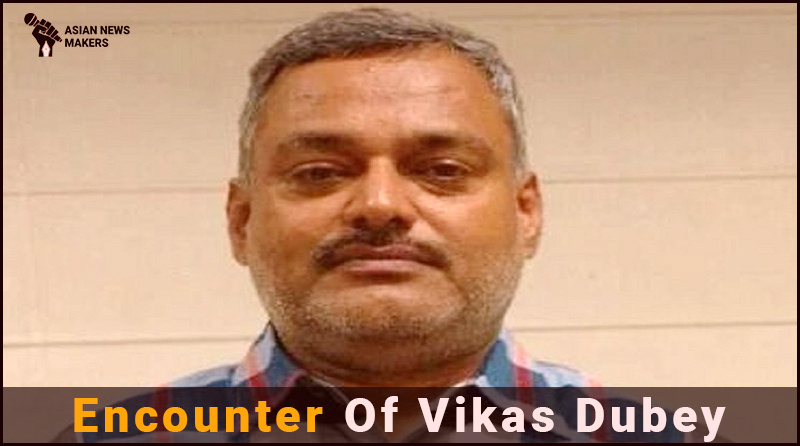 Vikas Dubey Encounter is Small Link of a Bigger Cartel

Encounter of gangster Vikas Dubey and his gang by Uttar Pradesh police has raised many questions making it one of the most controversial police actions strongly suggesting possible police-don nexus in India.

One SHO in the Kanpur region of Uttar Pradesh is already being suspected for being hand-in-glove with Dubey.

There were as many as 62 criminal cases against Vikas Dubey in Uttar Pradesh, including five cases of murder and eight cases of attempt to murder.

Some years back in Mumbai encounter specialist Daya Nayak case while throwing lights on the cops-don nexus only put the Mumbai’s elite crime branch in poor light.

In fact, Daya today enjoys celebrity status and there have been many films including legendary Nana Patekar-starrer Ab Tak Chhappan  based on life and works of Daya Nayak.

Mumbai’s encounter specialist Daya Nayak made news first in 2003 when a former journalist Ketan Tirodkar accused Daya of having links with the underworld and carrying out ‘killing spree’ at the directives of dons. Daya was alleged of amassing wealth disproportionate to his income. Nayak was investigated by the Maharashtra Control of Organised Crime Act (MCOCA) court for links with the underworld.

In 2006, Nayak was arrested during an investigation led by the Anti-Corruption Bureau (ACB) ACP Bhim Rao Ghadge. However, it was alleged that Daya was framed and in 2010 a Court quashed all the MCOCA charges against him.

Together with the Telgi scam which also threw shady lights on police roles in Maharashtra, there came a serious allegation that Daya Nayak was minting money for taking instructions from gangster Chhota Shakeel. The metropolitan cops had to look for cover!

December 1, 2003 is registered in the history of Mumbai police as the day when one of its commissioners just a day after the retirement was taken into custody.

Sharma’s arrest was in connection with the Telgi stamp paper scam. Prior to him Joint Commissioner of Police Shridhar Wagal was also held under MCOCA  (Maharashtra Control of Organised Crime Act) for aiding and abetting Abdul Karim Telgi in the running of his infamous syndicate.

There was also a fiasco with regard to the Mohd Afroz case when police applied POTA (Prevention of Terrorism Act)– apparently in haste and later withdrew the day the Atal Bihari Vajpayee government debated the new anti-terrorism law in a joint sitting of Parliament.

Political influence had bothered professionals in the police force. At one point, a former Mumbai police commissioner Rony Mendonca wrote a lengthy letter after his retirement to the Deputy Chief Minister Chhagan Bhujbal.

“…when you found I was not willing to comply with your (Bhujbal’s) wishes you resorted to posting officers directly. I was left with no choice but to voluntarily seek a shift from the post of commissioner of police,” Mendonca had written.

Of course there were scores of such cases in Gujarat specially during 2002 anti-Muslim mayhem when the cops in general sense was allegedly standing in solidarity with the ‘majority community’.

In 1998-99, National Commission for Minorities made news in embarrassing the BJP-led Vajpayee government, particularly in the context of attacks on Christians and the panel had said that in many cases police seemed to look the other way.

In the Gujarat context, a serving senior police official in Uttar Pradesh in May 2002 (during the peak of mayhem) – Vibhuti Narayan Rai – had written a letter to several police officials lamenting point blank: “not only was the police unsuccessful in containing the violence ….. but it seemed that in many places policemen were actively encouraging the rioters”.

Demand for reforms in Policing System

Experts have been demanding reforms in Indian policing system- something which has been pending for the last many decades.

In fact, it goes without saying that the police always appear to be in an adversarial relationship with the common citizens. This was a true pan-India scenario cutting across all regions and state boundaries.

The public perception of a policeman or even a policewoman is that of an intimidating, highhanded personality who puts people in illegal custody and resorts to third-degree methods.

Vibhuti Narayan Rai had written that the police failure and inaction (including in Gujarat) ought to be seen primarily “as a failure of the (police) leadership” itself.

With regard to policing history in India, in most cases, it has been found that either the state DGP would be a dedicated ‘Man Friday’ to the state Chief Minister(s) or they would have had ‘regular’ running feuds.

In the words of Mumbai-based crime lawyer and NCP leader, Majeed Memon, constitutionally a state DGP is accountable to “law and law only” and not to any Chief Minister or Deputy Chief Minister.

But this fact of the law book has seldom made a difference in independent India and wherever and whenever a few individuals were at loggerheads with political bosses and civil bureaucracy, they have been unceremoniously replaced.

Several committees and experts have recommended a fixed tenure for state DGPs so that they need not fear ‘transfer’ at the whims and fancies of the political masters.

Justice B.N. Srikrishna Commission on The Mumbai Riots of 1992-1993 Had Spoken

Rather explicitly about strong communal feelings of the men in khaki.

“The working of the Special Investigation Squad is a study in communal discrimination. The officers of the squad systematically set about implicating as many Muslims and exculpating as many Hindus as possible irrespective of whether they were innocent or guilty. Cases of many Hindus belonging to the Shiv Sena, Rashtriya Utsav Mandal (a local branch of Hindutva outfit) were wrongly classified as ‘A’ category and investigations closed,” said the report.

No wonder, various police services in the country are generally viewed as far more amenable to political control and manipulation.

It is worth mentioning here that M.N. Venkatachaliah, former Chief Justice of India and former Chairman of the National Human Rights Commission, had in one of his reports pointed out that nearly 60 percent of all arrests in India made by police were unnecessary and unjustifiable.

Has The Police System Failed?

However, it may not be fair to say that the police force or the entire system has failed.

Former Mumbai police commissioner Ronnie Mendonca had summed it up well in an interview with this scribe in 2004 that, “…..the irony remains that police also do good work. But despite having done a good job and often bringing crime rate down like in Mumbai, fighting underworld dons and averting threat perceptions for film stars, the Mumbai cops have only earned flak”.

This precisely is the story in most states if not all. Policing is certainly one of well-known thankless jobs!

Well, most of it is though not the making of cops in middle ranks. It has been rather the complicity of cops’ leadership – the elite IPS cadres – and political influences that has ultimately brought their image to such a receiving end.

(Nirendra Dev is a New Delhi-based writer and journalist and has penned books including ‘The Talking Guns: North East India’ and ‘Godhra – Journey of a Prime Minister’)