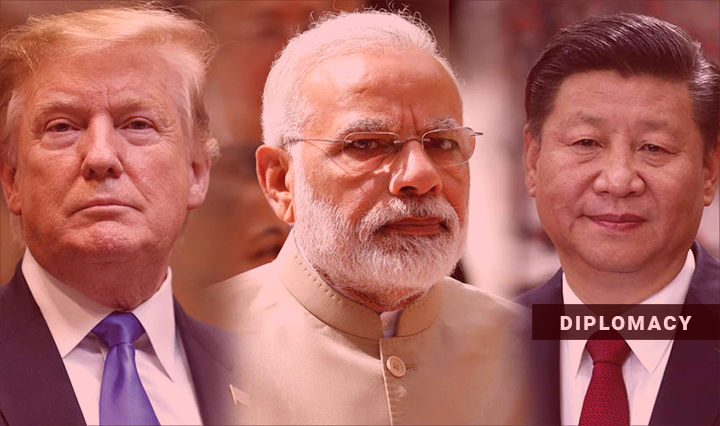 Corona virus is building a new world order. Are we heading towards a new ‘war’?

Every bad time is a good time for diplomacy they say. There are times when political compulsions push diplomacy. The wisest thing while aiming geopolitics with a mix of diplomacy is to time it right, and there is no better time for diplomacy when it is the bad time on the planet.

When the world grapples with Covid 19 only other thing which is probably flourishing most is the politics which seems to be getting more contagious than the virus. And there are no con-incidences.

Compulsions of politics are such that even the pandemics become a boon. Genesis of corona virus-which has in a way connected the world while also becoming a cause of new fault lines, it appears is also the cause of current global politicking.

Almost entire Asian region is inflicted with the pandemic but many of the political borders separating these entities are being used as a tool to reason out to the electorates which look up to the governments to meet out the challenges of life and deaths during these testing times like Covid 19.

Cause of Chinese aggression

Besides tackling corona crises, diplomacy is probably becoming a compulsive option and an extremely important playing field which needs to be watered to take on the political opponents on one side and for covering up the inefficacies of the governments on the other side. Indignation coming the China way from the world as well as voices of discontent from domestic playing feild for its alleged mishandling of corona virus seems to be guiding the Changing geopolitical and diplomatic strategies.

China is aggressive as it ever has been in its foreign policies. Because of its ‘One China Policy’, even in these difficult times it has several simultaneous fronts to settle peace at. It is not only facing world ire led by USA for alleged mishandling of corona virus, but the Chinese government has also to salvage its political stature at home to justify itself at shaky home ground. There is growing discontent even within China against the government’s policies and mismanagement of corona crises. Those who exposed the corona crises or went against the official line have faced government wrath as in case of whistle blower Dr. Li Wenliang, who was reprimanded for “spreading rumour”.

China, which is being cornered from different fronts is trying to probably adopt proactive-diplomatic postures engaging with several players at a time. While not being defiant at any front it is clearly trying to take a chance to consolidate its position at the world politics as well as in Asia while appeasing the domestic population through nationalistic rhetoric.

In Asia, China has a tough time due to the border spats with India which the experts say is not anyway going to harm the position of China, as for China it could be a routine border matters which it exploits time and again to showcase and reinstate its regional geopolitical positioning. It has been going sometime hot, sometime cold besides watering it down through statements like “China and India should not let differences shadow overall ties” by Sun Weidong, the Chinese ambassador to India.

India is keeping a measured approach vis-a-vis its reactions on Chinese border engagements are concerned but there is a strong anti-China build-up in the subcontinent, to the extent that people, through social media platforms are forwarding messages to boycott Chinese Apps.

The reference has gained momentum especially after the Indian prime minister Narendra Modi addressed the nation and reiterated for “Aatm Nirbhar Bharat” i.e  a self-reliant India. There are discussions of the revival of ‘make in India’ once again, the flagship scheme of Narendra Modi’s first term which was diluted by the end of the term and there was no mention of the scheme even in the beginning of second term of Narendra Modi.

Although Indian government is playing its diplomatic cards cautiously, it is also measuring how to use the border tussle with China and Nepal to engage its domestic population in a time when spread of corona in India seems unrestrained and people have started questioning Indian government’s efficacy in handling lockdowns which forced millions of poor labourers to take long foot journeys to their native places to escape hunger, many of whom died on the way.

High courts in India are questioning the state governments for the abysmal handling of Corona and even the Supreme Court of India took a Sue Moto stand and directed the central government to arrange the transport, safety and food for the migrants. Government of India is finding it extremely tough to save its face. It is possible that India is carefully watching the developments at the borders with China and Nepal so that the nationalist fervour can be exploited to settle the anxieties related to Covid 19 in the country.

Not a good time for border disputes

Skirmishes between India and China, inauguration of Kailash Mansarover yatra link road by India when there were even no dates announced for the annual pilgrimage triggering anti-India protests in Nepal which opened up a fresh border dispute between India and Nepal

and Nepal vouching for constitutional amendment is a matter of grave concern when there is another very important task at hands for these governments-to fight Corona virus.

Row over the disputed of ‘kalapani’ area between India and Nepal is not new but Nepal’s resolution for a constitutional amendment in this regard raises a doubt because both India and Nepal had agreed to resolve the dispute through diplomatic channels. The urgency with which Nepal is acting on this matter is not normal given a long friendly understanding between Indian and Nepal. Experts say that the border dispute between India and Nepal is not mere a two per cent of their shared borders. In this scenario is it then not easier to believe Indian Army Chief General Narawane, who indicated that Nepal is acting on behest of China. Indulgences of China in the internal politics of Nepal is any leyman’s guess.

There is the Hong Kong issue too which the USA has been using to build pressure on China. Although China has issued a very strong statement that USA’s tactics would not affect it but the sanctions which the US seems committed to put on Hong Kong would definitely change the shape of not only the businesses but also the demography of Hong Kong potentially jeopardising the future of Hong Kong.

China, for which expansionism is an inherent policy matter, it is also important to keep its boots tight for the politics at the home ground. ‘One China’ policy is a matter of emotions as well as of strong nationalism and also an important tool for the political longevity of the current Chinese regime.

By engaging with India on one side of the borders while keeping Nepal as its aid to further build pressures, China is trying to play an interesting geopolitical diplomacy. It is on one hand trying to reinstate its claim over Tibet, which would definitely please its people beside reminding the world about its traditional claim. On the other hand, standing strongly against US without getting down under the pressures which Uncle Sam is building on China through proposed sanctions on Hong Kong would send multiple signals. To the world as well as to settle the opposition and criticism at home.

Taiwan, in this line of diplomatic supremacy is pitched for higher stakes. For China ‘one nation two system’ is not only a nationalistic rhetoric but a well accomplished policy matter for which there is no bargain. United State, which is trying to legitimise Taiwan’s sovereignty by upholding its claim for the membership of WHO has definitely irked China. Popularity of Taiwan and surge in global support has majorly upset China. India too has been propagating Taiwan’s WHO membership creating an open ground for fissures which may be one of the many reasons for border build ups by China. China would not take the support to Taiwan with an ease and has even threatened Taiwan with strong action.

One, it is to tell the world that China is not yet over and out in its claim on the position of the world economic leader, second, to tell that it is not compromising on its core political stand of ‘One China’.

The United States, which too is trying to assuage its lost ground due to mishandling of corona virus is using China as a pawn. Cutting aid to WHO on one hand and consolidating the world to act against China while meddling with Hong Kong and Taiwan besides also offering India to help it in handling border dispute with China are some indications that there is politics galore to cover up the shortcomings in covid management by the US.

It is not only China or USA but many more countries are exploiting diplomacies which is not out shelved even when the prime focus of the world should be on dealing collectively with the Covid 19 pandemic.

George Floyd: In Grave Do They Speak By Asad Sultan