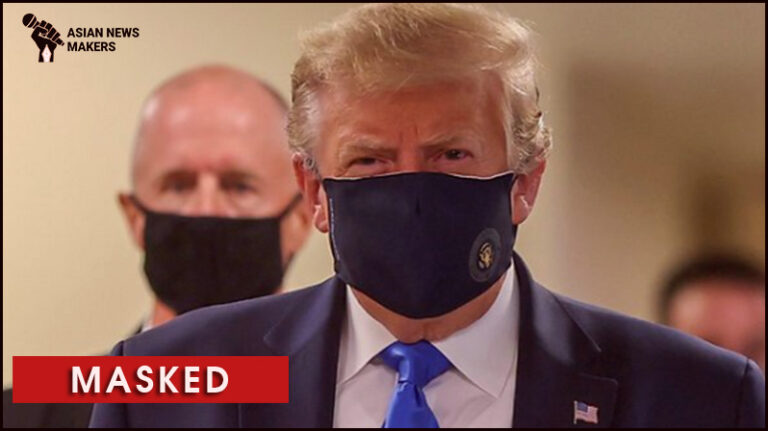 Donald Trump finally would believe Corona is ‘No Fake Virus’, but his Covid condition might cost him too high during the peak of US election proccess.

US President Donald Trump’s Covid positive report amidst the US elections was indeed shocking. While he kept fishing out his pictures regularly on social media from the hospital and kept his supporters assured about his state of “milder symptoms”, there was a raging debate over the options in the US constitution during such situations when US president, for some reasons isn’t available for the campaigning or the candidature.

Since the emergence of pandemic in March Donald Trump had not been taking the virus seriously despite more than 200,000 Americans dying of the Corona virus till September end.

President Trump had walked around without a mask and so did his aides and employees of the White House. Just before President Trump and Lady Melania, were diagnosed, one of their closest aides Hope Hicks, who had travelled with Trump on his campaigning trail to a hectic campaigning schedule to Minnesota, Pennsylvania, Virginia, Georgia, Florida and North Carolina in just one week, had tested positive on Thursday but had remained silent on her condition. After Trump many among White House employees were hit with the virus.

The same week he tested positive President Trump had ridiculed Presidential Democratic Candidate Joe Biden during a hot presidential debate, for wearing a big mask that covered his whole face. “Every time you see him, he’s got a mask. He could be speaking 200 feet away from them, and he shows up with the biggest mask I’ve ever seen,” Trump mocked Biden during Tuesday’s presidential debate at Cleveland, Ohio.

Undoubtedly, Biden had been appearing in public with a mask on, limiting the number of people he campaigned with, who too were masked and maintained social distance, a rule Trump always violated. Despite restrictions, Trump held a rally in Virginia attended by thousands of people on September 25.

Trump had boasted that his rallies, which have been attended by 35-40,000 people, have had no fallout. Unfortunately, none of the statements had been true. Trump had always claimed masks are for suckers and never promoted it, despite his medical officials pleading with Americans to wear masks. Trump coming down with a virus he had always termed as China virus, is a symbol of his own failure at controlling the virus.

Just days before the elections when the incumbent president tests covid positive and not available for campaigning, Americans wonder what next? According to the Twenty-Fifth Amendment to the U.S. Constitution, section 1 says in case of the removal of the president from office or of his death or resignation, the vice president shall become president.

So, if President Trump becomes incapacitated, he should temporarily transfer power to Mike Pence, who has tested negative for COVID-19. The president can regain his powers once he is ready to discharge his duties. And if an unfortunate situation occurs where the Vice-President becomes sick, the Constitution would then allow the Speaker of the House of Representatives or Nancy Pelosi to act as the President.

While the 20th and 25th Amendment makes it clear for President Transfer power to Vice President when in power, the rules are very ambiguous in case a president is totally incapacitated and not able to work at all, during a campaign, though we don’t wish that for Trump. Parties should have their own rules to replace a candidate and in case of Republican Party, the rulebook puts that decision to a vote of national committee members. Undoubtedly, just a month before the election, it would be a monumental task for the electoral body to reprint ballots with the names of all candidates running in national, state and local elections. The parties can try to replace the candidate when the electoral body is formed every four years for electing president and vice-president. It is the still the party’s responsibility to provide an alternate candidate in case the winning candidate dies.

In the history of America, no presidential candidate or president-elect has ever succumbed or withdrawn before a presidential election. If anything of the sort happens in 2020, it certainly would be unprecedented and so would be the experience in case anything of the sort happens. Right now, officials say Trump was brought to hospital as a precautionary measure, though details of his vitals are not available, as White House officials are keeping his condition under wraps while Americans rush to trace his timeline in the last week, so those who had come in contact should be tested.

It cannot be denied that Trump’s weight 245-275 lb and his age, is against him, yet the 74-year old has been relatively healthy except for his cholesterol and lack of exercise. Many presidents before him have not been very forthcoming about their medical conditions. Eisenhower never made public his heart attack, which he had in 1955, and a stroke in 1957. John F Kennedy never spoke about his health problems including Addison’s disease and tons of medicines he took while negotiating sensitive international treaties. Richard Nixon suffered from serious mental issues during the final days of his Presidency while Ronald Reagan never divulged his multiple cancer surgeries and Alzheimer’s disease.

Covid is the Focus in US Election

As of now, no one knows how Trump’s quarantine will affect the elections but what is certain is that despite the President’s attempts to divert the issue of his mishandling COVID, the virus is now the focal point of all debates. While his party men hope that he will emerge from the hospital stronger, his opponents worry about the sympathy votes that he might garner.

The next presidential debates scheduled for Oct 15, is now in limbo. Advance voting is already underway in a few states and as much as two million Americans have already cast ballots. The ballots would have to be changed if anything happens to Trump, experts say. Not only the pandemic, but American democracy has been plagued by civil unrest, partisan distrust and the Black Life Matter moment along with certain Republican controlled states where people have been defying basic COVID precautionary measures of wearing masks and social distancing, of course led by Trump. It has now been proved that the virus does not care about political ideology or social status. It can affect anyone and anywhere. No one, no matter how powerful or powerless, is immune to it. Precaution is warranted, has been proved.

Challenges of campaigning for Trump

It seems highly unlikely Democrat presidential candidate Joe Biden will suspend activities while the president is recuperating, but his campaign might be re-evaluated. Unfortunately for Trump his campaign manager Bill Stepien, too has tested positive for the virus, thus pushing Trump’s political campaign haywire and he will even have to bring his remote campaigning to either a stop or slow down. As of now, Trump’s rating has been falling and his absence is bound to further tip the balance. Finally, President Donald Trump will believe that the virus, which has killed more than a million people around the world, is serious and not fake news, as he had wanted Americans to believe.