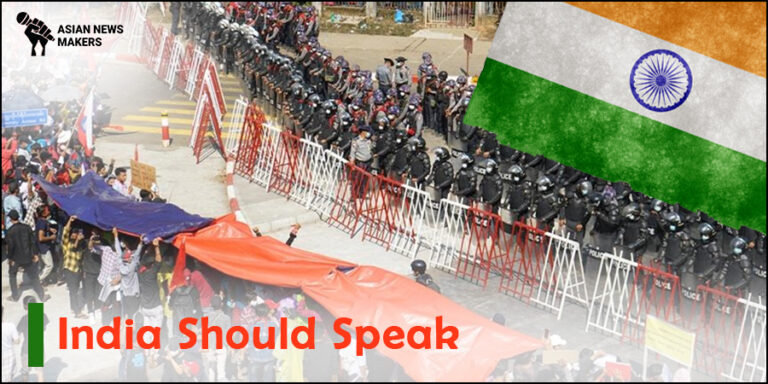 Pictures of resolute and dying protestors of Myanmar coup d’etat are getting bigger each passing day. Despite multiple deaths pro-democracy protesters are adding up in numbers in tens of thousands across Myanmar despite an escalating crackdown, raids and targeting of activists. Is there any way out close to us where the leading democratic institutions stand up and choose between the democracy or the dictatorship?

The question raised and addressed here is reaction against, and the role of India in the serious political developments in its neighbourhood, which will determine India’s standing in the current international political scenario.

Good or bad, despite the recent momentary setback in US democracy with the storming of Capitol Hill, it is the leading country in defending democracy. The National Security Advisor of US, Jake Sulivan issued a strongly-worded statement on the military crackdown, “ We will continue coordinating closely with allies and partners in the Indo-Pacific region and around the world to hold those responsible for violence to account and to reinforce our support for the people of Myanmar”.  He warned further, “to that end, we are preparing additional actions to impose further costs on those responsible for this latest outbreak of violence and the recent coup”.

The Indian reaction, as perhaps expected, came in a subdued tone from its Embassy in Yangon. It said, “It is deeply saddened by the loss of lives in Yangon and other cities of Myanmar as the police fired on the protesters”. It urged all stakeholders, “to exercise restrains and resolve issues through dialogue in a peaceful manner”.

Is the Indian reaction adequate? Furthermore, is India taking any initiative, or should it, to resolve the democratic tangle in Myanmar, which is strategically as well as politically important for India? To be sure, India has a greater responsibility as well as concern over the developments in Myanmar-to assert its international persona and to thwart Chinese incursion into Myanmar politics.

On India’s role and reaction, it has been traditionally straddling two horses at the same time in Myanmar, supporting democracy movement as well as doing business with military junta. New Delhi has been explaining it away in terms of a pragmatic approach to prevent Myanmar from drifting into either a civil war or into Chinese influence. Both possibilities are neither in the interest of the people of Myanmar nor that of New Delhi.

The fresh perspective coming from the diplomatic circles is to adopt a two-track approach: one, to be pursued by the government and the other taken by the non-state actors. The government will have to deal with the military as the instability in Myanmar might trigger support for insurgency in the North-East. Further, India’s development projects should not be derailed by the internal problems of the country. On the second track, political parties, civil society, media, universities and citizens are all free to back the pro-democracy movement. Such approach might assuage to the democratic world. But will it serve India’s long-term interest?

Dilemma of choosing between democracy, autocracy or dictatorship

Scanning the international political scenario, one comes to a realisation that the current politics consists of a conflict between democracy and autocracy or dictatorship. After the Cold War, which was marked by a contest between military capabilities of two super powers, came a phase of competition for economic and technological superiority under globalisation. One super power namely the USSR declined and disintegrated in this competition for superiority. As the economy became the determining variable, China emerged as a world power being the second largest economy. Beijing replaced Moscow as the alternative centre of power to Washington.

With the rise of China came a new threat of autocracy to the democratic world. China represents rapid rise in economic growth, technological power and trade competence. At the same time, it is also infamous for denial of civil liberties, human rights and defiance of a rule-based order. The emergence of China has thus thrown the world into a debate on efficacy of democracy and autocracy.

Admittedly, democracy is slow, could be messy and complicated. In contrast, autocracy could be more efficient, decisive and fast. In political theory, the authors and observers are compelled to take note of this current debate as evidenced by the latest book by Mathew Kroenig, “The Return of Great Power Rivalry: Democracy Vs Autocracy from the Ancient World to the US and China”. This book discusses, from ancient history upto the present time, the comparative advantages of collective action and wisdom expressed in democratic terms and those of autocratic and dictatorial forces.

The conclusion in the book and the universal understanding point out that democracy is, any day, better than autocracy. The former political format gives opportunity to the citizens to self correct and to be able to conduct their lives as they wish. Autocracy may give material security but kills dignity, self respect and freedom of choice and action.

Secondly, democracy is led by United States, Europe, India, Japan, South Korea and Israel etc. The autocracy is led by China and Russia. China also happens to be a threat and an adversary to India. Therefore, both philosophically and strategically India is on the side of democracy. Because of its size and perseverance, India is known to be the largest democracy in the world. In the long-term interest, and in its current conflict with China, democracy becomes handy for India. At the cost of temporary dividends, New Delhi needs to defend democracy anywhere in the world and certainly in its neighbourhood – Nepal, Afghanistan and Myanmar, which are facing a serious democratic test.

It is high time that New Delhi sheds its hesitation, speaks from the roof top about its solid democratic fundamentals and credentials and shouts for preservation of democracy. It should take a pro-active role in Myanmar in restoration of democracy either through dialogue or through collective international pressure. Action on Myanmar is urgent and indispensable. This is indeed a historic moment for New Delhi to take a call on democracy. A momentous decision taken by New Delhi now will feed its aspiration for being a world power. The ball is in our court.

To recall, on the 1st of February, the Myanmar military (Tatmadaw) took over the administration in a coup against the fragile democracy, arrested President Myint and the State Counsellor Aung Saan Suu Kyi. This was an illegal action taken on the superficial grounds of non-transparency in the last general elections in which the military backed Union Solidarity and Development Party lost. This resulted in protests across the country mutating into a Civil Disobedience Movement (CDM).

The ‘supreme leader’ of National League for Democracy, the noble peace laureate Suu Kyi was initially charged with illegally keeping six walky talky radios, and for violating natural disaster law by breaching the Covid protocols. On Monday, she was slapped with two more charges; one, under a section of colonial-era penal code barring publications of information that may cause fear or harm, and second, under Telecommunications law for possessing unlicensed equipment. This shows the brazen attempt of the military to desperately draw some legitimacy for their action.