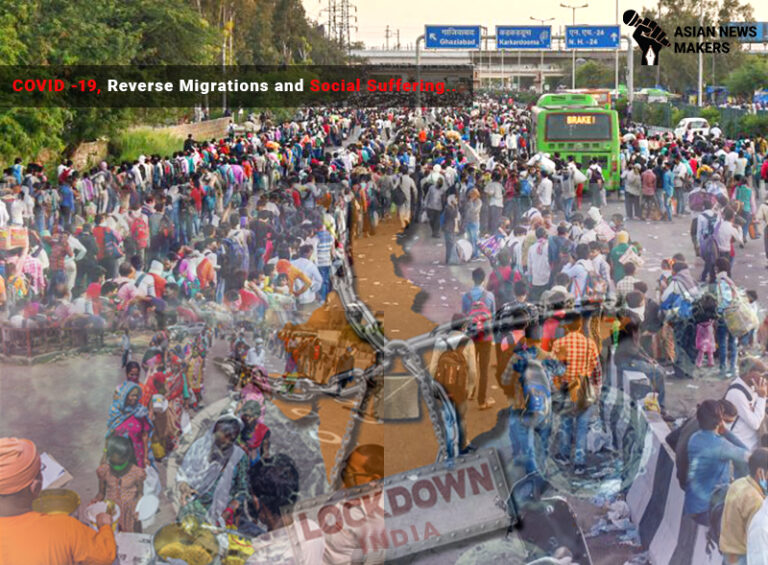 Ghaziabad: Migrants board a bus to their native villages during a nationwide lockdown, imposed in the wake of coronavirus pandemic at Kaushambi, in Ghaziabad, Saturday, March 28, 2020. (PTI Photo/Manvender Vashist) (PTI28-03-2020_000284B)
Share
Facebook Twitter LinkedIn Pinterest Email

COVID-19 outbreak has brought with it a significant and an enforced change of lifestyle.  In varying extents, lockdowns and the ensuing repercussions they carry including restrictions of movement and social interactions can be considered as a common socio-political feature that has accompanied pandemics such as Russian Flu, Spanish Flu, Asian flu, Swine Flu, SARS, and Ebola.

HIV/AIDS remains a contested category as some call it as a Global Epidemic, while others consider it as a Pandemic. COVID-19 has attained a clear Pandemic status. One of most effective ways to check the spread of the Novel Corona Virus is perhaps no different than the preventive strategies of yesteryear pandemics and global epidemics, though their impacts vary from place to place and the times these occur in.

Death and distress caused by contagious and infectious diseases is not only significantly challenging for society and governments, but is also known to have altered the course of history: Cholera, Influenza, Black Death (also known as The Plague) are just a few examples.

What holds my attention today is the COVID-19 triggered Reverse Migration in India?  National Lockdown 3.0 has allowed restricted movement of labour from cities and urban contexts where the daily wagers and migrants workers have been trapped in.

As cities witness lakhs of these forced hostages and stranded labour commencing arduous journeys back home, -lock, stock and barrel, – after weeks of facing hunger, death and distress in urban India, a relevant question  to ask is:

A lockdown mode of protest was slow in coming and not obviously palpable. It took time, but as soon as Indian cities fended for themselves and understood what it meant to be confined at home under an ill-planned lockdown, they found their voice. COVID-19 Lockdowns saw most of urban India pensive, sad and outraged at the plight of the labour. Certainly, there are exceptions. For many a decadent family and entrenched elite, the fate of the workers was never any criterion to judge the State or undertake charity.

Philanthropists and humanitarians reeled under shock waves and outrage. Neighbourhood- groups were loathe, almost out of an ethos of a guilty silence,  to see their cities turning into sites of mass hunger, pennilessness and rejection faced by the desperate migrant workers craving to return to their villages and hometowns.

Locked down and unable to solve their misery despite valiant attempts to walk the miles, the daily wagers and their languishing kith and kin living with them began to be supported by urban families, networks as other well as civil society efforts.

Whether and to which extent, the governments, big businesses and corporate pay their employees or not, a resounding majority of locked down urban India decided to support their staff, workers and domestic helps even though National lockdowns 1.0 and 2.0  prevented them from reporting to work.

Below I examine the  three inter-twined stages of piety and protest that urban India has entered into,  while bearing in its midst and being a party to,- the suffering, the courage and grit of stranded and hungry migrant workers, – aspiring to go back home.

Stage I Evolving  concerns: villages without work, wages and welfare

Individuals and groups in cities started networking to collect and deliver food, money, clothes and other necessities regularly that National Lockdown 1.0 and National Lockdown 2.0 conveniently forgot to think about and later, implemented in a confused, haphazard and selective way.

Common people, civil society and voluntary organisations in the cities began donating to the best of their abilities to fill the gap between words and deeds of the powers that be. Locked down indeed, but certainly there was seldom a moment when the cities lacked momentum to sift through the pandemic Dos and Don’ts and arrive at an inspirational goodness towards the suffering and the needy.

Hidden behind such efforts lies urban India’s concern for the Indian village, now being articulated around two fundamental questions to the State and society:

Stage II   Resident Welfare Associations (RWAs) in Cities: from vigilantism and stigma to a politics of care and concern

National Lockdown 1.0 in India was sudden and scary. Announced as it was amidst lack of a clear national policy, perspective or fool-proof welfare package, it threw the citizens into a flux. As soon as the people got their bearings together, systems were put firmly in place, after sincere trials and errors, for reaching out and catering to the urgent and the exigent needs of society.

Resident Welfare Associations rose to the occasion after hesitation, bitter debates and strict adherence to successive lockdowns, which at times became a bit too controlling and disconcerting or discriminatory. It was not uncommon to read stories and hear about Resident Welfare Associations (RWAs) entering into Vigilantism against those who had returned from aboard and/ or were in high risk of exposure to the dreaded Novel Cornona  Viurs, the COVID-19. For, instance pilots and air-hostesses or families who travelled out of India and/ or whose children returned home from their respective universities abroad faced stigma, suspicion and harsh reactions.

Generally every locality in the cities in India, whether composed of independent houses, flats or gated communities, counts on active RWAs, -formal or otherwise. These RWAs began holding meetings and discussing the rules that would govern their housing societies or independent residential areas during the National Lockdowns and COVID-19 related emergency situations.

By National Lockdown 2.0, things turned around.  As RWAs and other citizen bodies tapped into a collective political imagination, tempers eased. While a keen vigilance started replacing the earlier Vigilantism of the RWAs, mechanisms were evolved to monitor suspect and quarantined cases in residential areas as well as reach out to the needy and stranded workers in their vicinities.

People have raised voice through social media to reach out to each other in a bid to document and remedy the stark injustice, hunger, suffering of the poor workers and the quintessential have-nots, in the most feasible manner. Online articles, video snippets, video conferencing with Zoom and as well as audio-visual analysis on Facebook, Twitter, Whatsapp and what have you!

Discussion forums, messages across families and friends, debates and more analysis through sharing of chats, data, photos, paintings, posters, music , poetry and parody not exclusive of macabre jokes and jibes at the State. On the one hand, urban India became a witness to hunger, homelessness and impoverishment and on the other, social media emerged as its site of protest.

Repulsion and piety emerged as the twin driving forces behind the voice of India and the following questions have been asked across different forums and through the employment of different genres of communication:

Zeroing in on the Beneficiary-A daunting task

Yet others do not even possess cards such as Adhaar IDs pertaining to the cities they work in and remain unregistered as labour/worker and hence pertain to the unorganized sector. The ensuing struggle for food and provisions in National Lockdown 1.0 and Lockdown 2.0 demonstrated haplessness of the suffering lot while laying the cluelessness of the ill-prepared state, threadbare.

Many a slip between the cup and the lip

Inordinate Delays in safe return of Workers and their families

With the third National Lockdown commencing from the first week of May 2020, the Indian state has given a go-ahead for reverse migration- lock, stock and barrel. Migrants are now officially allowed return home using public transport.

Shortage of doctors, medical staff, testing facilities and medicine in the villages

Funds, funds everywhere but none to spare for the heartbreaking journeys back home

The seventh question that I have stated above raised a twitter storm in India on May 4, 2020 and resulted in widespread political bickering and confusion. Even though a prominent political party asked the question of fares to another prominent one in India, the subsequent political spat does not fully explain the drama around the question of travel- fares chargeable on return migrants.

This question has been asked from the thresholds of many quarters beforehand. In light of current developments whereby the Centre belatedly offered to pay 85 percent of the travel fare asking finance-starved states to pay the balance, the sequel to question seven is as follows:

Analysts, experts, journalists and ordinary individuals worried about the situation will continue to ask such questions that may trouble India for long times to come. Some such queries will remain unanswered. Others will form the basis of future research or even become the ground for socio-political transitions triggered by the COVID-19 times in India.

Indians, whether in cities, towns or villages are coming together to think ahead

By thinking about and engaging in actual care of the disillusioned and hungry migrant-labour, urban India is probably undergoing a cathartic, much needed humanitarianism amidst the rising dangers and ironies of the Novel Corona Virus pandemic.

Citizens all over India are outraged at the ill-planned exodus and are moved by a spirit of piety towards the village.

Urban India is far from heartless.