India and US Reinforce Commitment for Afghan… 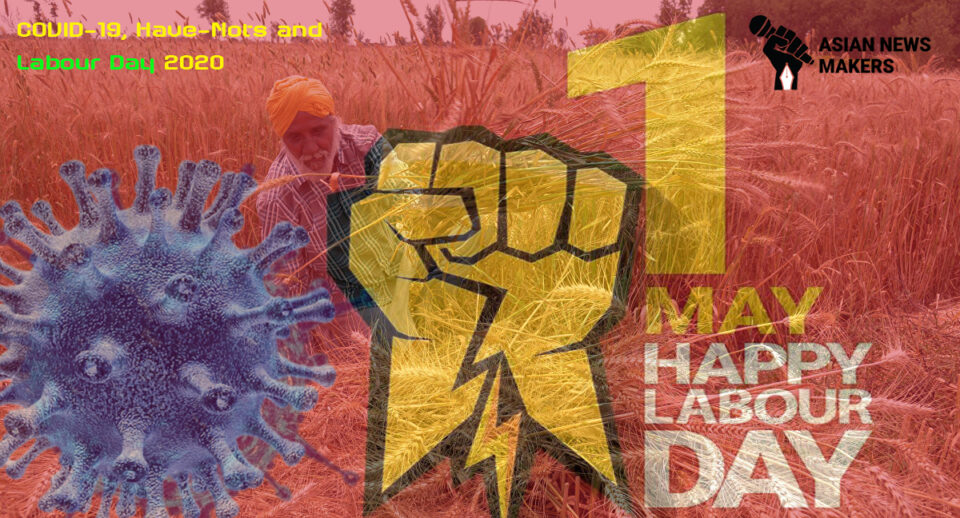 Of Corona, COVID-19 as a double edged sword and a ‘relative’ disaster

Is the Covid-19 pandemic drawing our attention towards and juxtaposing the historical meanings of the term, ‘May Day’ to its political connotations..?  Can the relationship between nature, history, politics and the International Labour Day help us think in newer ways of our contemporary World..?

A tree alone, they say cannot make a forest. Yet often times it is one or some of those treacherous trees that block out the entire forest for us. How ironic and how powerful a tree is and can be is fully understood when we consider the history of life, hard work and the dignity of labour.

Corona Virus COVID-19 makes us humans sick but heals our trees, forests, river and nature. It reveals to us, the vast and magnanimous forest of life laden with values of simple living and high thinking, sustainable aesthetics, hard work, rest and care. The deadly new Corona virus, the COVID-19 is repulsively degenerative while being attractively healing. It is a double- edged sword which shines and performs, rather illuminates just as much as it darkens. But then, what isn’t multiple, evolving and transitioning in its ramifications?

Did Einstein not give us the theory of relativity, in an effort to illustrate how different perspectives of the same physical events and occurrences may lead to a more holistic understanding of them and related phenomena? Are good and bad times not relative, literally and figuratively? What about happiness and sorrow? Do not times of disease, pandemics and epidemics help us see what/ how desirable wellness under, ‘normal’ circumstances is and can be? Not being able to work for a living, being confined, gagged, exploited and encumbered makes us gauge even more beautifully what it means to be able to earn, enjoy, move around, express and be free.

Till last year, many would rejoice and celebrate May 1 as a holiday. Those for whom it had actual meanings would love to recall the discursive values and meanings that May Day or May 1, as International Workers Day constituted.

For those who respect the dignity of their own and other peoples’ labour, the May Day 2020 still remains beautiful. Not to forget, the origins of the term remind us of Spring and the aura of hope it brings after dark, dreary winters. In ancient and medieval Europe May I was celebrated as a festival to honour and enjoy the return of Spring.

Probably originating in ancient agricultural rituals, the Spring Day festival was said to be popular among the Greeks and Romans. Later celebrations of Spring moved on to gathering wildflowers and green branches. The weaving of floral garlands accompanied by the crowning of a May king and queen, and the setting up of a decorated May tree, or Maypole, around which people danced became the later rituals that appended themselves to the transitioning ancient practices.  Such rites  may have been considered as harbingers of  fertility for crops and, by extension, for livestock and humans.  However, gradually and in most cases this significance dwindled, so that the practices survived largely as popular festivities.

In the 20th century, traditional May Day celebrations declined in many countries as May 1 became associated with the international holiday honouring workers and the labour movements the world over, with the exception of a few countries that have assigned different days for the same.

In the 19th century and during industrial revolutions in different parts of the World, industrialists and capitalists all over the world exploited the labour class and made them work up to 15 hours a day or even more. The workers showed courage and stood up against this exploitation including dismal working conditions, leading to movements the world over for the recognition of the dignity of labour. A traditional labour union movement is an eight-hour day movement, which calls for implementing eight hours of work, eight hours of recreation and eight hours of rest.

In commemoration of the achievements of the working class, Labour Day or International Workers’ Day is observed each year on the first day of May. The day, also called as ‘May Day’, is observed as a public holiday in many countries In India, the first Labour Day was celebrated on May 1, 1923. Depending upon their regional language Indians also call it as, Antarrashtriya Shramik Diwas (International Labour Day). The day is known as “Kamgar Din“ in Hindi, “Karmikara Dinacharane” in Kannada, “Karmika Dinotsavam” in Telugu, “Kamgar Divas” in Marathi, “Uzhaipalar Dhinam” in Tamil, “Thozhilaali Dinam” in Malayalam and “Shromik Dibosh” in Bengali.

As we stand face to face with the Corona Virus Pandemic of 2020 and National Lockdowns in India and elsewhere, the daily wagers and the poorest of the poor among the working class suffer the worst fate. May Day 2020 comes at a time when dignity of labour, especially in the unorganized sectors, has become the easiest to sacrifice.  Time seem to have metamorphosed into a disempowering state whereby in face of no work, the workers have no pay and obviously, are unable to enjoy any recreation as their very existences stand endangered.

COVID-19 Pandemic affords no work, no income, and no leisure to the have-nots on May Day this year, almost coming close to meanings of a similar sounding term, which is employed as a distress call: Mayday. It seems that we have reversed the gains that the working class movements proposed for the toiling men and women they stood up for. How do we bring ourselves any hope whatsoever, this Labour Day of the year 2020..?

On Commemorating the International Labour Day 2020

Well friends, how to do we even begin to do this? Commemorate a labour day in a period when neither Spring nor a proletarian ethos seems real..?

It’s a time when all working classes have been hit the hardest.  For instance the case of migrant labour in India, unregistered construction workers and other daily wagers demonstrates the negligently brutal and unplanned side of national lockdowns.

Nonethless, this year’s  Labour Day or May 1,  2020  takes us back compellingly  to  both the historical origins behind the idea associated with medieval European Spring rituals as well as the conceptions on dignity of labour that have defined May Day  since the 20th Century .

COVID-19 pandemic  is a grim reminder of how efforts that respect the  rights and dignity of, – labour/workers, also known as the have-nots in Marxian literature, – need the quintessential joy and security of a political Spring where humanitarians concerns do not shun the very hands that sustain us, endowing and sanitizing  the very foundations of our society.

The May Day 2020 tells us of the need to invest in and fortify the positions of, as Anthropologists would say, the everyday actor who makes it possible for  us  to remain fed and clothed, educated and humane, industrious, diligent and healthy under the four walls of our houses. Farmers, Industrial workers, artisans, domestic helps and workers of all kinds, in the organised as much as the unorganized sectors cannot be pushed into vulnerable existences and left bereft of social and administrative support.

Lockdowns do not justify brutality or pulling back of fundamental socio-economic and political rights and basic conditions of living. They are no excuse for imposing misery and lack of health care on society, especially among the most needy. Lockdowns fail to convince us on state negligence.  They are no way going to seduce us into the traps of an empty propaganda.

Where is the wealth that our hands and minds have produced for the states generation after generation?  We ask because we need to put our respective national resources to use: The states earn just as much from taxes and ill-begotten wealth as the private players hoard from whopping industrial and corporate profits. We, the people deserve answers and solutions to our questions, both during and in the post-COVID 19 times.  We want to raise our voice to commemorate humanity, peace, justice, animal-human-nature harmonies and a holistic re-making and the well-being of our worlds.

Another world is possible

The Cornona Virus pandemic inspires us to look back on the idea as well as the politics of work and dignity of labour with a new light this year, May 1 2020. May Day 2020 comes to us with a beautiful message which almost encodes a plan of action within it:

Another world is definitely possible. But no World is possible or sustainable without granting the working bodies and souls, the hard earned dignity of their labour, especially in times of distress. It is time for the State and society to give back.

Dr. Bobby Luthra Sinha works as Senior Vice-President, Research at the Osianama Learning Experience (OLE), Delhi; Executive Committee Member (Hon.), International Commission of Migration at the International Union for Anthropological and Ethnological Sciences(IUAES); Deputy Director (Hon.), Centre for Asian, African and Latin American Studies (CALAAS) at the Institute of Social Sciences (ISS), Delhi. She is an independent social scientist and a writer who is passionate about inter-disciplinary researches, including documentary making, on issues pertaining to Anthropology, Political Science, Environmental studies, Migration and Art.

An Ode to Democracy in India

India and China: Bargaining Tough For Peace By Nirendra Dev

Shape of Litigation During Covid 19