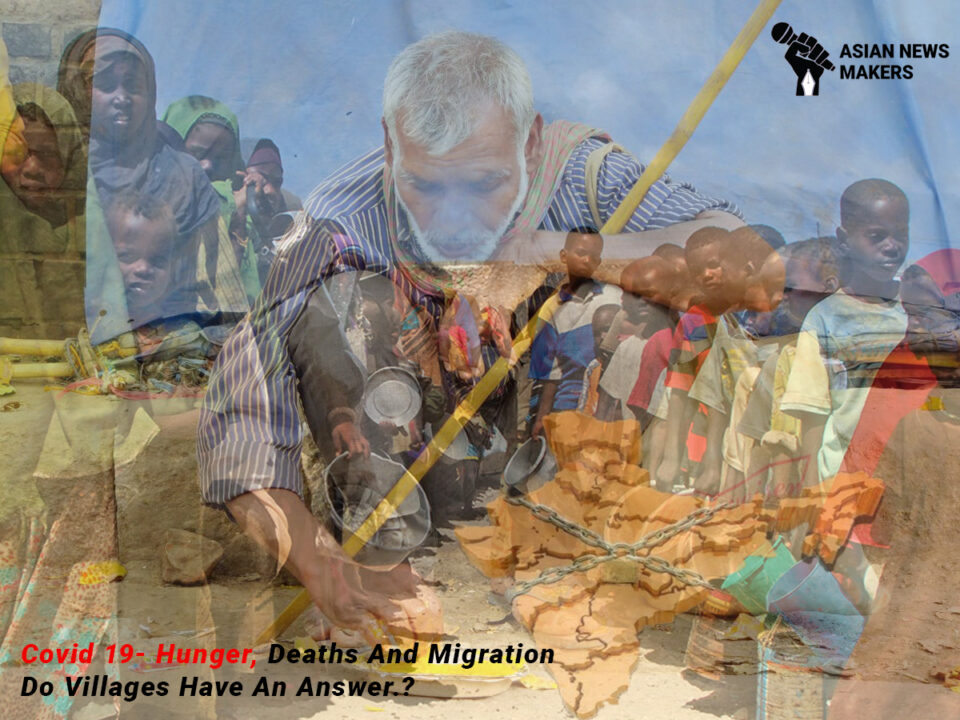 Corona crises and Lockdown in India exposed those covered up wounds which were lying untreated and unattended under the weight of development goals of urban economies of the developing world. Pictures of hungry migrants marching from their city of dreams, holding hands of their toddlers and carrying whatever little they owned on their head and backpacks have become the face of COVID-19 for the future documentation. For Corona virus-stricken world the pictures of hungry, destitute and homeless people on the roads have exposed how the talks of development and filling up gaps between urban and rural economy have been nothing but a sham.

During height of Corona crises When families and people were supposed to quarantine and observe lockdowns, the march of migrant workers back to their villages from cities to counter death due to corona has presented to the world how developing economies have been trying to achieve a place parallel to the grown up worlds by brushing aside and overlooking the micro economies which form a crucial basis of larger and macro economies of developing worlds. It has also exposed how the developing world is being driven and pushed to follow the development model created by the developed world.

March of migrants towards their village leaving the national capitals and business centres have reflected that these metros have failed to secure the very labour force which has been the basis of their development model.  Migrant crises during

COVID 19 has also exposed how South Asian countries which have the advantage of a magnitude of their labour force have neglected rather than empowering them to use this force in order to achieve the development goals. 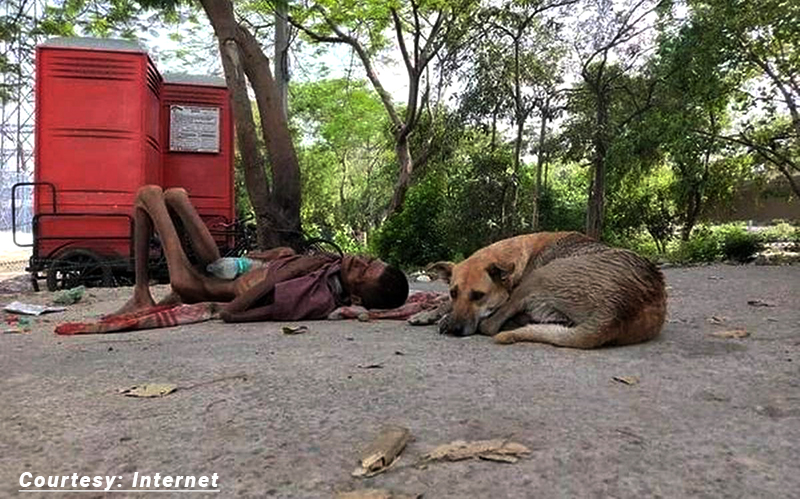 Destitute and homeless Manoj, is another face of COVID-19 and represent millions of those hidden, homeless and poverty stricken migrants who are lost in the charm of big-city development models. Manoj was almost dead when he was spotted lying on road by an NGO representative in Delhi in last week of April,2020 and could just utter “water” through his deep breathing.

He belonged to a poor northern state of Bihar in India and was suffering from Tuberculosis. He died few days later and could not survive to meet his family again. He came to the city to get himself treated and through him the Delhi administration got to know about hundreds of those unknown migrants who were living in the vicinity and many of them suffering from deadly tuberculosis and were stuck due to lockdown.

What is common between migrant labourers who chose to march back hundreds of miles to their villages, risking their lives, rather than stay put in cities during lockdowns and Manoj, who died lonely and hopelessly due to a deadly and contagious disease other than Corona? All of these came to the cities not for the home or the food but with a hope and a dream.

Hope of earning a better livelihood and dreaming of the facilities like health and education which have alluded villages of developing countries and have largely remained restricted to metros. These migrants, homeless and destitute people remain hidden beneath the dark basements of skyscrapers of development models. They keep surviving amidst the dreams and fantasies of city life which never adopts them as one of their own.

When the world locked itself down due to fear of corona virus they also shut their doors to these poor migrants and these poor were left with no where to look to other then their villages which at least had their home to shelter them and a family which is their comfort zone and their own people who will not let them die of hunger. In one stroke the dream of city was struck down and these migrants felt deserted, betrayed and abandoned.

India accounts for around 5.5 million women and 22 million males with the addition of 13 million such workforce every year to its organised labour pool. More than 82 per cent of the total work force in India is employed in unorganised sector as noted by the International Labour union.

Majority of this workforce is employed in the development works in metros and cities and migrate to the cities leaving behind their native villages. Most of these migrant workers depend upon the contractors or middle men for their source of work and rest who are employed as skilled workers in factories are a large chunk of those who come to the cities and get dissolved between the layers of unaccounted, unacknowledged and largely unorganised factories which work under inhuman and illegal work models.

As the city life crumbled during lockdowns due to COVID 19 this was the very work force which works under and through an unstructured and unorganised model was the first one to be deserted and it had no one to look forward to. They live in shanties under minimal and inhuman structural units with only comforts of their community members and sometime families around them.

They never think of making cities their homes and considers it only as a means of money and livelihood which they lack in villages. The city never become their home nor does the city adopt them as their own people. There is this symbiotic relationship through which the city and this migrant workforce had been surviving with each other for ages. During sudden lockdowns this basic cord of relationship between migrant workers and the city suddenly and ruthlessly broke down.

Suddenly these workers realised that the city which they had been building up has shunned them when they needed a humanitarian hand. Suddenly their hope of livelihood from this city was shattered and similarly the dream for which they came to the city was broken and a pseudo comfort which they were happy to find in the city turned them away on the roads with no choice to look back to the place they had left behind, their villages which was waiting for them with their home and families.

Lockdown took away their shelters as they had no money for the rents. Hunger and lack of political outreach forced these workers who till now held and supported the urban economies as its backbone to lurch on road and beg for the very basics like bread and water.

This was the moment when this trust was broken between the migrants and the city of their dreams and they were left with no choices but to choose a dreaded and painful journey towards their homes in villages and towns mile and miles away on foot with no food and water amidst lots of uncertainties. They Carried back nothing but the hope for life back home as the city they came chasing their livelihood and dreams had crumbled at one stroke and its shallowness could not support those who supported the cities.

Was it just the betrayal from the city and the system that pushed these migrants back to their villages? Indian villages always had a significantly interesting social and economic structures. In fact every South Asian country thrives on this unique model of parallel rural and urban economy. These are largely farm based economies which supports urban economies not only through food but also through work force. Rural economies are more or less independent but urban economies cannot survive without the help from the rural economic support system.

Rural economies may not be able to support the cash flow for its dwellers but it is self-sustaining in many sense which at least provides a social support system form of community support and brotherhood. The other important aspect of rural economy is that there is no one without a roof of their own and everyone has basics like food and water.

Other important aspect is that the village economies still work on the ancient social structure which more or less thrive on the local produce for community consumption and there is little dependence on the outstation supplies for basic food requirements. Only things which are short are the facilities like health, education and security of money. Village dwellers expect these securities from city and when even the city cannot guarantee them and secure them of the basics they have at least one place where they are sure they will not die hungry or homeless and that is their village.

Road Ahead after CORONA..?

CORONA crises will not end soon but the life has to go on and economy is being kickstarted slowly and gradually but ironically there is no stopping of this reverse march of migrants towards their villages. They are not shying away to take long journey even though the governments are assuring them the food and shelter and also there are efforts to ensure work and livelihood.

What is pushing these workers for reverse migration with a vouch never to return back? What will happen to the urban economies and the development works if these workers and labour decides never to return back? How will they survive in rural set up which still lacks the infrastructure which they demanded from cities? One thing is sure that after facing hunger and near-death situations during lockdown periods when they struggled to get even very basic food for daily survival there is a strong sense of betrayal by the city administration.

It is extremely important to build back the lost trust in the urban system. It is also important to think how this sector can be strengthened that they never have this trust deficit ever again. There should be a system that the government can secure these labourers for their basics like health, life and livelihood so that they have a permanent system to bank on in such situations in future. The other very important area is to start promoting rural economy as the basis of urban economy instead otherwise and build up health, education and infrastructural benefits to ward off the feeling that urban dwellers are better off than the rural ones.

COVID-19, International Labour Day 2020 and The Have-Nots: May Day or Mayday? – By Dr. Bobby Luthra Sinha

Of COVID-19, Magical Realism, Vultures and Prophets of Doom: Die, The Argumentative Indian? I
By Dr. Bobby Luthra Sinha