COVID -19 and the Rising Discontent in India
By Dr. Bobby Luthra Sinha 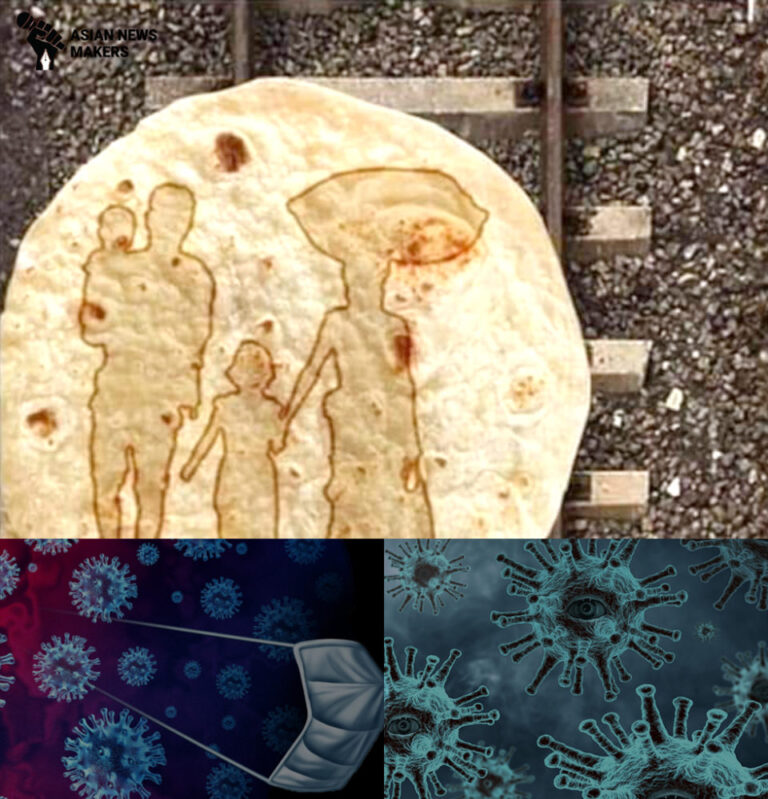 Of Biological Virulence and a socially distanced State

Two political phenomena that emerge from the COVID-19 pandemic in India are worth documenting:

Uncertainty, fear and lack of trust among frontline pandemic management sites and interfaces

On May 14, 2020, the Word Health Organsiation (WHO) stated that the novel Corona Virus may never go away. Close on the heels of that announcement, India’s Corona Virus positive count soared to approximately 85, 709 cases till May 16 2020.

As we experience multiple lockdowns, uncertainty still looming large and what has become demonstratively evident is that the pandemic is not just biologically virulent. COVID-19 is a harbinger of insecurity and hopelessness that is stretching upon the political horizon of states and citizens far and wide.

As per the UN, the pandemic has been causing widespread distress and mental ill health – particularly in countries where there is a lack of investment in mental healthcare. The Indian case shows that a meagre focus and dearth of resources devoted to public health in general is causing alarming rates of fear. Facing massive uncertainty and trauma at the dearth of reliable public and affordable private care systems, the destitute as well as the affluent Indians alike may also be sitting at the precipice of acute psychological distress and anxieties.

In India many overburdened and insecure hospitals, health care staff workers, doctors, patients, state administrations and the centre have all witnessed either direct spats or hit the rock bottom of trust between one another. Not to forget the helplessness and frustration that hits medical fraternities, state administration as well as patients and other citizens alike when frontline  healthcare workers such as doctors and nurses, or even frontline caregivers become COVID-19 positive or succumb to it.

Individual and collective fears in face of pre-existing shortfalls in the Indian public health care sector have added to the public woes since the beginning of the lock down.  In one way of the other, the sick and the suspected COVID-19 patients become totally reliant and at the mercy of lengthy, at times secretive, inefficient and insensitive as well as exorbitant medical protocols in place during the pandemic.

For majority of the Indian population, especially for the absolute under-privileged, completely dependent upon public health sector in India, it’s a nightmare to land in a government hospital. The private hospitals are far too expensive even for India’s upper middle class in face of a situation where, unfortunately, more than one and sometimes all family members need to undergo COVID-19 treatment.

According to a report published in the Economic Times (April 14, 2019), in India 65 per cent of health care expenditure is incurred out-of-pocket, and such expenditures push some 57 million people into poverty each year.

The country relies on just one government doctor for every 10189 people (WHO recommends a ratio of 1: 1000) where as the nurse- patient ratio is 1:483, implying  a deficit of around 600,000 doctors and two million nurses.

Adding to the list above, lack of testing facilities, Personal Protective Equipment (PPE) kits, and adverse patient-bed ratios remain a dangerous constraint in the current scenario. No clear vision or policy perspective from the government on public health is another negative. According to National Health Profile–2019, there were 713986 total government hospital beds available in India. This amounts to 0.55 beds per 1000 population.

Given the extent of healthcare shortfalls we face, easing out of the lockdowns without compromising safety are two reciprocal desires posing a grave challenge for the Indian government and citizens alike. While the shortages and healthcare lapses indicate that the affluent classes should now gear up for a pro-active role as harbingers of their own well- being and care, on whom should the poorest of the poor depend upon?

We are at a juncture when we need to prioritize an immediate relief plan for those suffering, dying and hungry. In all likelihood it seems that upfront and vociferous civil society organisations and NGOs which have had a hard time in India since 2014, may have to bail out the Indian state:

What is not yet clear is whom, how much the State will bail out and how?

Arrival of a socially distant, ritualistic State adds to the woes of the ongoing biological virulence

The search for answers to difficult questions is generally arduously long and seldom requires immediate responses. Time, they say, will tell.

Meanwhile, I document what I call, ‘the appearance of a ceremonial state’ that addresses its citizens in brief messages. Laced with liberal doses of ritual and lip-service, if not pomp, these messages count on impressive and elaborate gestures too. Every few weeks of the Covid-19 disaster, we witness the oratorical skills and rising tonality of our elected leaders commanding and at times even requesting us with folded hands to light lamps, clap our hands, bang thalis, (small round metallic platter used to serve Indian food).

The most glorious show of pomp came when no less than the Indian Armed forces were called in to coordinate the dispersal of flowers on hospitals from atop the Indian skies. The medical fraternity was being honoured and regaled for its services. Per se, a noble aim and an end to which all of us agreed wholeheartedly, but we broke into ravenous high pitched debates on the means of carrying the task through.

For many, the show was mesmerizing and hailed as a masterstroke. For others, the magic inadvertently became symbolic of and revealed the other side of reality: depicting a top-down approach to pandemic management, the ritual remained cool, distant, awe- inspiring, safe and commanding.

In India, the ritualistic state is here to stay through the COVID-19 crisis. F. STAAL, a professor of Philosophy, who specialized on Indian logic, Sanskrit grammar and the scientific study of Vedic rituals, opines that ritual could be a pure activity, without meaning or goal.

Ritual may operate through a limited and rigidly organised set of expressions which anthropologists identify as a “restricted code” (in contrast to a more open “elaborated code”). Anthropologist Maurice Bloch argues that ritual obliges participants to use restricted formal oratorical styles, which is limited in intonation, syntax, vocabulary, loudness, and fixity of order. In adopting this style, ritual leaders’ speech becomes more style than content.

Because a stylistic formal speech limits ‘what can be said’, it not only induces, but rather prompts, the audience towards “acceptance, compliance, or at least forbearance with regard to any overt challenge”. Bloch argues that this form of ritual communication and control makes rebellion impossible and revolution the only feasible alternative.

The COVID-19 pandemic in our country, the second most populous in the world, has brought to the fore heightened processes of inequality. Individuals, groups and communities of people are undergoing different kinds of deprivation, suffering, exclusion, rejection and state negligence.

Not only this, the leaders are overt about letting the country know who is dispensable at this moment. Despite such undemocratic action no rebellion or revolution seem possible or even required, perhaps not as yet in India.

Amidst its tepid public health management and when many a migrant labour were and still covering long distances by foot, being crushed on railway tracks or in road accidents and becoming weak with hunger and dying of starvation, on May 12, 2020, India announced plans to spur the economy including small and medium businesses as part of an INR Twenty Lakh Crore package ($266bn/£216bn).

However, concerns for macroeconomics and GDP apart, the package remains silent on the immediate fate of informal, destitute work-force and poor migrants left to shuttle frantically between roads, railways, cities, towns and villages. Saving and reviving the bodies, dignities and strength of the starving migrants and workers from unorganized and informal sector should have been the foremost micro economic measure upon which the long term process of building the macro economy could have been build, gradually and in the background.

Sociologist of memory, Paul Connerton, in his seminal work, how Societies Remember, suggests that memory is a deeply social activity. Memories run through our corporeal world of families, communities, cultures regions and eras to become part of our experiences and practices that last us over various generations of states and governments. Bodily memories allow us to bring forth alternative, oral, real life and everyday narratives over and above the predominant, written and recorded discourses such as nation, nationalism, economy and development. Our bodies, hence, are sites and interfaces of corporeal and silted memories transmitted to and by us in various forms.

Whether the State actually delivers humanitarian justice or lays aside its opaque silences as evident in the economic package announced by it, time will tell. Meanwhile, as citizens we  propose  that our national economy is not build on the memories of dead bodies and the pathos of the victims of a socially distant, ritualistic and  virulent system of state and government.  .

Moving on: Imagining the post COVID-19 world with holistic perspectives

With mass discontent setting in, we witness direct repercussions such as disappearance of trust from many state-citizen and citizen to citizen contexts during the ongoing COVID -19 crisis.

The pandemic has taught us that processes of conviction and faith that make socio-political life feasible in peaceful democratic nations take ages to be put in place but require a 24/7 dedication to be maintained. Otherwise these process may rupture and disrupt very easily.

However, disruptions or ruptures to normalcy do not mean that positive ways of looking ahead are not possible.

Putting trust back in the state and central government is not easy and would be dependent on how actual measures are implemented on ground. The extent to which citizens exercise their agency to organize themselves, remain vigilant and restore micro-political dialogues with the governmental structures will determine State accountability.

Social theorist Anthony Giddens takes a holistic view of modern society: A society is not made by a single person or a structure alone. It is created and recreated afresh by the participants in every social encounter. The production of society is a skilled performance, sustained and ‘made to happen’ by human beings.

Giddens opines that the structure and agency are not as separate as they may appear to be owing to a duality which makes their synergies meet: social structures possess a bipolar nature as both the medium and outcome of social agency.

Through the concept of agency, Giddens, attempts to explain how social structures are formed and reformed. Whether in the shape of individual agency or a collective force, the will of determined and organised ‘citizen-subjects’ is hard to be waylaid by negligent states.

For long times to come, Indians, just as citizens all over the world, will remember how COVID-19 thrust upon them an unwanted  package of  death, disease and ill preparedness of the State. Lip service to reforms and welfare deals, a tongue-in-cheek oratory or ritualistic shenanigans of power practiced by a socially distant state are definitely not going to ease the discontent setting in.

News is that though medically the ‘pandemic’ will eventually be chased away, the virus and the memories of these viral times may never leave us. Under such circumstances, what will the Indian State chose to do and how will the people respond?