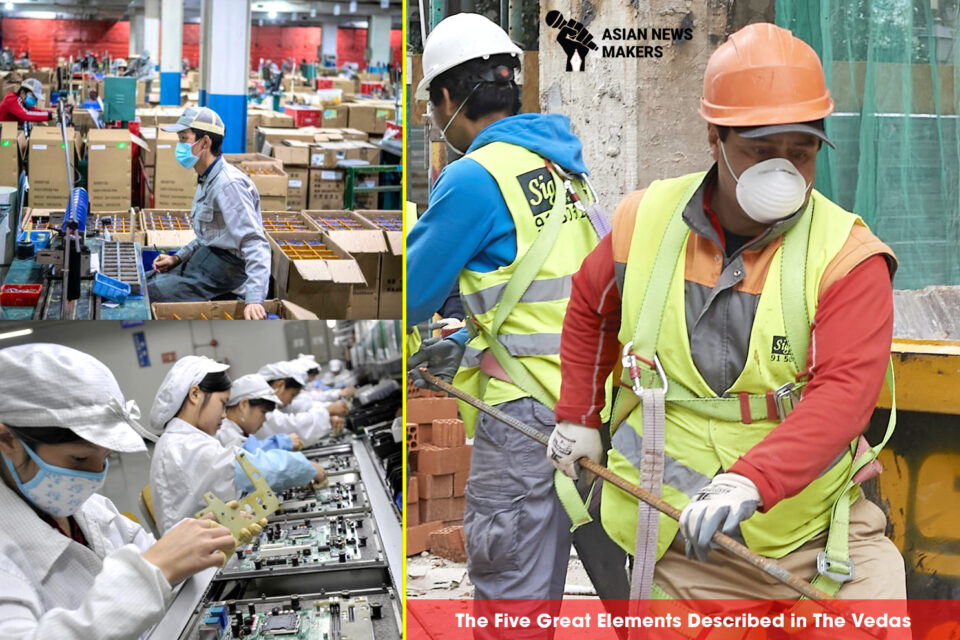 The five great elements described in the Vedas – earth, water, fire, air, and space – are identified as the building blocks of all material existence. This as a matter of science, not spirituality. The implication is that all physical manifestations are derived from these natural elements. Water, food, energy and every material comfort we imagine for ourselves is brought into existence from a mixture of these densities.

In the modern history of civilization – as we currently acknowledge it – we have fused these elements in increasing complexities over the last two millennia, resulting today in all manner of amenities (and ailments) that we have become accustomed to.

Yet there is abundant recorded evidence that earlier civilizations – Sumerians, Aryans, Egyptians, to name a few – used these forces with great harmony to make much more sophisticated applications than are in use today. And there are tales of still earlier civilizations that were even more technological than any that are documented in modern science.

One can argue that our use of these noble elements has actually deteriorated as our economies have progressed over time. The degradation of the planet’s environment has been so great, in fact, that it is no longer sustainable. It has already unleashed climate change and other imbalances in natural ecosystems which eventually will threaten civilization itself.

In particular the burning of fossil fuels to generate energy to power machines has wrought great destruction upon nature, and concurrently unleashed inequality and violence from desperate competition for scarce resources. Capitalism, as we know it, is an outcrop of these dynamics. Not only energy, but also water and land resources required to sustain ever growing societies are each intricately linked to the other to form the industrial economy.

To this mix we have now added the etheric element of the digital economy. As consumption moves from a physical infrastructure onto a digital one, we are diverting energy and other resources towards a virtual economy – in which we consume information and services as much as physical goods mixed from earth as fashioned from fire.

Today even basic necessities like foodstuffs and medicines are artificially designed. Soon the internet of things will bring each and every product online for digital monitoring and management by artificial intelligence. The financial system which enables international trade has already migrated away from gold and silk trading routes into bits of data charging about empty space. As the Fourth Industrial Revolution hurtles us into the virtual economy, a Virtuonomy, we should also spare a thought from time to time as to whether it is also a virtuous one.

The increased use of the element of space in the Virtuonomy presents a quantum leap in not only the utility of space but also the other elements. Harnessing power out of the ether is no longer science fiction but has practical applications possible from new materials such as graphene. Likewise, the shift towards the electrification of vehicles and machinery will significantly reduce the demand for fossil fuels, especially as renewable energy sources proliferate.

The onset of the coronavirus pandemic and the ensuing lockdown of commerce and commuters has demonstrated how, within weeks, the environment can cleanse itself of pollutants in air, water and earth; and restore natural ecosystems with animal and plant life.

The earth is indeed a living, conscious being whose inhabitants – namely, us, humans – have thoroughly mistreated it, through the sociopathy that permeates across nations, communities, and individuals. Whether it is by race, religion or orientation, we have allowed ourselves to be defined more by that which divides us than unifies us. Sadly, in politics, economics, and cultural discourse this has never been truer than it is now.

Sociopaths can only control those who give them the power to do so. The fourth industrial revolution Virtuonomy, holds the promise of decentralization of institutional control into the hands of the people. Blockchain and AI in particular can ensure users control over their information and data without it being usurped by global technology giants and governments – finally giving the people ownership over the digital information they create and the economic value that derives from it.

In the hands of the individual, in the Virtuonomy, the old adage that one man (or woman) can make a difference can finally come to bear. Yet, as JFK added, everyone must try. If the disposition of the individual is positive, then the disposition of society will also be positive. Down to the person, sociophiles will always outnumber sociopaths. There’s no longer an excuse for pointing your finger at the Man, when you have been made your own Master.

COVID -19 and the Rising Discontent in India By Dr. Bobby Luthra Sinha