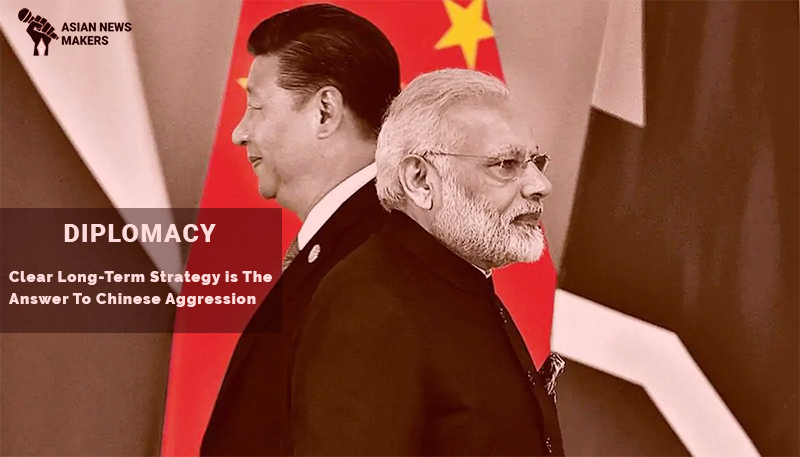 Why is China Angry? Or is It Actually So?

Military standoff between China and India which started early May is inching close to boiling state each passing day with no sign of receding the temperatures. While there is a clear dichotomy in the floating satellite pictures on social media of Chinese build ups on the banks of river Galwan in Ladakh and official versions from India and China, there has been least which is being done to take on china by India strategically as well as politically.

In absence of any clear strategic resistance from India, China is quietly acting on the borders without much communication or the explanations for the world but for a lone interview of the ambassador to India blaming it for the situation.

Satellite images released by Maxar exposed how China is extending army structures and establishments on Indian borders. Despite vivid and undisputed proofs no one seems ready to ask tough questions to China for its belligerence on India borders not even India the closest and only party to the dispute. In absence of any apparent tough stand by India, China definitely appears emboldened which is showing in its increasing army presence and clout on the borders of Ladakh.

1962, The Only Referral Point Between India And China

The infamous 1962 war sealed the reference points between India and China and there have been no fresh milestones to refer to ever since despite more than five decades of shared independent borders. Despite decades of political and diplomatic engagements and government to government outreach by successive governments, China keeps going back to the borders between the two countries to reinstate its positions pushing the enhanced understanding back to the same ticking point where it was left in 1962.

Much water has flown in the rivers since 1962 but both China and India stay put where they stood decades back. India of 2020 seems to be behaving exactly what India of 1962 shockingly behaved during sudden Chinese backstabbing amidst “Hindi Chini Bhai Bhai sloganeering”. India of 1962 was like a young child with little worldly knowledge and short in amenities.

The clashes of 2020 between India and China may create new milestone beyond 1962 and can be defined through a new prism. While 2020 clashes so far are the bloodiest in 45 years as China leaves everyone guessing with its intentions and border posturing India’s reactions are creating more confusions in absence of any clear line of defence or offence.

Clashes of 2020 which visibly started in early May are the extension of the border aggression from China since 2019 after Indian parliament repealed Article 370 bifurcating J&K and Ladakh as Union territories. The repealing did come with high voltage nationalistic rhetoric of Indian Home Minister Amit Shah vouching to take back Aksai Chin and POK from China and Pakistan respectively. Union territory status to Ladakh meant direct central control from Delhi which irked Beijing as this somewhere tipped its intensions for Ladakh region.

Aksai Chin, the bone of contention since 1962 is the Chinese occupied territory of India. Home minister Amit Shah had vouched to sacrifice lives to take back the territory from China saying, “…I want to put this on record that whatever I say state of Jammu and Kashmir in the House, then both POK and Aksai Chin are part of it”, which was strongly opposed by the Chinese government even lodging a protest in a closed door informal session of UN security council, mentioning that India’s action has , “challenged the Chinese sovereign interests and violated bilateral agreements on maintaining peace and stability in the border area..”

While the change in administrative and constitutional structure of J&K can be described as the internal decision of India, the statement by the Indian home minister in the parliament while striking down the Article triggered China to act and reinstate its positions in the region. Aksai Chin is not only a guilt of China but any mention of it also creates insecurities in Beijing besides giving it an opportunity and reasons for its long-term expansionism policy for the entire range of land starting from Tibet to Nepal, Ladakh, Bhutan, Sikkim and Arunachal Pradesh.

The same has been repeated time and again by the Tibetan government in exile. In a media interaction recently the president of the Tibetan government in exile, Dr Lobsang Sangay maintained that “Beijing was looking to accomplish its ‘five-finger’ plan. After the occupation of Tibet in 1960s Chinese leaders had said Tibet is the palm, now they have to go for five fingers i.e Nepal, Bhutan, Sikkim, Arunachal Pradesh and Ladakh”. He however emphasised that Doklam clashes of 2017 at the borders of Bhutan and Sikkim were the part of the grand long-term expansionist strategy of China.

Road Ahead For India And China

58 years may be a big time to deal and understand some relationship but the same doesn’t seem to be the case with India’s understanding of China, its character and strategic choices.

China of 2020 is nowhere comparable to China of 1962. Its economic stakes have grown manifold and that has become more the reasons for increasing and maintaining its geographical clout in Asian region. The current stature and contemporary ambitions have boosted the Chinese expansionistic approaches way beyond its traditional boundaries.

China moves with a long-term expansionist policy as the only permanent policy which fits every sector-boundary, foreign policy, economy etc and keeps indulging in many short-term theatrics while keeping an eye on its long-term goals.

One-sided war of 1962 was China’s long tern policy in order to gain geographical as well as strategic clout in the region by inching close to Tibet through Aksai Chin. Since than it has been testing its muscles at Ladakh borders time and again as part of its short-term policy while simultaneously engaging politically with India and making economic inroads into “enemy country” while not diluting its long-term plan of geographical extensions.

Border clashes of 2013 in Ladakh and 2017 in Doklam were again the muscle testing exercise to test the mood and the political and diplomatic posturing of India while it kept an active and simultaneous political engagement and economic exchanges open. 18 meetings between Indian prime minister Narendra Modi and President Xi Jinping and many bilateral agreements are no mean engagements in span of half a decade.

What and how India has so far reacted to China’s aggressive army build-ups and overreach on border is the clear expression of non-existance of any strategy vis a vis borders with China are concerned. It also shows that the current government is more committed to engage with its local audience with nationalistic jingoism and rhetoric like “we will lay our lives for Aksai Chin and POK” to gain political mileage without thinking that the same rhetoric are being taken note off across the borders and there should a strategy before such statements are made.

The Problem With India

Even after a fortnight of killing of 20 army personnel on borders on 15/16 June there was no official statement by the army but for a briefing of ministry of defence acknowledging for the first time officially the Chinese presence on the border and defusing Chinese blame for Indian aggression.

Prime Minister did finally speak for the first time on the current border clashes after the killings of 20 Indian army personnel but without any strategy. Only time the home minister made the statement was after the lone ‘all party meeting’ on the national issue emphasising that “India is one and it unites when it comes to matters of national securities” while the PM’s unequivocal message was that all parties have faith in the valour of India’s armed forces and their ability to defend India’s sovereignty.

While army chief was quite after the loss of 20 soldiers, no statement from foreign office or chief of defence staff came despite several round of meetings between these. As the media tracks the advances of Chinese army into Pangong Tso lake and Galwan valley beyond LAC there has be no sign of political engagement or diplomatic talks to counter the dragon.

As India is appears to be grossly short of any strategy to deal with the growing Chinese aggression political minions have actively taken over the stage to tackle media and manage the local audience. Meanwhile china is expanding to newer boundaries way beyond the traditional lines of disputes.

No, China isn’t angry. It is only playing its card well and right. Testing the ground well before it can bring out its best kept card for the master stroke. India is simply proving itself as a naïve and amateur vis-à-vis foreign policy is concerned.   At the moment can’t see beyond its local political aims and seems to be stuck between the nationalistic jingoism and election targets.

China is shrewd. It always was. To deal with country like China best is to go back to hard-earned lessons of the past. Only a strong and competent army is just not enough. A political will and a long-term strategy along with many short-term ready-made plans are important. Shunning the business relationship can be a long-term plan but a strong strategy is important without compromising the sovereign interests.

What Are India’s Options

A strong diplomatic and political message is required. As they say, in politics there are no permanent foe or friends but diplomacy is an uncanny game, where reality is starkly different to what appears on ground.  More than the enemy sometimes it is the friend which is untrusted most. India has lessons from the past it just needs to clear the dust and take on China to protect its sovereignty.