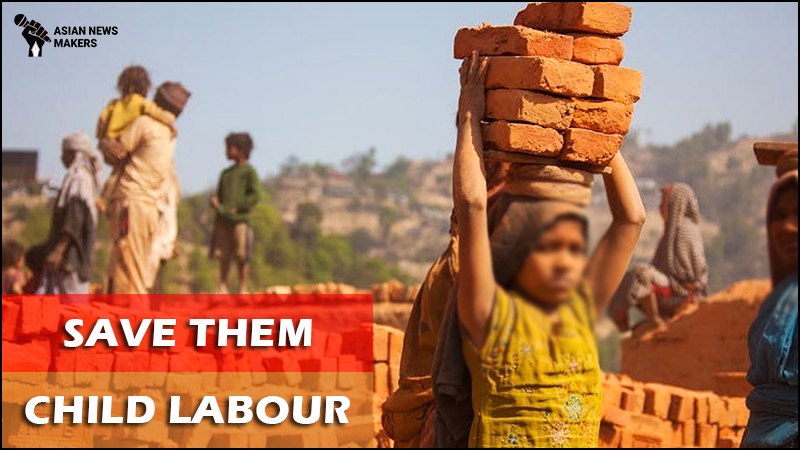 Many teachers of government school think joining duties during pandemic and preparing online teaching assignments for students are vain efforts. It is painful for these teachers to find their students selling vegetables or doing odd jobs like taking care of their siblings, instead of following online assignments.

Missed schooling, many teachers say, is resulting into increased child labour. The loss, they worry, might be irreparable. Prolonged absence from school might not bring back the hundred per cent back, as either the children are being trafficked or too consumed in labour to support their family in absence of lost livelihoods.

The biggest ‘bad news’ about corona, therefore, is neither the health care breakdown nor recessive economies, but that the children have been marginalized most, exploited most and victimized most.

Direct result of failing economies and breaking of supply chain is the increased child labour and the biggest folly of digital education too is the surging number of child-labour, believe many of these teachers.

Dropping GDPs, economic down sliding and recessions can be treated by a fair policy matter but what has been lost in terms of child labour eradication efforts is beyond repair. It is back to ground zero what all was achieved in past many decades.

When around 24 million are estimated by the UNESCO to drop out of school due to covid19 and millions more children risk being pushed into child labour as a result, possibly leading to first rise in child labour in 20 years, what should be the biggest matter for the policy makers other than the children?

Poverty and child labour are linked. One per cent rise in the poverty leads to at least point seven per cent increase in child labour. “60 million people are expected to fall into poverty this year alone”, as per a joint report by UNESCO and ILO.

With such statistics is it still anyone’s guess how the increased poverty would affect children?

Child Labour not an isolated issue

Child labour issue cannot be seen in isolation as, “it is not only the cause but also a consequence of social inequality reinforced by discrimination. It is the combined product of many factors, such as poverty, social norms endorsing it, lack of decent work opportunities for adults and adolescent, migration and emergencies,” elaborates UNESCO.

Pandemic has overturned what had been achieved in last 20 years in terms of eradicating child labour. Many civil right activists believe, “we have gone back to where we had started from, in terms of child labour eradication”, says Rao Narendra Yadav, CEO, Children Unbound Foundation, India.

In past many years due to government interventions and rehabilitation work by international organisations and civil society there had been a significant awareness and decline in child labour. Shrunk economic opportunities during covid19, especially for poor labourers have resulted into an alarming rise in child labour.

“Child labour activities are increasing during the pandemic due to multiple reasons. On one hand there are livelihood crises and on the other hand schools are closed and children are free so parents think they can utilize children in work by engaging them in readymade odd jobs. Parents are pushing children into child labour. How much is the impact in terms of the statistics is very early to say,” maintains Rao Narendra.

For a principal of a government school in Faizabad district of a northern state of India, online education is a futile exercise. In the strength of 106 students of standard 6, 7 and 8 only 5 to 6 students have uninterrupted access to smart phones. “We are simply uploading the videos which very few are watching. Rest others are involved in either farm labour, selling vegetables or household works. Missed school has hundred per cent resulted into increased child labour I assume”, says the worried principal.

The trend is alarming when we see it along with the UN estimate of 24 million children which may likely drop out of school and would presumably be engaged in labour. Due to pandemic children are sitting at home doing nothing. Older children are not expected by their families to sit idle hence they have gone back to the fields or other labour works.

Poverty and Corona have pushed millions of children into miserable state concluding that the biggest ‘bad news’ of Covid19 is marginalization of children in a big way.

Squeezing household incomes are pushing children into multiple exploitative situations. It is not only the forced labour issue but violence against children and child trafficking too has suddenly picked up.

Educationists and teachers fear that prolonged absence from school and engagement in labour work would derail all the efforts done so far in the field of education.

Otherwise also the government teachers have a tough task of pulling the children from poor families to school and retain their interest. “even otherwise these kids work in fields after the school. Labour gives them immediate incentives in terms of money. Now they are engaged full time. Condition of children are very critical and tragically the situation suits well to the parents as well as the contractor. Contractors get a cheap labour in form of children and the parents either use them as an extra earning hand or use their children as a replacement when they just loiter around or sit idle”, complains a teacher in Aligarh district.

In interiors of India with a dominating tribal population it is a different story. Rajsh Ranjan of Invironics Trust, who works in Bastar region of Chattisgarh, says that tribal population is very poor and they have acute shortage of cash. Children of poor tribal belts look at child labour as an opportunity for easy money. Most of the male children who can take long journeys to the work site don’t mind staying away from their families. When they come back home these children have good money that they use to buy mobile and motorbikes which they otherwise can’t afford due to acute poverty.

According to Rajesh Ranjan, in tribal areas of Bastar and Sewan, menacing aspect of child labour is child trafficking which he says shot up as the lockdown started opening. “Tribal people may not be eating balanced food, but they are not short of food. For them biggest issue is the unavailability of cash in hand. Parents get lured by money and allow their children to be trafficked by the agents”.

“In Ambika Pur tribal belt many people have become active in engaging the child labour during pandemic. In absence of livelihood easiest thing people find is to sell their children in a paltry amount to work in other areas,” says Narendra Yadav.

According to Kailash Satyarthi Children Foundation’s recent report, “21 per cent of the household are potentially ready to send their children into child labour due to their increased economic vulnerability”.

“During the lockdown period Bachpan Bachao Andolan, rescued nearly 780 children and then followed this by rescuing 200 more when the lockdowns were lifted,” says Rakesh Sengar, executive director Kailash Satyarthi Children Foundation, adding that, “an interesting trend has been noticed during the rescue operations. Traffickers are deploying buses to traffic children from states like Bihar to Delhi and as far as Gujrat.”

Such trend is clear indicative of the desperation on both sides, the employers as well as the poor families in need of money and employment.

In such situations as these when there is loss of livelihood and children are home, not only they are subjected to forced labour and trafficking, there is a strong possibility of violence against children increasing.

Civil right activists and teachers in rural areas fear that the situation might also trigger child marriage of young girls.

“Children should be made part of Covid19 response”, says Rao Narendra Yadav. It should also be the responsibility of stake holders like village panchayat and sarpanch who can mobilise families against the child labour and trafficking, he insists.

Covid19 pandemic may be an “Act of God” but tragically it is tasked upon humans to calculating the damage, remedying and course correct it. What needs an immediate attention is the state of children which have been the biggest victim of corona pandemic.

When Indian finance minister Nirmala Sitaraman told Indian Express after announcing fifth and final tranche of Atm Nirbhar Package (relief package for Covid19),  in the last week of August, “ I have to be ready because no one knows how this is going to withdraw…I can’t finish my story with these announcements”, she in fact was right.

The task of correcting the pandemic catastrophe isn’t complete till children are covered under special package and are made a part of Covid19 response mechanism.

Medicine for Corona: Hope in Offing By ANM Bureau