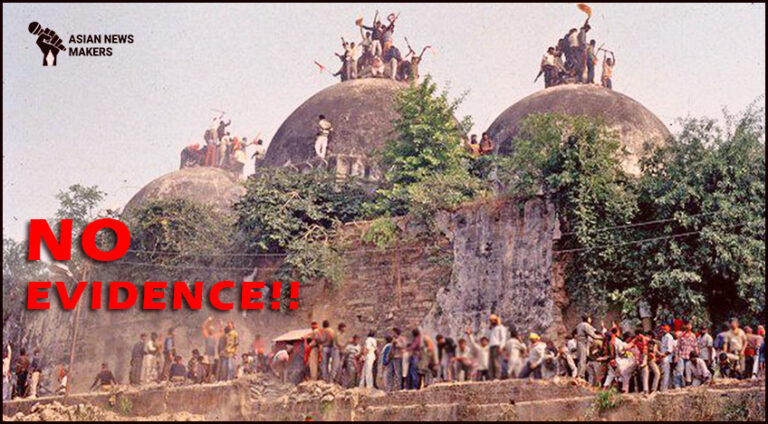 Nearly thirty years after the demolition of 16th century Babri Mosque, when a special CBI court acquitted all 32 accused in absence of evidences, people of Ayodhya who witnessed the frenzy of karsewaks (volunteers) on the fateful day feel there never was a dispute over the Ram temple amongst the people. Politics over the temple was not required in the land where Ram was loved and revered by all across the faith, they feel.

For 90-years-old Champa Devi Poddar of Ayodhya and many others like her, the memories of the fate full day, the 6 December 1992, have not faded yet, when the Babri Mosque was razed to ground in no time by a huge mob.

“How can it fade, for anyone who witnessed the history in making which was to change the political and social colour of India, forever”, asks the scholars and those who have lived for ages in this non-descript town of Ayodhya.

The CBI court may have not found the evidences against those accused leaving the basic question of ‘who demolished the historical Mosque?’ yet to be answered, for Champa Devi and many more like her, it was just the matter of faith. Politics neither mattered than nor does it matter now for them.

For the residents of Ayodhya, December chill of 1992 around thirty years back was some sort of opportunity to contribute their share for their very own lord, the revered Ram, the Purushottam, and ‘the most ideal’.

The people of Ayodhya saw it becoming, as the rest of the nation too witnessed from the distance- their Ram into some sort of frenzy of faith.

L K Advani’s rath yatra and the call for Ram temple, “was the call of the Lord itself”, believed many in Ayodhya.

These innocent faith-loving people, “deeply in love with Ram”, just wanted to be part of this call for nothing but the sake of their faith.

Days before the fate full day Champa Devi, Uma Poddar and many other women like them indulged themselves in feeding hundreds of thousands of those who thronged the city. The memories of December 6, 1992 are clear and vivid with them.

“I still remember how we, women folk, had fed all those who were coming into this city of Ayodhya many days before demolition of Babri Majsid. We used to organize Langars, free foods and took on ourselves to take care of those karsewaks who were thronging into Ayodhya in groups of hundreds and thousands”.

“What I profoundly remember is, I along with my family cooking Puri-Sabji and preparing tea for all the sewaks who were pouring in from across the nation. Ayodhya was buzzing with people. Just like me, females of every other houses were busy in feeding hungry sewaks. After all, it was for our Lord Ram. If I am not wrong, something was happening related to the Ram Temple, but that was enough for us to be a part of it in any way possible”, expresses Champa Devi Poddar in her frail words but clear memories.

“It was an ecstasy”, says Uma Poddar. Everyone was indulged in only one thing and for only one reason—the construction of Ram temple.

We were just too happy–for the call and the mobilization for the purpose of Ram temple. For us politics mattered least, and we assumed or guessed nothing of what turned out to be on 6, December 1992, she says.

This was not just for Ram, many realized later, and also felt cheated too, for the exploitation of their innocent faith and religion for political gains.

But then, there were still many for whom what mattered most was the Ram temple, “the means are not important sometimes when the purpose was big”, they retort.

Nonagenarian Champa Devi, then, 30 years younger, and others like her, were heart broken and distraught by the end of the day, the 6th December 1992.

This was not just for faith they realized later, when over thousand innocent people including karsewaks lost their lives. Bringing on ground, another temple of faith-the Babri Mosque, for seating Ram on his due place was something they could not accept as faith loving “simple people”.

“This was not the karsewa, this was not for faith”, felt many those who witnessed the frenzy of mob in Ayodhya on December 6, 1992.

For the people of Ayodhya, who saw the mosque razed to the ground in no time by thousands of those who did not belong to their town and emerged from nowhere was a breach of their “trust”.

Ayodhya, the nondescript town till 6th December 1992, the town of innocent faiths and innocent people who believed in Ram irrespective of religion, was still not divided into faith but their trust was definitely broken.

Ayodhya: From Faith to Politics

“Ayodhya is simply a multi-religious town for me, nothing more, nothing less”, says Prof Aryan Shukla, of Ayodhya.

“In the maze of religion and development, it is imperative to also remember that Ayodhya is a city which accommodates not only Hinduism but also Islam and other religions. The political discourse since the 1990s has mostly highlighted the conflicts between two major religions but what it has failed to portray is the harmony with which it holds multi-religious citizens”, says Prof. Shukla.

“Ayodhya is a metaphor for me. In the sense, it has become a means to convert a huge lie into a truth-a lie of Hindutva and immorality. It has never been a religious campaign but entirely a political campaign”, insists Prof. Anil Gupta, who has been teaching in Saket University, Ayodhya, for more than a decade.

“Ayodhya has a natural disposition towards a religious character, but it is still incomplete without the blend of other characteristics”, which Dr Lakshmi Kant Tripathi so appropriately says adding, “for every person the understanding of the city depends on his/her priority or reasons to reside here”.

Many of these scholars in Ayodhya believes that the “unfortunate events of 1992” were nothing but the politics to “gain and sustain power”.

Yet, not everyone who resides in Ayodhya relates everything to 1992. For the common people, Ayodhya is still what it was many-many years ago – a quiet place to worship Lord Ram, where Ram was loved and revered by all. A town which hums with evening prayers, lights with Saryu Arti and smells with Desi Ghee ludoos.

And for people like Champa Devi Poddar, who expects to see the Ram temple constructed during her lifetime, the pain of demolition of Babri Mosque on December 6, 1992, will still be the lasting memory of that fate full day for which there is no culprit in the eyes of the law.

By Binny Yadav (with Inputs from Skand Agarwal)