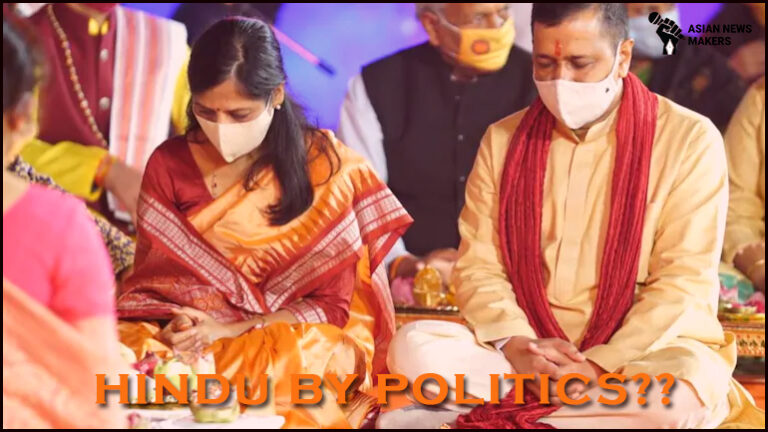 When gimmicks beyond a point are bound to fail, onetime disciple or ‘Chela’ of Anna Hazare, resorts to India’s most influential gimmick-games. It’s called Religion and temple hopping !!

Are Muslims and other minorities being counted under Hindu-politics?

Religion has graduated in India beyond the Marxian definition of being opium. In the politics of a country paradoxically billed as the world’s largest democracy, religion has become a powerful tool.

Ideologically, almost all Indian politicians now look committed to the pro-Hindu ideology of accepting India as Hindus’ nation. But a very few like Arvind Kejriwal, the current chief minister of Delhi state, stood out. That was until recently.

Kejriwal emerged as a politician in the last decade after his long campaign against corruption.

Between 2015 and 2019, he presented himself as the chief apostle of Indian secularism against Prime Minister Narendra Modi’s hardline pro-Hindutva politics.

But in 2020 Kejriwal has been busy walking barefoot to temples and offering prayers.

Who in India would have bothered about someone doing that in his personal capacity on a festival day?

Kejriwal has decided to make a public spectacle of his newly found religious devotion to Diwali, India’s biggest festival of lights. Political compulsion is the mantra of pragmatism.

On the auspicious moment of the festive day of Diwali on Nov. 14 evening, he led – in his own words – Delhi’s 20 million people virtually joined him and his ministers for prayers at the city’s opulent Akshardham Temple.

“I, along with my ministers, will start the Lakshmi puja [worshiping goddess Lakshmi] at the time at Akshardham Temple, which will be telecast live by TV channels. I urge all Delhi people to turn on your televisions and sit down with your family to conduct Lakshmi puja,” Kejriwal said in an audio-visual appeal before the mega show which was also televised live.

The ‘change’ in Kejriwal has stunned most of the more than two million Muslims in the city. Trader Naushad Ali in East Delhi used his cricket lingo to express the feeling: “It’s a case of the fall of another secular wicket. A one-time anti-corruption crusader should have avoided such political trappings.”

Kejriwal’s poll mandate showed that the new leader and his party could challenge and defeat the seemingly invincible BJP and Modi with secular ideologies and transparent politics.

As expected, Kejriwal overnight became the ‘talk of the town’ and stalwarts like former Prime Minister H D Deve Gowda and other opponents of the BJP such as Sharad Pawar – heading NCP in Maharashtra – had hailed Kejriwal’s hard owned victory.

A Muslim legislator Shoaib Iqbal, an enthusiastic confidant of Kejriwal, had told this writer: “The mandate in Delhi shows,

Arvind Kejriwal is the new leader who can take on the hitherto considered invincible power of Narendra Modi”.

Others had said that Kejriwal’s winning performance in 2020 and also five years back in 2015 showed that the ‘secular polity’ something different from Modi’s pro-Hindutva tilt too was good enough to deny the BJP the much sought after electoral win in Delhi.

But within a few months, Kejriwal has now decided to ‘appease’ Hindus. This is the flavour of the season. In other words, the right wing politics is here to stay

This phenomenon has attracted the erstwhile apostles of ‘secular polity’ like Kejriwal and also communists and a few more provincial leaders.

In Delhi polls, five assembly segments – with about 30 per cent of Muslim voters – came to the AAP rather easily.

The Modi government critics say as a law the CAA is discriminatory towards Muslims. The CAA row had fetched some ‘bad names’ for the Modi government even overseas as a number of European Parliamentarians had moved a resolution against the new law.

However, the ‘Hindu appeasement’ card did not come to Kejriwal and his leadership for the first time. In fact in the run up to the Delhi assembly polls, Kejriwal’s colleagues and Ministers went to Hanuman temples more than once, made a public view of the same and even spotted ‘red marks’ on their forehead following the well-known Hindu tradition.

Analysts felt that Kejriwal has brought a different brand of politics and temple visits or conducting rituals did not matter to the voters.

It was believed till February 2020 that while Prime Minister Modi, his party BJP and their poll managers made ‘a lethal combination’ of hardcore Hindutva and development; the AAP on the contrary had the image of a doer – that is ‘development’ and tried to play a politics as a catalyst of the ‘soft-Hindutva’.

But the Diwali puja programme or rituals along with all ministerial colleagues prove Arvind Kejriwal has decided to give up the ‘mask’ of a protagonist of a secular-polity or soft Hindutva.

Now, Kejriwal also wants to play the real game. “Do not forget, we were the first party to welcome the abrogation of Article 370 in Jammu and Kashmir,” said an AAP leader in February itself.
On the other hand, trying to strike a soft balance, Kejriwal’s deputy chief minister Manish Sisodia even had said – “True nationalism is working for people’s welfare and giving them education”.

But Akshardham temple visit on Diwali evening and bringing in television cameras for the puja ceremony is hardly a kind of ‘nationalism’ that Indians cherished for the last six decades and more.

Trinamool Congress leader Mamata Banerjee, known for her pro-Muslim stance, has started wooing Hindus by reciting Sanskrit mantras worshiping Hindu gods and goddesses during public meetings. In other words, the majority’s Hindu religion continues to play political roles in India, and no one finds it a problem.

Kamal Nath, a former Madhya Pradesh chief minister and secular Congress party leader, organized a recitation of religious discourse in Bhopal on Aug. 5 and sent 11 silver bricks to Ayodhya, considered the birthplace of Hindu Lord Ram, for construction of the grand temple there.

On several occasions, the Congress party has tried to describe its top leader Rahul Gandhi as an ardent worshiper of Hindu lord Shiva. During the Delhi riots in February, mobs shouted the slogan “Hinduon ka Hindustan” (India belongs to Hindus).

In some places, thousands marched shouting “Shoot down the traitors.” The word traitor has somehow become synonymous with Muslims as historically they are seen linked with Muslim invaders. In the current politics, Muslims are generally projected as more loyal to Pakistan, the Muslim-majority nation carved out of British India in 1947 for Muslims, which turned out to be India’s arch-rival.

Politically and socially, it is easy to target or neglect Muslims in India just because they are an electoral minority. Some 200 million Muslims, 10 percent of all Muslims in the world, live in India. But they are only some 14 percent of India’s 1.3 billion people, more than 80 percent of them Hindus.

Is Kejriwal then the last wicket of Indian secularism falling?

If there is polarisation in politics, its reason lies with the people of India. The stream cannot be different from the source. Hence, the correction ought to come from the common masses — their ability to see reason in actions.