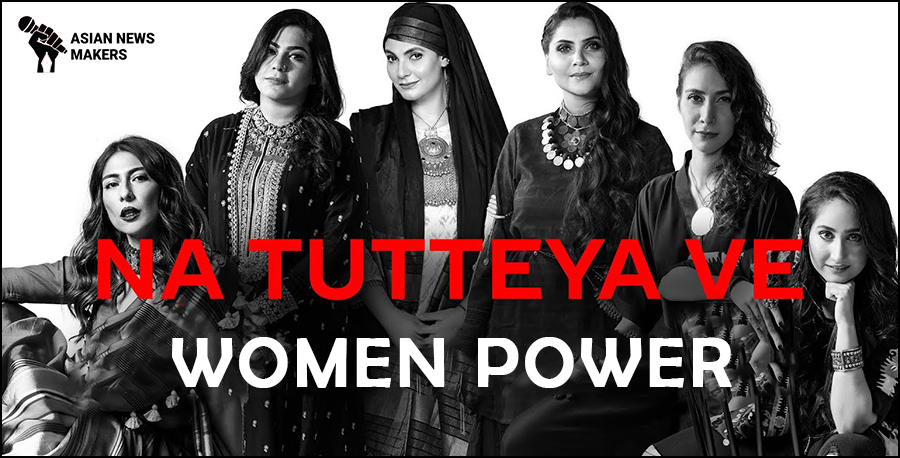 Music transcends boundaries, emotions are universal and when the two come together it shakes the beliefs and the dogmas. International Women’s Day, besides the celebration, gives much reason to talk how doctrines are still the norms against the ‘other’ half of the population, which still is given a refuge under pseudonym of ‘fair sex’ and still is tormented.

International Women’s Day 2021, is fitting occasion to talk about Na Tuteya Ve (Oh it doesn’t break), the December 20, Coke Studio, release which brought together the emotions of women and what a hard response to the patriarchy in its own bastion, the ‘rap’, by all women group.

The Punjabi song described by its makers as an all-female anthem espouses the cause of women. The lyrics by Shuja Haider and Asim Raza, and vocals by Meesha Shafi, Fariha Pervez, Sehar Gul Khan, Zara Madani, Wajiha Naqvi and Sanam Marvi, poetically reflects the everyday hardships women experience and put forth the demand to their male counterpart- to create a society where women are treated with respect and equality.

The chorus of the anthem ‘Dil mera tutda tut na tutiya ve‘, translated as ‘that my heart suffers greatly but does not break’, itself speaks a lot. Songs talks about all what women go through in day to day lives, the eve-teasing, the patriarchy and much more.

The objectification is everywhere, if she goes for mundane household chores, like getting utensils repaired, or is dressed in finery, the jeers, taunts and looks are everywhere. These seemingly ‘normal’ occurrences are so internalized in ‘us’, the women, that ‘we’, tend to ignore them as norms, but still these very jeers, taunts and looks pierces the heart and soul like arrows and bullets.

The songs also talks about marital rights. The wife promises to be the ideal wife – accept the husband’s family as her own, but only demands equality in return and that she is treated an integral part of her new family. Na Tuteya Ve is also a statement of demand through ‘rap’ that even God ordains respectable treatment for both men and women.

The ‘rap’ elaborates upon the woman’s heart which it says is also the graveyard of her dreams. But she is aware, constantly, of those unrequited aspirations, goals of whose accomplishment she was not even given a chance. Although the society tends to ignore what is going on inside a woman’s heart, everyone is a witness to the fact that our meaningless social mores have crushed many women and girls, symbolized by Heer, Sassi, Sohni and Laila- women who dared to go against what the society had to offer; this rap delivers a simple yet profound message- don’t assume the tolerance of women as their inability for aggression.

All female group incidentally has men as instrumentalists, composer and lyricists to compliment the female singers. The soothing music juxtaposes a unique aspects of tradition as well as modernity in style and composition. Beautiful, simple and powerful euphemisms are used, like the work of repairing utensils for seemingly simple yet important work, considered inside strictly a woman’s ambit of duties; giving the wife ‘roti’ (food) for equal treatment; and most importantly woman’s heart for her tolerance, and its breaking for her resilience. Due to its being bold reflections the ‘rap’ breaks away from the normal style of singing.

Na Tuteya Ve, a fitting response to #metoo and stands for feminism

‘Rap’ is considered a ‘men’s domain’ and is also controversial for incorporating misogynistic and homophobic lyrics. However Meesha Shafi also uses rap brilliantly for the feminine cause, with threatening yet enthralling lyrics. This anthem could also be seen in the light of ongoing dispute between Shafi and the famous singer and actor Ali Zafar; which started after she accused him of sexual harassment under the #Metoo campaign in April 2018.

The songs is considered to be Shafi’s befitting response to Zafar who filed a criminal defamation suit against her. Subsequent to which Shafi was subjected to intense cyber trolling. Zafar himself made many statements, in one of which he compared her to Nobel laureate Malala Yousufzai, as women who play antics to gain publicity and then run abroad.

Although Zafar backtracked later Shafi seems to have used medium of lyrics and music to portray and to express her emotions. and this is the anthem hence seems to be her biggest response to #metoo.

In January 2021, the Supreme Court of Pakistan agreed to deliberate on whether Shafi’s allegations, fall under the country’s Protection Against Harassment of Women at the Workplace Act of 2010. While the outcome remains to be seen, this development is being hailed by the lawyers and activists of Pakistan.

George Floyd: In Grave Do They Speak
By Asad Sultan