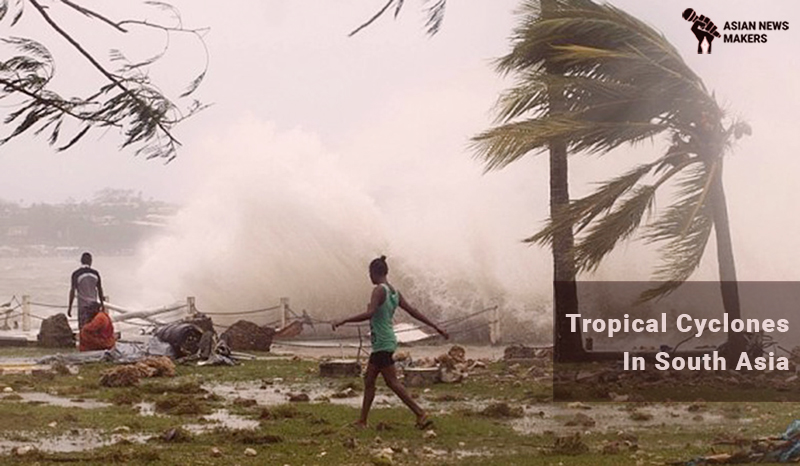 Rising Fury Of The Tropical Cyclones in South Asia

Among environmental anomalies that stand out in their increasing frequency and risks are natural disasters. Having a coastline of 12,000 kilometers and a number of islands, the region is already highly vulnerable to melting ice leads, rising sea levels, storm surges tsunamis and cyclones.

The intensifying rate of natural disasters and calamities in South Asia acquires a double impact in the year 2020 as the region deals with COVID-19-provoked health care challenges. Tropical cyclones in the region which experience a peak around May-June and October-November each year, are a case in point. Water bodies, from where the tropical cyclones emanate, form a core environmental resource of the region.

Majority of the tropical cyclones have their initial genesis over the Bay of Bengal and strike the East coast of India. Exposed to nearly ten per cent of the world’s tropical cyclones and causing a recurrent loss of life and property, the Indian subcontinent remains one of the worst affected regions in the world.

Cyclones are classified by strength of associated winds, storm surges and, exceptional rainfall occurrences in India, which experiences an average of five to six tropical cyclones every year. Two or three out of these could be severe. Cyclones of severe intensity and frequency in the North Indian Ocean are bi-modal in character, with their primary peak in November and secondary peak in May.

The disaster potential, the North Indian Ocean (Bay of Bengal and the Arabian Sea) is particularly high during landfall as the cyclone is followed by destructive wind, storm surges and torrential rainfall. Of these storm surges cause the most damage as sea water inundates low lying areas of coastal regions and causes heavy floods, erodes beaches and embankments, destroys vegetation and reduces soil fertility.

Cyclones may occur frequently on both the coasts (the West coast – Arabian Sea; and the East coast – Bay of Bengal). However, more cyclones occur in the Bay of Bengal than the Arabian Sea and the ratio is approximately 4:1. During May 2020, India was impacted with two cyclones in varying ways, namely Amphan and Nisarga.

The only relief, so to think was that Mumbai- India’s most populous city, which is also badly hit by the Corona Pandemic, escaped being the eye of the storm of cyclone Nisarga. Things remained calm for Mumbai, though damage was recorded in other parts.

Packing winds of more than 100km/h, Nisarga intensified on its approach from the hot waters of the Arabian Sea, there were warnings that this West- coast cyclone would trigger massive storm surges. Gujarat and Maharashtra, however, did not register as much devastation as registered by Kolkatta and Odisha in the east coast with the landfall of Amphan barely two weeks before landfall of Nisarga.

Amphan Amidst COVID-19: A Perfect Storm

Amphan that hit South Asia in May 2020, was an added challenge in Covid 19-infested region. It was a war on two fronts. Around three million people in India and Bangladesh were evacuated to cyclone shelters while Sri Lanka suffered floods as an aftermath to Amphan. Estimated damage caused by Amphan in South Asia has been calculated to be 17.6 billion USD approximately.

Amphan amidst Corona Virus pandemic was a back-breaking environmental intervention and the last thing that South Asia wanted to deal with. Yet, it became an eye- opener to the urgent need for disaster preparedness, whether in terms of managing environmental crisis or the collapsing public health systems.

Amphan amidst COVID-19 also exposes how abandoned and forlorn the situation of South Asia’s most vulnerable populations, among other groups and communities, continues to be. Vulnerable populations, of which the region has no dearth, are exposed to even greater risks during disasters. Nearly half of the world’s indigenous population (around 100 million) live in South Asia.

Data shows that in natural disasters female mortality outnumbers males. Women accounted for 90 per cent of the deaths in a 1991 cyclone in Bangladesh. Marginalized groups e.g. women, the poor, and indigenous peoples are often most vulnerable to climatic anomalies.

Others forced to live in shanties and slums may fare no better during natural disasters: With wind gusts around 100 miles per hour approximately, many Rohingya refugees in Bangladesh, for instance, lost their sleep trying to protect themselves and their makeshift tin and tarpaulin shelters. In the days following Amphan, The First Cases Of COVID-19 were reported from the camps, adding another layer of anxiety and danger to relief efforts.

A Question For South Asia: What is The Message?

South Asia aside from sharing magnificent environmental resources faces a multi-layered politics of environment amidst similar ecological challenges. Its increasing tryst with natural disasters has often become a wake-up call for concerned development experts, civil society and the general public, including policy makers. Surprisingly the policy makers who should have been leading the race to save South Asia’s environment are usually caught lagging far behind: Development and environment remain entangled in a politics of corruption, consumerism and negligence.

Climate change, along with skewed development and resource distribution patterns, brings southern Asian countries face to face with more daunting challenges than the extractive system may have wanted to foresee.

Regionally, the grim conditions that mark the daily lives of a large section of the population in the eight countries keep many deprived of even basic amenities of life.

Issues of public health-care, education, shelter and fundamental human rights, including sustainable livelihoods are questions that beg a deeper political association and solution seeking. COVID-19, the health scourge that is ravaging the world, brings along a special message for South Asia. What is the message?

The spate of natural disasters occurring in South Asia and the response mechanisms of the respective states and local and international humanitarian agencies brings into spotlight the extreme vulnerabilities of the South Asian region.  A climate-change red zone, the region, which is home to more than 1.5 billion people has around 600 million people living below the poverty line. The capacity of the states to respond to humanitarian catastrophes and environmental protection challenges in South Asia is far from satisfactory and very often, embroiled in political gimmicks and propaganda, corrupt projects, wasted time and money.

In such circumstances, the COVID-19 related lockdowns and a forced slowdown of materialistic lifestyles has shown us how the environment can recover all by itself given the right pause and space for rejuvenation: Environment and ecological well-being does not need corrupt money, grand theories and phony projects.

Rather, a healing touch would suffice to accomplish the job: