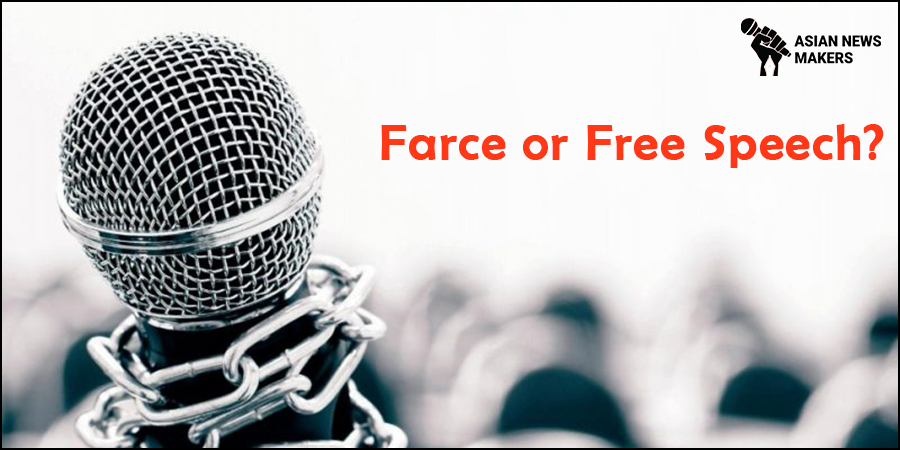 Now that the intolerance debate is over, and it has been established beyond a reasonable doubt that we are a tolerant nation, we can safely discuss the limits of freedom of speech. Back in the bad old days when there was presumed intolerance, people had to be silenced by mob lynching and guns. No more of that uncivilized behaviour anymore. We can do so in a nonviolent civilized way by filing FIRs and slapping defamation cases. That is a massive upgrade.

Had it not been for those in the bad habit of speaking about anything including their elected government, it wouldn’t be required. Earlier it was journalists, writers, authors, and thespians. Now, another breed of so-called champions of free speech, comedians have joined the gang. Stand up Comedians.

The freedom to speak, laugh or breathe has to be balanced with the other person’s right to get offended. Sure thing. If you are breathing air reserved for someone else, you are choking him. If your deafening laughter hurts and jokes make me throw-up, you had better watch out. Now that is a joke but no laughing matter.

Indeed offending anyone is not a good idea, especially, when you laugh at someone’s looks or body size. The person has indeed the right to get offended. Ironically that is often tolerated by the society.

Blatant humour of a popular Indian comedian at the expense of his co-stars in his show is ignored. No one files FIR against him. The problem starts when the jokes laced with truth, blast off the hypocrisy of those in power. The jokes cracked by the stand-up  are rarely personal. Their jokes are about the hypocrisy in the system, religion, society, and that offends people. Indeed, the two most offended set of people, are religious gurus and politicians.

Humour and those thin-skinned diehards

To say you belong to a religion is one thing but to presume that religion belongs to you, quite another. In 2015 the self-appointed defenders of Islam shot Charlie Hebdo employees in Paris. For what? For a few lines, they scribbled to depict prophet! Holy Quran does not explicitly forbid images of the Prophet.

Back home, Munawar Faruqui, the stand-up comedian, spent a few nights in Indore Jail for allegedly cracking anti-Hindu jokes. Now, who gave these people – Hindus and Muslims the proprietary of the religion they were accidentally born into? When did Hindu God ask you to defend them? I am not talking of the political types.

Be offended if a priest of your shrine rapes. Be outraged when your fellow co-coreligionist kills in the name of your religion. That doesn’t happen. You prove your bravado by heckling and harassing a comic whose words were too offending for you.

Religion is not someone’s personal turf that he ought to defend. A person may have the right to get offended if he is body shamed. A guy may take offense for being called fat but it would be rather absurd that he becomes the saviour of all fat people on the planet. A self-appointed policeman to protect all people overweight!

Rules for politicians: Mock but can’t allow to be mocked!

Then the other group of most offended types are the politicians. These are the people who make a joke of the system. But when ridiculed behave sacrosanct above the lesser mortals.

They must not be laughed at. They cannot be poked at. That is the exaggerated sense of self-worth. Napoleon Bonaparte once quipped, “In politics, absurdity is not a handicap”. Exactly – They are a kind of necessary evil but don’t risk telling them that. You could end up in jail.

Indians politicians are known for many things but humor is not certainly one of those, though we have had a few exceptions. Mahatma Gandhi certainly was one. He was never offended when Sarojini Naidu called him Micky Mouse. Piloo Mody often took a jibe at Indira Gandhi. Laloo’s humor is infectious.

Prime Minister Modi too, has a good sense of humour. He pokes fun at his opponents with élan. Though how much he enjoys jokes on him is not clear. We have had the traditions of court jesters or Vidushaks. Hasya Kavis kept the joke alive and roasted the politicians on their face. Today the mantle has passed to stand-up comics.

Political humour and satire is well established in the USA. At the president’s Dinner, people roast the very President who hosted them. The US comedian George Carlin, a fearless stand-up never compromised his right to free speech. Today’s comedians in the US shows owe so much to Carlin.

In India, stand-up comedy started rather late, but comedians have caught up with the rest. Their fearless rendering has made many people uncomfortable and won them the respect and following they well deserve.

In the US, comics can get away with a lot. It is different here. Cases of sedition have been filed against cartoonists, satirists, and artists. That is the price for calling the government bluff. We live in a country where the political system itself is a big joke. In the house, you have a speaker who won’t let you speak. We have lawbreakers making the laws for us. The judiciary judges everything except itself. It is a system in which treasury benches become rich and the opposition gives walkovers to the opponent by walking out.  Is this not a joke worth laughing at?

The comic relief is what even the people in power need. It is a safety valve. A feedback mechanism you cannot get from investigative agencies. Leaders must listen to the laughter of people when a joke on them is told. It gives them a wake-up call. They detest being challenged. But comics give them that “mirror on the wall” that tells them the truth, no matter how disconcerting, free of cost.

Here is my unsolicited advice to those politicians who don’t laugh at jokes. Join a laugher yoga club in your vicinity. It is good for your health. It lowers blood pressure and increases your longevity. It might also increase the longevity of your political career!

Writer is a senior journalist, views expressed are personal